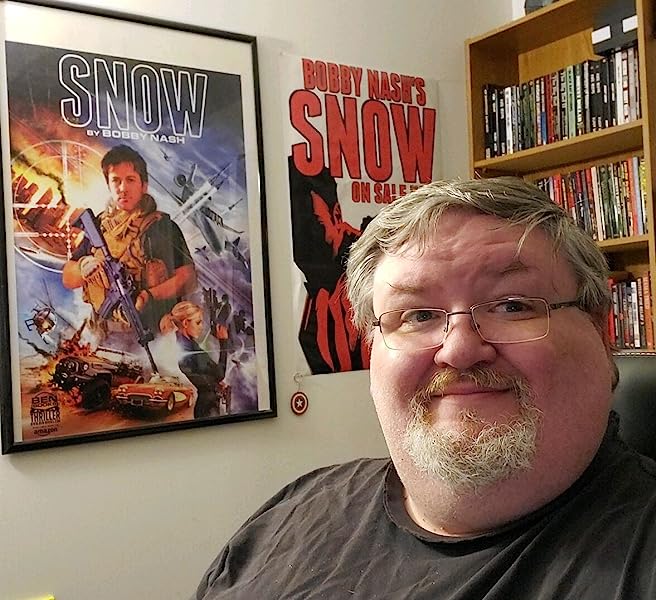 by Bobby Nash (Author), Jeffrey Hayes (Illustrator)
See all formats and editions
Sorry, there was a problem loading this page. Try again.

SOME SECRETS SHOULD STAY BURIED…

No one talks about it, but everybody knows what happens in the trailer on Dogwood Alley. Steve Conrad, Sommersville High’s star quarterback and all-around golden boy, headed to the trailer anticipating a night that would change his life. The last thing he expected was to witness a cold-blooded murder or to find himself chased by the killers.

When a brutal double homicide rocks Sommersville, the Sheriff’s department moves quickly to investigate. What Sheriff Tom Myers and his deputies discover is a decades old secret, deception, danger, back-door deals, and a betrayal that could rip their peaceful small town asunder.

Sheriff Tom Myers returns in SUCH A NIGHT, an all-new mystery/thriller from award-winning author Bobby Nash and BEN Books.

Fans of Justified and Longmire will find a lot to love in this series.

Get 90 days FREE of Amazon Music Unlimited
with the purchase of any eligible product. Shop now
Start reading Such A Night: A Tom Myers Mystery on your Kindle in under a minute.

He was named Best Author in the 2013 Pulp Ark Awards. Rick Ruby, a character co-created by Bobby and author Sean Taylor also snagged a Pulp Ark Award for Best New Pulp Character of 2013. Bobby has also been nominated for the 2014 New Pulp Awards and Pulp Factory Awards for his work. Bobby's novel, Alexandra Holzer's Ghost Gal: The Wild Hunt won a Paranormal Literary Award in the 2015 Paranormal Awards. The Bobby Nash penned episode of Starship Farragut "Conspiracy of Innocence" won the Silver Award in the 2015 DC Film Festival. Bobby's story in The Ruby Files Vol. 2 "Takedown" was named Best Short Story in the 2018 Pulp Factory Awards, one of five nominations for The Ruby Files Vol. 2 (created by Bobby Nash & Sean Taylor). Bobby's digest novel, Snow Drive was nominated for Best Novel in the 2018 Pulp Factory Awards. Bobby was part of Moonstone’s Yours Truly, Johnny Dollar, which won a 2020 Pulp Factory Award for Best Pulp Anthology. Bobby’s novel, Nightveil: Crisis at the Crossroads of Infinity was also named Best Pulp Novel in the 2020 Pulp Factory Awards. In 2020, The Sangria Summit Society awarded the New Pulp Fiction Award to Bobby Nash for his work on Snow Falls and the Snow series.

For more information on Bobby Nash please visit him at www.bobbynash.com, www.ben-books.com, and across social media.