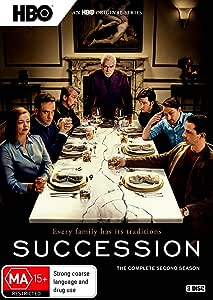 Emmy-nominated 'Succession' returns, exploring themes of power, politics, money, and family, played out within a rich and dysfunctional family whose patriarch, Logan Roy, is CEO of one of the world’s largest media and entertainment conglomerates. With the future looking increasingly uncertain and the past threatening to destroy them all, each of Logan’s four children remains focused on their personal agendas. Blending high drama with sharp humor, 'Succession' follows the Roys as they navigate a rapidly changing media landscape and the looming question of who will take over in a post-Logan world.

4.7 out of 5 stars
4.7 out of 5
130 global ratings
How are ratings calculated?
To calculate the overall star rating and percentage breakdown by star, we don’t use a simple average. Instead, our system considers things like how recent a review is and if the reviewer bought the item on Amazon. It also analyses reviews to verify trustworthiness.

Micheal Elkington
5.0 out of 5 stars "It's time for a blood sacrifice"
Reviewed in the United Kingdom on 2 October 2020
Verified Purchase
It is nigh on two years since we first encountered the Roy family in all their individual ghastliness which made watching the first Season of Succession such compulsive viewing. At last we come to Season 2 which picks up events almost immediately following Kendall Roy's abortive bid to overthrow his Father Logan as Head of the Waystar RoyCo the multimedia conglomerate.

There are two main strands to Season 2 - the first concerns a proposed takeover of another News Media outlet PGM owned by the Pierce Family headed by Matriarch Nan Pierce and long standing rivals of Logan Roy. Then the historical allegations of murder and sexual misconduct involving the Cruises Division of Waystar which first came to light in Season 1 and which were covered up by Logan's Son-in-law Tom resurface which leads to an appearance before a Senate Congressional Committee.

All the leading characters re-appear (including yet another sparkling cameo performance from Harriet Walter as Logan's second wife) with the addition of Holly Hunter as Rhea Jarrell the CEO of PGM who aligns herself with Logan in the takeover bid. Logan's eldest Son Connor is pursuing his nascent political career by announcing his candidature for the Presidency of the U.S.A. Second son Kendall is initially in rehab for his drug addiction but returns in a much traumatized and chastened fashion to involvement in Waystar's business at the behest of his Father. Meanwhile the newly married Daughter Shiv quits her career as Political Strategist to also be involved in Waystar on the understanding that Logan will in due course name her as his successor as Head of the Company and her husband Tom is given the responsibility of running ATN the News Division. Youngest Son Roman's main interest is in trying to arrange the necessary financing to enable Logan to take Waystar private in the event of the Company Shareholders deciding in favour of the hostile takeover bid for the Company by Stewy and Sandy.

Without giving away any plot spoilers I would just say that Season 2 ends with a surprise twist which will give rise to further machinations in Season 3. Let's just hope that filming of this can begin before too long as there's plenty of mileage left to see how the Roy family deal with their various trials and tribulations.

There are a number of exotic locations employed in Season 2 including a hunting lodge in Hungary the Family yacht moored in the Greek Islands plus visits to London and Dundee (to celebrate Logan's 50 years in charge of Waystar) all of which add lustre to the high production values we expect from a programme of this quality. One thing that did occur to me is that the somewhat mangled Minnesotan accent employed by Mathew Macfadyen in Season 1 seems to have been ironed out a bit which makes him more understandable but this shouldn't be taken to mean that the dialogue he utters is any more comprehensible as a result ! It's a masterclass in "computer management speak" and it's a credit to him as an actor that it is so believable.

Audio : English and French
Subtitles : English for the Hard of Hearing / Dutch / French and Polish
Extras : An Invitation to the Set by the Series Storytellers and 10 Within The Episode Featurettes.

As has been previously noted there is no Blu Ray Edition !

Adrian Drew
5.0 out of 5 stars Outstanding but quite shocking too for various reasons!
Reviewed in the United Kingdom on 7 December 2020
Verified Purchase
Brilliant, witty and occasionally shocking, this dazzling series is so much better than most of the material that we are producing in the UK these days. The cast are uniformly excellent and the ideas relevant, original and challenging. Our British TV companies need to take some lessons about scripting, plotting and casting from shows like this if we want to compete with other countries productions. Instead they underestimate the intelligence of their audience with over-simplistic series, some often crudely left wing, (particularly those commissioned by the BBC) and fail to appeal to any demographic, as is clear from collapsing audience numbers. U.S. shows like Succession, The Good Wife, Suits, and The Americans, etc etc are superior in every way to the vast majority of British indigenous productions these days - which is both worrying and very sad. A new series of Succession is planned with the Brits, Lucy Prebble, Brian Cox and Matthew Macfadyen as part of the mix. How I wish their talents could grace a UK produced series of similar quality.
Read more
Report abuse

Julia27
5.0 out of 5 stars Succession: Season 2 DVD
Reviewed in the United Kingdom on 30 November 2020
Verified Purchase
Considering that we're going through a global pandemic, this Supplier provided an excellent & prompt service. The plots & twists in season 2 of Succession are even better than in season 1, it will have you guessing all the way through! I highly recommend this & I can't wait for Season 3!
Read more
Report abuse

Diane
5.0 out of 5 stars Massive 5 stars
Reviewed in the United Kingdom on 24 November 2020
Verified Purchase
I just love this drama and all the characters Really enjoyed series 1 & 2 looking forward to series 3 would highly recommend
Read more
Report abuse

Mannie53
5.0 out of 5 stars Brilliant
Reviewed in the United Kingdom on 18 January 2021
Verified Purchase
Brilliant series......can’t wait for season 3
Read more
Report abuse
See all reviews
Get FREE delivery with Amazon Prime
Prime members enjoy FREE Delivery and exclusive access to movies, TV shows, music, Kindle e-books, Twitch Prime, and more.
> Get Started
Back to top
Get to Know Us
Make Money with Us
Let Us Help You
And don't forget:
© 1996-2020, Amazon.com, Inc. or its affiliates