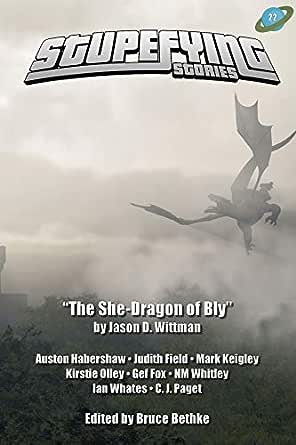 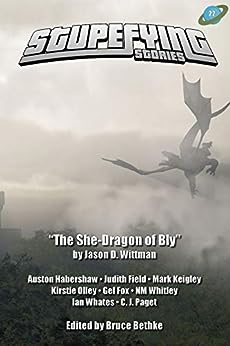 Rampant Loon Press is excited to announce the release of Stupefying Stories 22, featuring the terrific new cover story, THE SHE-DRAGON OF BLY, by Jason D. Wittman. In an alternate timeline in which the Soviet Union won WWII, England is now a Soviet satellite, some magic actually works, and Premier Kruschev is going eyeball-to-eyeball with President Patton, the last surviving member of His Majesty’s Dragonslayer Corps is pulled out of retirement because it seems dragons are not extinct after all, and one has taken up residence in a prominent Politburo member’s country estate. Here there be dragons, indeed!

A beautiful princess, kidnapped and locked away in a sorcerer’s tower. A deadly labyrinth, filled with traps and monsters. So, Mr. Handsome Prince, before you go charging in there with your sword swinging, did it ever occur to you to wonder who *maintains* the labyrinth?

Gef is one of our original contributors, beginning with “A Wolf Like Leroy” in Stupefying Stories #8. “Rain Charmer” is his latest story for us, and it’s a wonderful little contemporary fantasy about... well, about rain. And about being careful what you wish for.

A terrific next-century science fiction tale set in a world in which the United States is still recovering from the effects of the Second Civil War, the Japanese, Koreans, and Russians are all jostling for position in the Chinese shadow, and someone has discovered a new power source that seems too good to be true...

UPON THE BLOOD-DARK SEA • by Auston Habershaw

Now here be a tale of pirates, dark magic, and darker deeds, spun by master storyteller Auston Habershaw, whose name you may recognize from his appearances in F&SF, Analog, and Galaxy’s Edge, or from his many epic fantasy novels. One of his first published stories, though, was THIEF OF HEARTS in Stupefying Stories #7, and he’s been a frequent contributor ever since.

THE FISHERWOMAN • by C.J. Paget

Pirates, ghosts, kids on a summer adventure: what’s not to like? Loads of fun.

A paranormal mystery caper, set in a world in which parallel versions of London exist in overlapping space/time but only those with the gift can cross between them, and a stolen magical artifact might have the power to destroy them all. The chase is on!

A terrific hard-SF generation ship story with Keigley’s usual totally out of left field “Whoa, didn’t see that coming!” twist. Clever ideas; great fun—albeit with a dark edge that should stick with you long after you’ve finished the story.

GLAMOUR FOR TWO • by Judith Field

Finally, we end this issue with GLAMOUR FOR TWO, another sweet and clever little contemporary fantasy story from Judith Field. We’ve been in love with Judith’s writing ever since THE PROTOTYPE first showed up in our inbox. If you haven’t yet read her short-story collection, THE BOOK OF JUDITH, this story will be a good introduction. If you have read it, you’ll be happy to know that this is her first new “Court & Anderson” story in years.

From magic to mystery, to science fiction so hard it clanks, here are nine tales to chill, thrill, excite and amuse you. Always fresh and entertaining, never formulaic or predictable, Stupefying Stories is the terrific new reading you've been looking for!
click to open popover

It's the latter that draws me most easily (and the reason I gave the issue a 4 -- I'd have given it a 4.5 if I could have). The offerings here, like "With Possum You Get Were-fi", a chilling take on interstellar colonization, and the (multiple) alternate histories of London in "The Yin Yang Crescent", which adds a new tweak to the alternate timeline trope; are the kind of stories that not only entertain, but set me to thinking.

Given all of that, Jason Wittman's "She-Dragon of Bly" is a mix of history (both alternate and real!), science fiction, fantasy, and then to really confuse matters, there's ROMANCE!

Buy it -- you'll find something to love and lots to like!

Arisia
5.0 out of 5 stars Another great Stupefying Stories collection
Reviewed in the United States on 4 December 2018
Verified Purchase
The story I like best in this issue is the cover story, The She-Dragon of Bly, by Jason D. Wittman. It is simply delightful. Second best is impossible to pick, since there are so many good ones.
Read more
One person found this helpful
Helpful
Sending feedback...
Thank you for your feedback.
Sorry, we failed to record your vote. Please try again
Report abuse

avidreader
5.0 out of 5 stars Excellent collection, great price
Reviewed in the United States on 10 May 2019
Verified Purchase
All of these stories were good, a couple were exceptional. I also love that this series allows me to indulge my spec fiction habit without breaking the bank.
Read more
Helpful
Sending feedback...
Thank you for your feedback.
Sorry, we failed to record your vote. Please try again
Report abuse