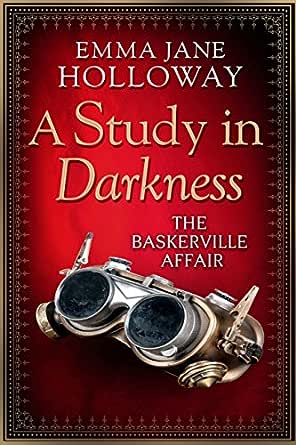 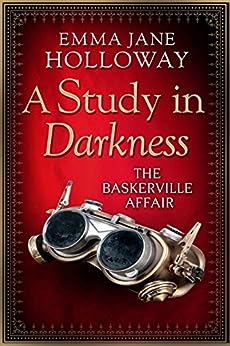 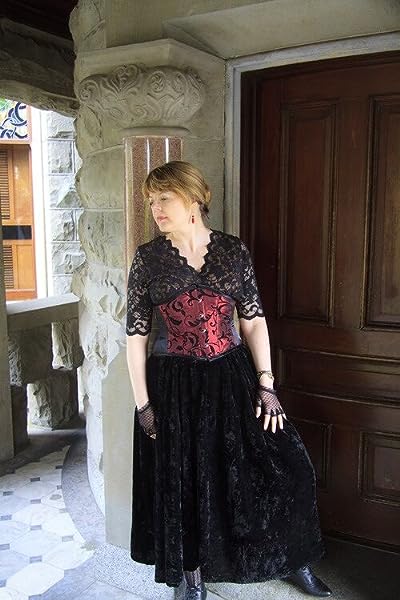 A Study in Darkness (The Baskerville Affair) Kindle Edition

Praise for Emma Jane Holloway's A Study in Silks

"This book has just about everything: magic, machines, mystery, mayhem, and all the danger one expects when people's loves and fears collide. I can't wait to return to the world of Evelina Cooper!"--Kevin Hearne, New York Times bestselling author of The Iron Druid Chronicles "As Sherlock Holmes's niece, investigating murder while navigating the complicated shoals of Society--and romance--in an alternate Victorian England, Evelina Cooper is a charming addition to the canon."--Jacqueline Carey, New York Times bestselling author of the Kushiel's Legacy series

"Holloway takes us for quite a ride, as her plot snakes through an alternate Victorian England full of intrigue, romance, murder, and tiny sandwiches. Full of both thrills and frills."--Nicole Peeler, author of the Jane True series "A Study in Silks is a charming, adventurous ride with a heroine who is both clever and talented. The brushes with the Sherlock Holmes mythos only add to the fun of this tale, and readers are bound to fall in love with Evelina and the London she inhabits."--Philippa Ballantine, author of Geist

"In A Study in Silks, Emma Jane Holloway has created a wonderful reimagining of the Sherlock Holmes mythos set in a late-Victorian Britain ruled by nefarious industrial titans called steam barons. Holloway's clever writing, attention to detail, and sublime characters forge a fascinating world that combines brass-plated steampunk technology with magic. By turns a coming-of-age story, a gas-lamp thriller, and a whimsical magical fantasy, A Study in Silks is the premiere novel of an author to watch."--Susan Griffith, author of the Vampire Empire series "Holloway stuffs her adventure with an abundance of characters and ideas and fills her heroine with talents and graces, all within a fun, brisk narrative."--Publishers Weekly

"Splendid . . . The characters are thoroughly charming and the worldbuilding is first-rate."--RT Book Reviews (four stars) --This text refers to an alternate kindle_edition edition.

When a bomb goes off at 221B Baker Street, Evelina Cooper is thrown into her uncle Sherlock's world of mystery and murder. But just when she thought it was safe to return to the ballroom, old, new, and even dead enemies are clamoring for a place on her dance card. --This text refers to an alternate kindle_edition edition.

Ever since childhood, Emma Jane Holloway refused to accept that history was nothing but facts imprisoned behind the closed door of time. Why waste a perfectly good playground coloring within the time lines? Accordingly, her novels are filled with whimsical impossibilities and the occasional eye-blinking impertinence—but always in the service of grand adventure.

An award-winning author of both historical and urban-fantasy romance, Holloway has an honors degree in English literature. Writing as Sharon Ashwood, she won the RITA award for paranormal romance for the third book of her Dark Forgotten series. She lives in the Pacific Northwest and is owned by the Demon Lord of Kitty Badness. --This text refers to an alternate kindle_edition edition.
Read more

illegiblescribble
4.0 out of 5 stars Enjoyable series, but I wish it would have had less Romance and more Smart Protagonist. (3.5 stars)
Reviewed in Australia on 11 February 2017
What I really enjoyed about this series (A Study in Silks, A Study in Darkness, A Study in Ashes):

What I could have done without:

- protagonist's seemingly endless dithering about men, and treacly romantic scenes (to be fair, it *is* marketed as Paranormal Romance)
- protagonist continually set as Damsel in Distress (kidnapped, trapped, imprisoned), only being freed by the next captor or by accident, rather than by her own ingenuity, skill, and pluck
- resolution of the series where most important thing, sadly, seems to be the protagonist getting married to her man

If you like Gail Carriger's Parasol Protectorate series, you will probably enjoy this one.

If you'd rather bypass the treacly romantic stuff, this series might be too much for you.

Angel7
4.0 out of 5 stars Exciting, unexpected, had to get the 3rd book
Reviewed in Canada on 11 January 2014
Verified Purchase
Two stars because the first book made me care about the characters. Third star because I really wanted to know where she was going with the characters in the sequel. Fourth star was for skewing Sherlock Holmes fictional character into a believable 'uncle' with a magic wielding niece detective. And...the writing style is intelligent (had to look up some of the words :)); sometimes dark yet mixed with humor and interesting insight.
Read more
One person found this helpful
Report abuse

J. Cardone
2.0 out of 5 stars Pretend that Evelina is the niece of a random Scotland Yard detective, not Sherlock Holmes
Reviewed in the United States on 19 August 2014
Verified Purchase
I left a 4 star review for book 1, but after book 2, I am not sure that I am going to finish the series. Book 1 had a few flaws, but was a solidly enjoyable adventure. Unfortunately, in Book 2 those flaws get magnified to the point where it interfered with my enjoyment of the story. In fact, I pretty much hated the beginning and ending of this novel. The only reason I managed to read through to the ending was because the Jack the Ripper storyline was so well executed.

What went wrong? Let's start with the fact that I bought Book 1 partly because Evelina was the niece of Sherlock Holmes, which meant I expected her to actually solve some mysteries. In Book 1, she did a little bit of sleuthing and solved a few puzzles, but the big mysteries that kicked off the series were left dangling. Evelina, I thought, would surely get around to solving those in Book 2 - especially since I thought that at least one solution was obvious and that Evelina would surely figure it out. I mean, Evelina's entire reason why she is special is that she is talented in both magic and in building clockwork machines. You would think she would be able to unravel a mystery involving an evil magician and the automatons he built. But no. We are repeatedly told that Evelina is intelligent, but she does not solve mysteries in Book 2 unless she accidentally stumbles on the answer.

I repeat, despite constant reminders from the author that Evelina intelligent and is related to the famous detective, we rarely see her use her brain. This is not good writing.

Speaking of mysteries, twice in this series a character who is not Evelina learns a key piece of information by hiding in a closet and overhearing a conversation. TWICE. (And both times, not the niece of the famous detective, who could have at least then used that info to try to solve a mystery.)

But the number one thing that made me angry at this novel occurred at the very beginning. The author clearly wants us to think of Keating as a master manipulator and a puppet master, but his tactics are blunt, inelegant and, quite frankly, make absolutely no sense. They do not feel like the elegant spiderwebs of a born diplomat or even the business plans of a mob boss. They just feel like the author using him to force Evelina into romantic situations - oh, and sometimes it advances the plot, too. And more importantly, when Evelina repeated falls for these "traps", she looks dumb - not the intelligent image the author was hoping for.

The scene between Evelina and Keating was so awful that it cast a pall over everything that came after. Even some of the extraordinarily well-written Whitechapel/Jack-the-Ripper scenes had the shadow of "BUT EVELINA IS HERE FOR A STUPID REASON" hanging over them.

The ending was a not-quite-as-bad-but-still-bad piece of nonsense between Keating and Evelina, which sets us up for Book 3. There was a sample chapter of Book 3 at the end of Book 2. Evelina does something incredibly stupid, but which we are supposed to believe was an incredibly brave attempt to gain an education. I will not be reading Book 3.
Read more
6 people found this helpful
Report abuse

JLD
5.0 out of 5 stars I love the writing, the tone and even the moderate bit of romantic intrigue...
Reviewed in the United States on 29 September 2015
Verified Purchase
A Study in Darkness (The Baskerville Affair Book 2)by Emma Jane Holloway

Following up from the first book is the long awaited (I was waiting for the paper copy to show up in the mail) sequel. This one is no disappointment. But be prepared this is for lovers of epic tales who have the time for an epic book that makes the reader turn each page with anticipation.

We return to the world of Evelina Cooper, niece to Sherlock Holmes. Her lover from the circus, Nick, has stolen Athena, the air spirit, and has made an airship to give Athena the skies while he becomes a pirate. While her lover from society, Tobias, has forged an alliance with the Gold King, and is soon to marry the Gold Kings daughter to further cement that relationship. Imogen, Tobias's sister and Evelina's best friend, is further troubled by nightmares and soon to be ever more troubled that they might not just be nightmares. Evelina, betrayed on both sides, has removed herself from London, and now is returning to resume her life and hopefully avoid the trouble of marriage in hopes of gaining further education. She returns to find that her uncle is under attack from several of the various ‘kings’ of England.

These are only a few of the threads that weave through this novel and I can assure you that you will need a stack of 3 by 5 cards to keep track of everything and everyone in this story. Evelina will have the usual struggles and challenges that would hamper any independent minded young woman in 1888 England, but she will also be faced with some tough choices involving her friends.

Following the same tradition of Steampunk aka GasLamp and paranormal fiction Emma Jane Holloway has crafted a strange new world of magic and mechanics that thrust the reader forward in unstoppable motion.

I love the writing, the tone and even the moderate bit of romantic intrigue that help drive the characters past fortune and folly through a slightly altered yet familiar landscape.

Definite must for lovers of Paranormal Gaslite Romances and even a few of the Sherlock Holmes aficionados should love this bit of diversion in the Canon.