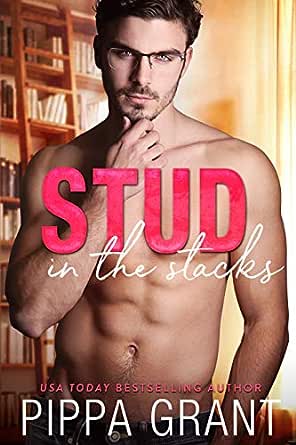 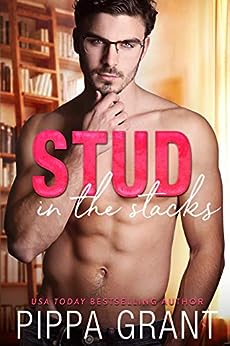 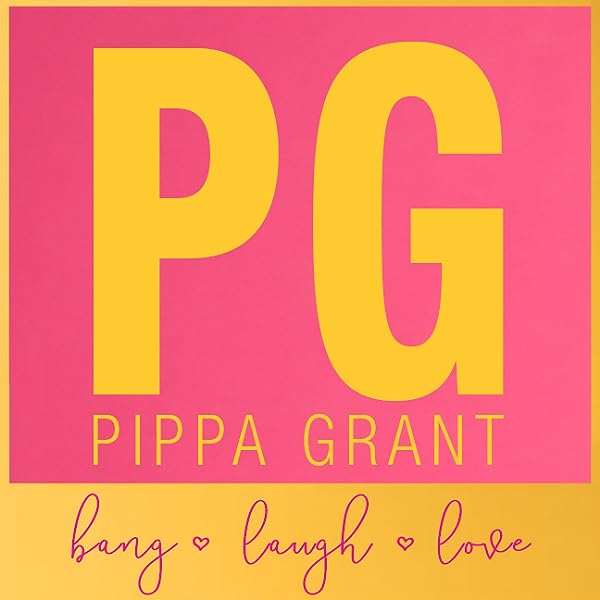 Stud in the Stacks Kindle Edition

JayCee
5.0 out of 5 stars First time reader. Possibly long term fan
Reviewed in Australia on 9 November 2018
Verified Purchase
This is my first Pippa Grant story and I chose it simply because a male, romance reading librarian is unheard of as far as I know, and as of now, number one on my book boyfriend list! He can come knox knox knoxing on my door any time he likes. I also identified with Parker in oh so many ways. Her insecurities, her sucky high school experience, and...#bleep bleep bleep#. The story was real, heartfelt, snort out loud hilarious, and I aspire to one day be as awesome as Knox's grandmother. Definitely be purchasing more stories in this series!
Read more
Helpful
Comment Report abuse

Casey Leigh
TOP 1000 REVIEWER
5.0 out of 5 stars Swoon worthy Mr Romance
Reviewed in Australia on 15 September 2019
Verified Purchase
Where can I meet my own Stud in the Stacks?
An intelligent man who knows romance and can hold a decent conversation (sigh). When swoon worthy Knox crosses paths with the hot mess that is Parker sparks will fly, maybe the odd witty comment or fist.

I absolutely loved this book, now must read others in the series.

How could you not with a first paragraph like this .....
'Even though it’s been six years since I stripped for a roomful of women, I’m pleased to report my loincloth still fits in all the right places. Tad more snug in front than I remember, but if I had to grow, might as well be in the junk.'

Knox and Parker are my favourite characters so far and the support characters are all really great and all deserve their own books but so far it's just Sia and Chase (if you are reading them in suggested order) but Willow is up next (happy dance).

It is one of those books that makes you smile the whole way through and also makes you laugh out loud. Not easy to stop reading.

Parker is easy to relate to and we all deserve a Knox in our lives (but not Parker's phone, which is hilarious in itself, don't believe me, just you wait).

Robyn Corcoran
TOP 500 REVIEWER
4.0 out of 5 stars Terrific fun
Reviewed in Australia on 5 January 2018
This is the first book by this author that I have read and I thoroughly enjoyed it. It is an easy to read, fast paced story that will have you craving more from her.

Parker is a socially awkward girl with a mission and confident librarian, Knox, could be the answer to Parker being successful.

From the beginning the story projects a great sense of fun, whether it is the character's reactions to things or about themselves or even different scenes, some good old fashioned chuckles were produced. This is an example of the nifty way this author has with words- 'I groan and wonder how much longer I can stay standing with my wonder dragon suffocating in my jeans.' (Knox thinking to himself)

This truly is a fabulous romance first and foremost however there are underlying elements that are smoothly woven into the story. Issues like low self confidence, self doubting and stereotyping all make appearances and play important parts.
Told by both lead characters we gain a deeper insight into their personalities as well as the issues mentioned.

The intimacy between Parker and Knox is off the charts hot, hot, hot!

Another wonderful aspect of this novel is the recommendations of books and authors scattered throughout. I kept exploring each one and yes did go shopping on more than one occasion! 😂
Read more
Helpful
Comment Report abuse

Elaine Watling
TOP 1000 REVIEWER
4.0 out of 5 stars It was a fun and lovely read which I really enjoyed
Reviewed in Australia on 5 January 2018
This is my first book read of 2018 and first book I’ve read by Pippa Grant. It was a fun and lovely read which I really enjoyed. We meet Knox Moretti, he’s a librarian and also a very popular romance blogger known as Mr Romance. He attends a charity auction, wearing his Tarzan Loincloth, and is immediately attracted to the stunning women who bids $50,000 for a date with him, sadly she is immediately outbid by another women wo pays $100,000 to win the Auction. Parker Elliot attend a bachelor auction inn the hope of winning a hot guy to be her fake fiancé and attend her high school reunion. She bribed her boss to give her $50,000 which she thinks will be enough. Sadly she’s outbid on “Tarzan”.

When it comes to women Knox knows exactly what they want. He’s worked in a library for years, read thousands of Romance books. Every morning when the library opens there is queues around the block, unfortunately this hasn’t helped Knox, he’s made a few bad decisions and now his reputation has put his job in danger. Parker needs a man to pretend to be her fiancé and attend her high school reunion. Can Knox and Parker help each other??? Will their friendship turn into more??? This was a great first read for the year and one I thoroughly enjoyed.
Read more
Helpful
Comment Report abuse

Em Jay Reads
TOP 500 REVIEWER
4.0 out of 5 stars This is sexy, flirty and bawdy read. It’s fun!
Reviewed in Australia on 5 January 2018
This is the kind of romance book that can easily polarise readers. You’re either going to be snorting with laughter, cackling at the innuendos or you’ll be rolling your eyes at the crassness of it all. I fall into the group of snorting cacklers.

Foremost, this book pays homage to romance books and romance book readers. Knox Moretti, aka Mr. Romance, and our hero is a librarian and romance book blogger. He exhibits many traits of hardcore romance readers; his Kindle is filled with books, he is quick to recommend a book based on tropes, he wants to convert others, he gifts books to aid in said conversion, and he regularly consults his Goodreads shelves. I found myself highlighting all of the books Knox recommended and I admit to adding a few to my own Goodreads shelves.

Parker Elliott, the heroine, propositions Knox into playing her fake fiancé at her school reunion where an important business contact will be attending. Parker had a horrible time at high school and as a result never really shook off her insecurities. Add in several failed relationships and a perpetual case of foot-in-mouth syndrome, Parker is still a bundle of awkwardness 20 years later.

Knox and Parker embark on this fake relationship and it takes little time for the attraction to flare between them. These two really know how to get it on. But they both agree to a casual arrangement since neither is looking for commitment. Ah, the delusions of romance book characters...

There are many humorous and laugh out loud moments both between Knox and Parker as well as other secondary characters. And as funny as these characters were, there were just too many of them. After a time I found it hard to kept them all straight. I gave up and just went along for the ride.

Mrs B's Books
4.0 out of 5 stars Loved this
Reviewed in the United Kingdom on 6 May 2019
Verified Purchase
I found this book very entertaining and the author has a great writing style that is really pulling me in, so much so, that i am going to have to read the next book in the series and the next lol.

I loved that Know is a Romance reader and a librarian, be still my beating hormones. Just having a man that reads would be nice for me lol, my husband does not read books at all to my horror.

I liked Parker and yes, she did have issues, but i did find her endearing. I also loved how she got her mojo back with Knox helping her to feel better about herself and shoring up her self worth.

I liked that we got to see prevue characters in this book too and look forward to seeing how the rest of the characters lives play out.
Read more
Report abuse

AMC
5.0 out of 5 stars Swoon!!
Reviewed in the United Kingdom on 24 May 2018
Verified Purchase
I want my own Knox, please and thank you. He's sweet, sexy and he loves to read Romance novels. Sigh.
This story is funny, sweet, funny, hot, funny, angsty and just a little fun to read. I laughed out loud, a lot. Pippa Grant is an amazing writer with a wicked sense of humour. Definitely a must read (as are all her books).
Read more
Report abuse

Kindle Customer
5.0 out of 5 stars Laughing out loud while reading is a good thing
Reviewed in Canada on 24 November 2018
Verified Purchase
Ms. Grant has come up with a series of books that will keep you laughing after you close the books.
Start at the beginning of her set, not more than halfway through like I did, although I am still going to go to the beginning and read them.
Great storylines, great characters and fiesty nasty mouthed grandmas are waiting for you.
Read more
Report abuse

Sandra
4.0 out of 5 stars Fantastic book!
Reviewed in Canada on 19 May 2019
Verified Purchase
I loved the concept of a male HOT librarian who loves romance novels. The storyline and characters were great and I really loved Knox's book recommendations. I found myself pausing my reading to check out them out and have greatly expanded my TBR bookshelf.
Read more
Report abuse

Michele Beauvais
5.0 out of 5 stars Five Stars
Reviewed in Canada on 21 July 2018
Verified Purchase
❤❤
Read more
Report abuse
See all reviews
Get FREE delivery with Amazon Prime
Prime members enjoy FREE Delivery and exclusive access to movies, TV shows, music, Kindle e-books, Twitch Prime, and more.
> Get Started
Back to top
Get to Know Us
Make Money with Us
Let Us Help You
And don't forget:
© 1996-2020, Amazon.com, Inc. or its affiliates