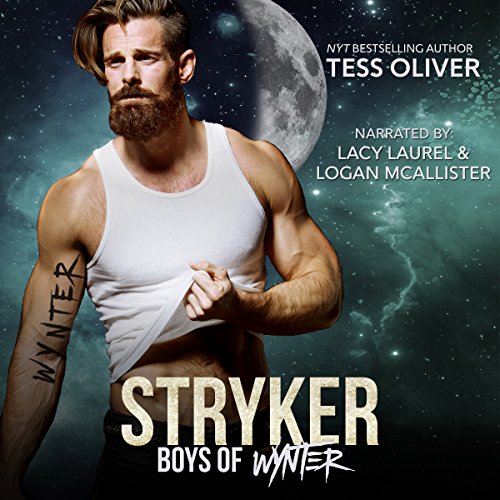 justtrees
4.0 out of 5 stars A great entertaining read
Reviewed in Australia on 22 June 2017
This book is classic Tess Oliver. Lots of sexy scenes, loveable characters, great story telling with a good level of drama and action, enjoyable humour and a really interesting supernatural storyline.
As a hopeless romantic I always enjoy books by this author and this book was just awesome.
Highly recommend to Tess Oliver fans, hopeless romantics and lovers of paranormal romance.
Read more
Helpful
Report abuse

Andi
4.0 out of 5 stars Great supernatural series
Reviewed in Australia on 29 June 2017
Enjoyed reading the first book in the boys of wynter. Each book can be read as a standalone which is always a plus in my book. If you like supernatural romances, werewolves and great writing then this one's for you.
Read more
Helpful
Report abuse
See all reviews

Paranormal romance is my jam. I love the mysticism, magic and thrill of a make-believe world filled with angels, demons, gods, goddesses, vampires or shifters. Anything can happen and come alive in a supernatural romance, when you're able to suspend your disbelief in the seemingly impossible. When I heard one of my absolute favourite authors was writing in this genre, I was ecstatic, but nothing could have prepared me for the intricacy, beauty and startling imagination involved, in making Stryker and the Boys of Wynter and the fierce, powerful women that fight alongside them, come alive on every page.
These boys are BAD. A$$. All capitol letters. Sexy, alluring and dangerous, these guys burst into our lives in a roaring, flaming, dramatic, chaotic whirlwind from the get go.

'"What do you think? Do we live up to everything you've no doubt heard?"
I cast a half smile in Stryker's direction. He, too, waited for a response. "Let's just say you guys are everything I expected, and you are nothing I expected."'

I love this line in particular as it manages to encompass the entirety of this book without actually revealing anything. It's exciting, suspenseful, erotic and takes everything I love about the paranormal genre and expands upon it. There's just more of everything. A more in-depth plot, terrific complicated and magical protagonists, sinful side characters and some really beautiful dialogue.
Stryker is our bad boy hero. A man who takes his destiny as a protective warrior seriously. A man with a notorious reputation, who not only manages to pull off the uber cool, motor-cycle riding, fighting, bad a$$ legend but also the loyal, honourable and deeply in love champion.
Willow was the very definition of a heroine. Sweet but fierce. Empathetic and strong. Innocent and lonely. Individually Willow and Stryker are stunning and engaging but together they are a supernatural force to be reckoned with.

'"It was worth it," I told her. "I will take every minute I spent with you to my eternity. It won't matter where I spend it as long as I have that."

This book is enticing and exciting, even for those readers who are on the fence about trying the paranormal romance genre. It's difficult, not to be swept up in this magical, epic battle for survival, brotherhood and falling in love when you least expect it. With the creative setting and flowing dialogue from author Tess Oliver, Stryker is the beginning of a superb and fantastical series for the Boys of Wynter.
Read more
Report abuse

Hanbarn
3.0 out of 5 stars Different
Reviewed in the United Kingdom on 26 June 2017
Verified Purchase
Different kind of book and wish I'd paid more attention to other reviews. Reads a bit like a young adult book and more paranormal. Not a series I'll be buying into.
Read more
Report abuse

Donna Gardner
5.0 out of 5 stars Stryker
Reviewed in the United Kingdom on 29 July 2017
Verified Purchase
OMG, this is such a superb story, plenty of action all the way through, I've thoroughly enjoyed this book. With more to come even better!!!!!
Read more
Report abuse

Loraine Oliver
5.0 out of 5 stars Stryker (Boys of Wynter Book 1) ... A Great Paranormal Story and a Great Start to a New Series!
Reviewed in the United States on 18 June 2017
Verified Purchase
Stryker is the first book of Tess Oliver's new paranormal series Boys of Wynter, #1. I am really excited about this series as it is paranormal, with a lot of other things as well. In book 1 we find out what it means to be a Boy of Wynter, where they live and where they party hearty! We also learn how dangerous their jobs are. We also learn that even though their jobs are brutal, there is hope for romance as well! The boys job is to keep the mortal world safe from evil, wraiths and demons, that live in the shadows of the underworld. Stryker is one of the most fierce and dangerous man to walk the earth to protect humans that have no idea what is going on in their world.

Willow is a beautiful creature who is part angel and part nymph, and has been living in the wilderness on the human side of the world for over two years taking care of the wild animals. She is like a guardian to the animals and they come to her for help. Willow is also sad and lonely. She was sent from the angel's realm to hide her from the Lord of the Underworld who blackmailed her father, (an archangel) who had relations with Willow's mom, a nymph. It is into this mess that Stryker falls down, right in her yard and can't get back up.

This is the story of what happens between the two of them, a beautiful angel/nymph and a Wild Boy of Wynter. There is so many good things about this story, and we also get to learn about some of the future characters in the next books. We also realize there is a plot underneath everything on the surface about Stryker, that only the woman who raised him knows.

This book has a lot of scary scenes between hunters and wraiths, demons, and Underworld figures, but it also has a lot of romance and great scenes between Willow and Stryker and the end will surprise you! After all that's what this author does, you expect something to happen and Tess will put that final twist in the plot! I loved this book and can't wait for book 2, another Boys of Wynter story!

I am giving this book a 5*****star rating, and it deserves it. I love all of Tess Oliver's books, but she is writing a little bit differently, with this paranormal series, but do not let the title "paranormal" throw you off track as it is every bit as good as a hot romance, love, lust, great alpha men and a little mystery all rolled into one!
Read more
4 people found this helpful
Report abuse
See all reviews
Back to top
Get to Know Us
Make Money with Us
Let Us Help You
And don't forget:
© 1996-2021, Amazon.com, Inc. or its affiliates