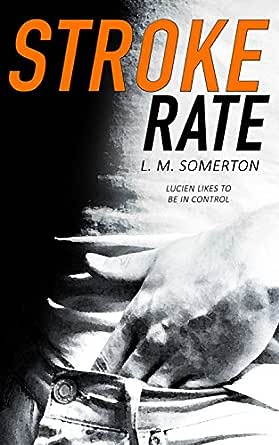 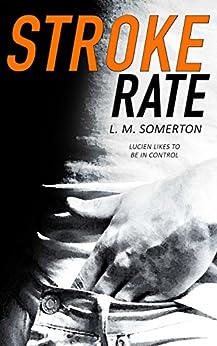 Lucien Thorne likes to be in control, but the boy he wants to own may take some convincing.

Gorgeous but shy, Benedict Astor does his best to keep a low profile at the rowing club where he works. However, unbeknown to Benedict, he has attracted the attention of Lucien Thorne, rowing aristocracy, an Olympic medalist and a lord.

Whilst looking for a new rowing partner, Lucien believes he has found what he needs in Ben. He pushes him to his limits on the water and it becomes clear that rowing with the pretty young man is not his only interest. Ben is attracted to Lucien but confused about his feelings. Lucien is demanding, arrogant and dominant—which Benedict responds to even though he feels he should resist.

Fighting emotions he doesn’t understand, Ben has to contend with the bullying rowing club president and a humiliating auction of promises.

Lucien recognizes Ben’s hidden submissive streak and makes his own need for control very clear. He bids for Ben’s time, then forces Ben to admit to his own desire to test the ground between them.

When the deeds to the boat club are gambled away, Lucien and Ben must work together to save it. Will their growing love survive the pressure, Ben’s uncertainty and Lucien’s desire to own him completely?

Lucinda lives in a small village in the English countryside, surrounded by rolling hills, cows and sheep. She started writing to fill time between jobs and is now firmly and unashamedly addicted.

Veronica
TOP 500 REVIEWER
4.0 out of 5 stars Sexy sports romance
28 February 2016
Format: Kindle Edition
I received a free copy of this book to read and review for Wicked Reads.

Ben, a university student, works at the local rowing club. When Lord Lucien Thorne, an Olympic rower, approaches him and asks to row with him it quickly becomes obvious that Lucien is interested in more than a rowing partner. I loved the dom/sub relationship here. Ben is inexperienced but open and willing and it is clear that Lucien will take care of him while still pushing his boundaries.

Between the rowing scenes on the river and the time spent at the Castle this story has lovely scenery and the author's writing gave this story a calmness I really liked. When it was over I was disappointed because I wanted more time with Lucien and Ben.

It was great to see a sports romance based around rowing - a sport I only really pay attention to during the Olympics. I had no idea rowing could be so sexy. Bring on the games in Rio.

nowyat
5.0 out of 5 stars Different and original take on a sub/dom story.
8 August 2013 - Published on Amazon.com
Format: Kindle EditionVerified Purchase
This story is so well written that I kept going back to re-read the beginning chapters a couple times before I could move on to finish the entire book. The evocative ambience of Ben's simple life really sets the opening stage of the book. He is a hard-working college student who lives in the tiny flat above the rowing club and pays for his lodgings and club membership by waking before dawn to open the boat house and get everything set up for the day, and to clean the building and store away the boats at night. He goes out and practices rowing in the cold foggy mornings before his day of classes. As the book progresses he meets the dark and dangerous Lucien Thorne, an English lord who is a former Olympic rower and owner of a great manor house. Lucien chooses Ben to replace his retired rowing partner, but his interest is in more than sports. Lucien is a domineering man who likes control, but also a caring and protective boyfriend. I've read dozens of 'D/s club' books lately, I don't know if authors are writing more of them or if I've been reading more, but this is a completely original take on that sort of relationship. Those books were occasionally rather derivative and repetitive, but this takes the relationship out into the real world which made it fascinating. Another good book by this author is "Mountain Rescue". At first glance, I thought, "Sports, augh..." but the rowing scenes are really fascinating and make you want to get out on a river yourself. ;)

"""Season of mists and mellow fruitfullness, my arse." Ben shivered and muttered to himself as he unlocked the boathouse door the next morning and peered through fog that would not have been out of place in "The Hound Of The Baskervilles". The sun was not yet up, and he could feel the heavy dew soaking through his canvas shoes as he pulled upon the large doors that granted access to the boats.""
Read more
3 people found this helpful

L.S.F
5.0 out of 5 stars Loved it!
25 March 2013 - Published on Amazon.com
Format: Kindle EditionVerified Purchase
This is pretty light stuff, but totally fun and enjoyable, with very hot, and I mean HOT, sex. The BDSM elements were very user-friendly, not light so much as good-natured. I really like Somerton's submissive characters: Benedict is just plain sweet without being annoying, wussy, or burdened with some miserable back-story. It's easy to see how he can't resist Lucien, who comes at him with all the subtlety of speeding freight train. But it's also not too great a stretch to imagine gorgeous, witty, aristocratic Lucien falling for a wall-flower like Benedict. Usually in these books, the focus is on the sub trusting the dom, but here it's almost the reverse: Ben is trustworthy, which allows Lucien to truly be himself. And Lucien as himself is a fantastic dom: fiendish but with a great sense of humor.

The results are a fun love story without a lot of gratuitous angst or ridiculous misunderstandings. One I'll definitely reread on a bad day when I need cheering up.
Read more
2 people found this helpful

Kindle Customer
5.0 out of 5 stars Bingo, New fan.
20 October 2017 - Published on Amazon.com
Verified Purchase
This one dragged me under from the get go and I cursed the need for sleep.
There is no way I would not want to read the rest of thier lives.
Read more

Aussie.Abroad
4.0 out of 5 stars Now this was a good short story
30 June 2013 - Published on Amazon.com
Format: Kindle EditionVerified Purchase
Excellent set up and excellent development of characters. I really liked the setting and it was an honestly believable story. No angst which I adore
Read more
Go to Amazon.com to see all 15 reviews 3.8 out of 5 stars
Get FREE delivery with Amazon Prime
Prime members enjoy FREE Delivery and exclusive access to movies, TV shows, music, Kindle e-books, Twitch Prime, and more.
> Get Started
Back to top
Get to Know Us
Make Money with Us
Let Us Help You
And don't forget:
© 1996-2020, Amazon.com, Inc. or its affiliates