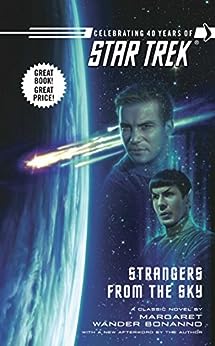 Margaret Wander Bonanno is the New York Times bestselling author of Star Trek the Lost Era: Catalyst of Sorrows, Star Trek: Dwellers in the Crucible, and Star Trek: Strangers from the Sky, as well as two science fiction trilogies, The Others and the Preternatural. --This text refers to an alternate kindle_edition edition.

4.5 out of 5 stars
4.5 out of 5
169 global ratings
How are ratings calculated?
To calculate the overall star rating and percentage breakdown by star, we don’t use a simple average. Instead, our system considers things like how recent a review is and if the reviewer bought the item on Amazon. It also analyses reviews to verify trustworthiness.

Kindle Customer
5.0 out of 5 stars Vulcan go back in time
Reviewed in the United Kingdom on 20 March 2017
Verified Purchase
I really like James and Spock's developing friendship. It is fascinating seeing how they slowly build on it. To see the new aliens and the humans fine ship begin to trust each other, especially Sorahl and Yoshi begin to accept each other, followed by the others, makes you wonder what would happen if aliens came to Earth, as we hear about Americans in real life, supposedly hiding and possibly killing aliens in the past.
Read more
One person found this helpful
Report abuse

John Walker
2.0 out of 5 stars Some good ideas, but not great
Reviewed in the United Kingdom on 9 August 2018
Verified Purchase
This didn't really work for me at all. It has some good ideas, but I didn't love how they were realised.

Ironically, I thought that Spock's storyline in the book was the most impactful and emotional.
Read more
Report abuse

jen at rubery
5.0 out of 5 stars Trekkie delight
Reviewed in the United Kingdom on 25 January 2015
Verified Purchase
As a confirmed Trekkie I have always thought this one of the best spin-off novels from the Trek franchise, since I read it years ago in paperback - lovely to have it in Kindle.
Read more
One person found this helpful
Report abuse

Andrew G. Levitt
4.0 out of 5 stars A pleasure to read again
Reviewed in the United Kingdom on 28 November 2012
Verified Purchase
Read this in Pb about 15 yrs ago. Still enjoy it, very enjoyable and just as good as any of the plethora of Trek that has followed it.
Read more
Report abuse

Duane Brodnick
4.0 out of 5 stars WHAT WAS I THINKING THE FIRST TIME?
Reviewed in the United States on 16 April 2020
Verified Purchase
I remember trying to read this book years ago before the days of the Kindle. I found the book back then boring because of the time travel. This time around I was totally absorbed. First, the book was written before the series became canon. It took place just after Kirk took over command of the ENTERPRISE and before the second series pilot, WHERE NO MAN HAS GONE BEFORE. We also saw the characters as they were still in development. Kirk was still in his 'freshman' mode, still learning about his crew and the operation of the ship. Plus, he was treading on egg shells around Spock. He had never been around Vulcans before. He didn't know how to handle him. There was also a lot of backstories about the characters. Gary Mitchell, before becoming a 'super god', comes across as a easy going guy, who seldom let a situation get on his last nerve. He handled everything with a sense of humor. He was loyal to Kirk and would definitely die for the Captain. Doctor Dehner showed she was more than a 'walking freezer unit.' She was professional but showed she had a sense of humor. Dr. McCoy, who did not appear in WNMHGB, was already assigned to the ship but was on leave, so Dr. Piper covered for him. Uhura, Sulu and Rand either appeared briefly or was only mentioned. The surprise for me was Lee Kelso. He was more than in the second pilot where he was killed. He came across as a likeable character, and a 23rd Century hacker! He was like a kid in a candy store, being able to hack any computer, no matter what century it was from. I found himself disappointed that Kelso never become a regular character. He would had been an interesting addition to the series. Of course, it the series went in a different direction, what would they do with Sulu, and later, Chekhov? It was also interesting to see what Earth was alike after the Third World War. All was not totally 'united' on the planet, with conflicts erupting almost every day, almost everywhere. In conclusion, I enjoyed this book because it took the characters out of their comfort mode. I enjoy stories where you learn more about the 'background' characters. There are books about McCoy, Sulu, Chekhov, Uhura and Scotty. Will there be a background book about Yeoman Rand? Or even Captain Christopher Pike? I highly recommend this book.
Read more
13 people found this helpful
Report abuse
See all reviews
Back to top
Get to Know Us
Make Money with Us
Let Us Help You
And don't forget:
© 1996-2021, Amazon.com, Inc. or its affiliates