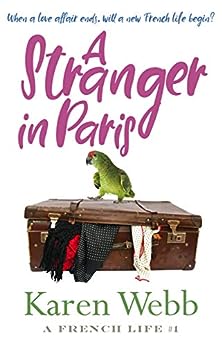 A Stranger in Paris (A French Life Book 1) Kindle Edition

by Karen Webb (Author) Format: Kindle Edition
See all formats and editions
Sorry, there was a problem loading this page. Try again.
‘A Stranger in Paris is everything you want from a memoir: it’s honest, brave, witty, very funny and ultimately rather wise.’ – Amanda Hodgkinson, author of 22 Britannia Road

Aberystwyth University, 1986 – and another year of torrential rain. Bad hair days and a rugby-fanatic fiancé are part of her drab existence so who can blame Karen for falling into the arms of a handsome Parisian?

Hastening across The Channel with stars in her eyes, she speeds to the city of light only to discover that her lover is nowhere to be found. Nor what he seemed.

Life takes a turn for the better when her old school-friend Jessica makes a dramatic entrance, encouraging Karen on a downward spiral of adventure - including a brush with the Parisian underworld which places both girls in peril.

Karen’s childhood is a constant anguish reminding her that when things go wrong, not everyone has a home to return to, as the dark shadows of the past merge with her troubled French life.

Where to go, when there’s no going home?

Based on a true story, A Stranger in Paris is the first of a three-part series. This honest memoir recounts with humour and poignancy the search for love and family.
Read more
Previous page
Next page

Karen graduated from Aberystwyth University with a Degree in English Literature. She then moved to Paris, where she worked for 16 years as an English language teacher for business professionals before settling in rural South West France. With few employment opportunities other than stuffing geese or picking melons, she qualified as a licensed real estate agent.

Karen then attended Lancaster University where she graduated with a Masters in Creative Writing in 2015, after which she set up a series of Creative Writing retreats, “A Chapter Away”, inviting world famous authors, literary agents and publishers to teach aspiring novelists. Inspired by the comments of tutors on the memoir writing course, she began “A Stranger in Paris.”

Passionate about theatre, and script-writing, Karen has also written plays, several short stories and a novel – all of which are lurking in the bottom drawer. “A Stranger in Paris” is her first published work, and is the first novel of the trilogy La Vie Française.

Karen now lives in Gascony with her husband and son, and has a grown-up daughter who works in London. Much of her writing is inspired by the North West of England where she grew up, and France which became her country of adoption.

leekmuncher
4.0 out of 5 stars Through naïve eyes, la vie française
Reviewed in the United Kingdom on 27 June 2019
Verified Purchase
What could have been a dull memoir of any British au-pair arriving in France is given a sincere emotional charge by an exceptional heroine. The naïvete of the gauche yet observant nanny makes the reader both cringe and smile. The gossamer hopes of her romances set against the expectations of the household set up moments of delight and sadness.

This is a hiccupy, awkward and yet charming insight into the British abroad. There are times when you want to give almost every character a shake. The nuances of cultural difference are mountains not molehills to this young woman. Overconfident, underprepared but always optimistic, our heroine stumbles from situation to situation, slipping from the dangerous to the futile with blithe belief.

The characterisation is uneven but when it works, the personae leap of the page. Most importantly, this book conveys the pumice stone of cultural interaction.

Those were the days. It should be compulsory reading for school-leavers across the UK. The gradual acclimatisation is a joy.
Travelling changes people, almost always for the better.

You’ll enjoy this if you liked: The Pursuit of Love by Nancy Mitford or Brooklyn by Colm Toíbín

Ideal accompaniments: Cheap red wine, Chinese takeaway and this version of I Love Paris by Zaz.

Alan
5.0 out of 5 stars Lost in Paris
Reviewed in the United Kingdom on 9 January 2020
Verified Purchase
Karen places you inside Paris as a lonely young naïve English au pair with just a smattering of school French, who is expected to immediately run a whole upstairs - downstairs like household. After glimpsing the double life/secrets of her Parisian elite family and their friends and ironing one shirt too many, she runs away with an English friend to get a proper job in the heart of the city. It becomes a battle to survive, foraging francless with little job prospects you wander if they will throw in towel and return to blighty. They are both at emotional breakpoints but Karen although waif like, is resilient, and you sense she is getting street sharpened every day. The authors descriptive powers are 3D like and none more so than making the mundane, like getting a coffee machine to work come to life, and smell the coffee. The book opens up on French life in the 90s through the eyes of student in search of romance and adventure, she finds it but so much more in this soul wrenching memoir. I find it hard to believe that Karen is a first author and urge her publisher to get the sequel out quickly and let's experience her life this time in rural SW France.
Read more
2 people found this helpful
Report abuse

R. S. Mathews
5.0 out of 5 stars A life well, if unusually, lived. Glorious fun.
Reviewed in the United Kingdom on 15 March 2019
Verified Purchase
Spoiler alert; I know the author. She has spent the last few years delighting her friends with stories of her eventful life. Eventually, we persuaded her to write them down. This is the first volume of what is to be a trilogy. Karen does things other people don't do and, if not, certainly does them very differently. Most of us would not have got ourselves into the situations she has got herself into. Which is why this is such a delightful read. You will laugh and maybe sometimes cry, but you will come away with the warm feeling of having shared an unusual life. She writes these stories as well as she tells them. This is real life, not fiction. Nevertheless, it is extraordinary and very entertaining.
Read more
One person found this helpful
Report abuse

lisa kennard
5.0 out of 5 stars Intelligent , funny , honest , learned and empathetic
Reviewed in the United Kingdom on 25 April 2020
Verified Purchase
This book is an absolute gem .
From line two until the end I was completely absorbed and found myself able to visualise immediately the whole setting of each chapter . In my opinion this can only be achieved by an author whose manner of writing manages to humour , shock ,educate,
humble and hold ones mind completely in every moment we find ourselves in . The eloquence and honesty of this author within her story keeps one engaged and eager to explore further with her . I found myself at times to be smiling or crying whilst reading . One can relate very much to the content of this book just simply by the telling of the story . You feel you have a connection with the author as the story unfolds . I am eager to read books two and three now ........ roll on ! I am in no doubt at all that they will not dissapoint the reader . I actually feel that this should be a film and find myself wondering whom I should cast as lead lady . It would be wrong in my opinion to say it would be a humorous comedy film ......... in fact it feels to me more like the emotional way " The Full Monty " affected me . It is an intensely honest and humbling look at just quite simply a life . Karen Webb injected wonderful prose into a book which I think is brave to write . Please carry on writing Karen as you have so much to offer us readers . Thank you . Xx
Read more
2 people found this helpful
Report abuse

Tony Williams
5.0 out of 5 stars Enjoyable read
Reviewed in the United Kingdom on 8 January 2020
Verified Purchase
Whatever the title and cover may suggest this is not a Mills and Boon romance.

Rather it is the biography (but only a couple of years) of a none celebrity woman's life.Her early 20s.

Its well written and to my mind accurate reflection of life and sex at university.Where else will someone pay you a grant to stay in bed all day with a member of the opposite sex?

Thereafter its her search for love in France. Warts are visible and its no sugar coated pill..

Enjoyable read.It's a shame it has not been picked up with some reviews on the cover to champion its merits
Read more
2 people found this helpful
Report abuse
See all reviews
Back to top
Get to Know Us
Make Money with Us
Let Us Help You
And don't forget:
© 1996-2021, Amazon.com, Inc. or its affiliates