The Strange Death of Fiona Griffiths and over 1.5 million other books are available for Amazon Kindle . Learn more
Share <Embed> 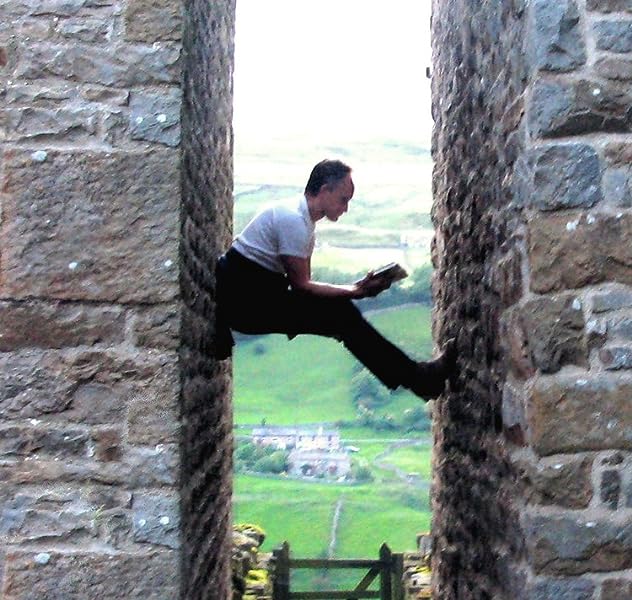 Page 1 of 1 Start overPage 1 of 1
Previous page
Next page
Start reading The Strange Death of Fiona Griffiths on your Kindle in under a minute.

I'm Harry Bingham. I write crime novels and love it. When I'm not doing that, I run the Writers' Workshop, a British literary consultancy. I live in Oxfordshire, England, but I spent a lot of my childhood in Wales, where my crime novels are set. Things I love apart from writing: wild swimming, rock-climbing, walking, & dogs. I'm married, have four kids, and I love my life.

4.7 out of 5 stars
4.7 out of 5
333 global ratings
How are ratings calculated?
To calculate the overall star rating and percentage breakdown by star, we don’t use a simple average. Instead, our system considers things like how recent a review is and if the reviewer bought the item on Amazon. It also analyses reviews to verify trustworthiness.

Bob Howe
4.0 out of 5 stars Good read but reminded me of the Lady with the Tatoo
Reviewed in Australia on 25 November 2015
Verified Purchase
Enjoyed more of Fiona in this book but it did become a little too fanciful in her exploits But.... Very well written and the main players are well drawn
Read more
Helpful
Report abuse
See all reviews

Bizgen
5.0 out of 5 stars The best crime novel I've read for years, well plotted, taut and edge-of-seat exciting
Reviewed in the United Kingdom on 12 January 2019
Verified Purchase
This is probably the best crime thriller I've read for some years. Extremely well plotted, everything hangs together. The detective has a similar problem to the heroine of that wonderful Swedish series, The Bridge. I carried on until I finished it at 2.00 am - and then, in case I had missed anything, went back to re read the last six chapters!

I read them in sequence so that I get the background right. Each one has improved. Can't see how the author, Harry Bingham, will be able to keep this pace up, I hope he does. It's very visual, I can see it as a film, but in a way, I hope they don't make one, because film makers usually ruin things. I very rarely give 5 stars, as you'll know if you read my other reviews.

A really good read and I can't recommend it highly enough.

Annie
5.0 out of 5 stars Wow!
Reviewed in the United Kingdom on 22 August 2018
Verified Purchase
What a page turning success of a book!
I enjoyed the first in this series, thought the second was better but this one has had me completely gripped. That sleep deprived kind of gripped you get when you discover a great book. Harry Bingham's writing style is so easy to read and the pace of this book never lets up - I've spent the last two hours in a state of heightened anxiety. Brilliant! So good, I can even forgive the slight over-use of Welsh christian names.
Fiona Griffiths is a great, gutsy character, developed carefully throughout the series but the addition of Fiona Grey and Jessica was deftly handled and believable. The baddie was satisfyingly bad.
The best read I've had in a while. Great job, Mr B!
Read more
Report abuse

Tales of a Librarian
4.0 out of 5 stars Our favourite, off-kilter Welsh DCI returns
Reviewed in the United Kingdom on 4 April 2015
Verified Purchase
This is easily the best in a great series with strange, off-kilter heroine, Fiona Griffiths. One time sufferer of Cotard's syndrome, Fiona has a special connection to people who have died, especially by untimely and violent means. Driven, fiercely intelligent and obsessive, the smallest smudge of a clue sends Fiona off in search of perpetrators. Yet for all that she is honest, likeable, irreverent and considerate. One of the greatest touches about Fiona's character, aside from her strong, compelling voice, is the way she is so insightful when it comes to sizing up people, working out what they think and feel, yet really has trouble working out what she feels herself.
This was a bit slower starting than 'Talking to the Dead' or 'Love Story with Murders', but worth the build up pacing wise. As Fiona goes undercover, we readers are likewise enveloped and smothered in this dangerous, underground world, indentity on top of identity unil we're wandering through webs of mystification. All in all a great read, well balanced, cunningly plotted, witty and with an unlikely girl heroine which makes this a crime novel unlike any other.
My only real criticism, and I'm sure Harry Bingham had a good reason for this, was an event that occurred almost at the end of the book. I was really quite put out as I wanted that minor matter to work out differently. Though not so put out that I won't be reading book four as soon as it's available. If you haven't read any of this series, line them up and take it from the top. You're in for a treat.
Read more
3 people found this helpful
Report abuse

Loretta Milan
5.0 out of 5 stars The easiest five stars I've ever awarded a book
Reviewed in the United Kingdom on 2 March 2015
Verified Purchase
Fiona Griffiths is by far the most original fictional detective I’ve come across. Very often, after reading crime, I’ve forgotten the lead characters’ names within a few days. Not this time! Fiona is far from a cardboard-cutout detective with alcohol issues (although she does enjoy the odd joint when undercover) because she is brilliantly complex. So, don’t expect Wales’ answer to Rebus. She’s deeply troubled yet warm and witty, a maverick without alienating superiors, fragile but courageous. She represents true characterisation mastery.

Fiona, who has only cried once in her adult life, is portrayed with great physiological depth without being dark. Even though Fiona battles with her identity and borderline psychosis, I never found her depressing. She is a strong woman. A survivor. She’s perfect for working undercover as she’s used to managing multiple forms of self and her demons give her drive. Men are attracted to her but not because she flutters her eyelashes. They’re intrigued by her. What I found particularly clever is the way that, at times, she shifts in and out of referring to herself in the third person, showing confusion rather than describing the fog. In fact, as much as this is a story of the search for a criminal mastermind, it’s a story of Fiona’s search for her identity.

As the book is written in the first person, I ask Harry what it’s like being in Fiona’s head. He tells me he enjoys writing from a female perspective although, as a result of his research, he’s now being ‘stalked’ online by adverts for damson dresses and breast enlargements. However, he tells me his biggest characterisation challenge isn’t gender but rather portraying the instability of Fiona’s mind. She is, after all, a woman who takes comfort in thinking about corpses, turning scenes that could be boring – like clothes shopping – into vibrant ones. He says he wants her to be dark and odd yet funny and interesting so readers want to stick by her and root for her. One of the things that is fun about Fiona is that she won’t simply tolerate rules and moan about them, she’ll break them and won’t care. There were times she made me cheer and think “you go girl!”

Despite Fiona’s vulnerabilities, the story by no means proceeds tentatively. There is mental and physical brutality. The story takes longer to build than most police procedurals because of the time taken to establish the characters but, as a result, when action ramps up, the experience is potent, with the intensity of a psychological thriller. It made me feel breathless with worry, concern and eventually fear for Fiona.

The plot is relatively simple in order to give space for characterisation and, although the book has a literary feel, the pace is saved largely because remarkable detail is built up with so few words. Harry, clearly not one to rely on a casual flick through a thesaurus, has a knack for picking precise words or choosing unusual objects that create a vivid image, such as a saucepan used to hammer in a nail and a hockey stick with which Fiona asks to be hit on purpose...

blossom
5.0 out of 5 stars A Welsh cracker indeed!
Reviewed in the United Kingdom on 24 September 2017
Verified Purchase
I will not write about the aspects everyone else who rates these books so highly have already done. What I find so very interesting is the way a man can write of a young woman so well. Not that FG is a normal young woman, so add her Cotard's Syndrome, plus the puzzlement of her background & we have a really complex character which HB seemingly writes of without any problems. What I particularly like about this book is the interaction between FG & a mostly nasty man. Stockhome Syndrome was not mentioned though, so whether she felt more for him than would be usual because of her medical background I wonder. I really enjoyed this aspect of the story & even felt an attraction for him myself. That is how well he was written. Before these books were written, I lived in The Mumbles, which is mentioned in Book 2, travelled to see friends in Cardiff frequently, even had a woman friend whose father is an almost model for Tom Griffiths!!
Read more
Report abuse
See all reviews
Get FREE delivery with Amazon Prime
Prime members enjoy FREE Delivery and exclusive access to movies, TV shows, music, Kindle e-books, Twitch Prime, and more.
> Get Started
Back to top
Get to Know Us
Make Money with Us
Let Us Help You
And don't forget:
© 1996-2020, Amazon.com, Inc. or its affiliates