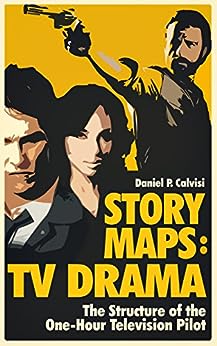 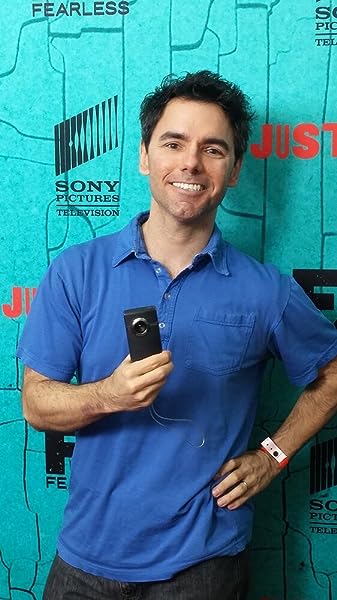 by Daniel Calvisi (Author) Format: Kindle Edition
See all formats and editions
Sorry, there was a problem loading this page. Try again.
Daniel Calvisi brings his Story Maps screenwriting method to television as he breaks down the structure of the TV drama pilot, citing case studies from the most popular, ground-breaking series of recent years, including THE WALKING DEAD, GAME OF THRONES, HOUSE OF CARDS, TRUE DETECTIVE, BREAKING BAD, MR. ROBOT, SCANDAL and MAD MEN.

Story Maps: TV Drama offers the first beat sheet for television screenwriters ("Save the Cat" for TV). This is the structural template that aspiring and professional TV writers have been looking for. A clear, practical, step-by-step method to write a pilot that adheres to Hollywood standards.

How to write a TV pilot has never been easier. Writing a pilot begins here.

This book first introduces you to the key formats, genres and terminology of modern TV shows, then details the major signpost beats of a teleplay and the crucial characteristics that must be present in each act, using specific examples from our new "Golden Age of Television."

Story Maps: TV Drama has been endorsed by many INDUSTRY PROFESSIONALS in Hollywood, including:

"Story Maps: TV Drama is a handy, practical guide that walks writers through the process of creating a compelling TV drama. Using examples from some of the most respected shows on television, writers will learn to master the form from outline to Fade Out. I wish I'd had this book when I was first starting out!"
— Hilary Weisman Graham, Writer, Bones (Fox), Orange is the New Black (Netflix)

“I plan to use Calvisi's process on our upcoming show in development at Starz."
— Kirkland Morris, Producer, Tomorrow, Today (STARZ)

“This book blows all others out of the water! There’s no other TV writing book that offers this level of detail when it comes to how to structure a one-hour television drama pilot.”
— Larry Reitzer, Writer, Melissa & Joey, Just Shoot Me!, Ugly Betty

“I’ve worked in film and television for years and I can say for certain that there is nothing else like Calvisi’s book anywhere out there. His system is truly unique and breaks TV pilot structure down step-by-step, using very specific examples from some of the great pilots of recent years.”
— Fritz Manger, Producer, A Deadly Adoption with Will Ferrell and Kristen Wiig

"I've turned to Calvisi for notes on several scripts in the past, and this new book is well-timed as the industry makes a huge shift toward television. This is a fantastic primer in developing a rock-solid one-hour TV pilot. I recommend this book to writers as the foundation in creating excellent story structure.”
— Richard J. Bosner, Producer, Fruitvale Station, Other People, The Wannabe

"Calvisi has a firm grasp on the nature of the one-hour drama for television. I have little doubt that by following his guidelines and doing your homework, he can lead you to create a great pilot of your own!"
— Jenny Frankfurt, Literary Manager, High Street Management

"Daniel Calvisi does an expert job of breaking down the structure of television pilots in a way that's not only easy to understand, but can be easily applied to one's own work. He uses references that are current and offers clear, succinct advice. If you're thinking of writing a TV pilot, read this book first!"
— Christine Conradt, Writer/Producer/Director of 50 Lifetime network movies, The Bride He Bought Online, Stalked at 17
Read more
Previous page
Next page

Daniel P. Calvisi is a story consultant, screenwriter and the author of Story Maps: How to Write a GREAT Screenplay, Story Maps: TV Drama, Story Maps: 12 Great Screenplays, and Story Maps: The Films of Christopher Nolan. He is a former Story Analyst for major studios like Twentieth Century Fox and Miramax Films. He teaches webinars on writing for film and television with The Writers Store and speaks at writing conferences. He holds a degree in Film and Television from the Tisch School of the Arts at New York University. He lives in Los Angeles. To learn more about Story Maps and how you can work with Dan, visit ActFourScreenplays.com. --This text refers to the paperback edition.

4.7 out of 5 stars
4.7 out of 5
318 global ratings
How are ratings calculated?
To calculate the overall star rating and percentage breakdown by star, we don’t use a simple average. Instead, our system considers things like how recent a review is and if the reviewer bought the item on Amazon. It also analyses reviews to verify trustworthiness.

G. Rafferty
5.0 out of 5 stars Terrific Book! -- Highly Recommended!!
Reviewed in Australia on 30 September 2020
Verified Purchase
So glad I bought this book. It has helped a great deal. Just What I Needed. Thank you!!
Read more
Helpful
Report abuse
See all reviews

JS
5.0 out of 5 stars A fantastic and extremely useful guide for anyone with an idea for a 1 hour TV show
Reviewed in the United Kingdom on 28 June 2019
Verified Purchase
The almost mechanical attention given by the author about how to write a modern TV pilot, using excellent examples such as Breaking Bad, Mad Men, Scandal and many others makes it easy to understand, even if you've never seen the shows. Seeing these shows' pilots broken down to their core structural components and providing the right tools, such as guides for page length and act length, as well as a blank story map at the end for you to use, makes understanding TV structure a breeze. I would strongly recommend this for people who've a good knowledge of scriptwriting and are considering a writing career in TV.
Read more
One person found this helpful
Report abuse

Rob
5.0 out of 5 stars Brilliant book for any aspiring screen writer
Reviewed in the United Kingdom on 2 September 2021
Verified Purchase
This is a brilliant book. It demystifies the construction of a TV pilot and the case studies are excellent homework when you go and watch the episodes. As a writer, who does not have formal training, I find this book to be an excellent addition to my arsenal. It shows the complexities of a well made TV pilot, however, it does so in an easy to understand way with no jargon. It's a book that should be read multiple times and it is essential to sit down and watch the case studies, from a purely technical stand point, so that you can see the techniques described play out. Highly recommended.
Read more
Report abuse

TeeTee
5.0 out of 5 stars To the point and great examples
Reviewed in the United Kingdom on 18 March 2021
Verified Purchase
I loved this book - I read it very quickly and it's helping me to outline my TV pilot - it's not too long but has loads of valuable info - the examples used help you understand what he's talking about. I'm hoping that reading through his breakdowns of classics such as Breaking Bad, Walking Dead, Game ofThrones and more have helped me internalise
some of the essentials. Now I just have to apply the theory to my own idea. Also, if you email him he sends you a Story Map worksheet straightaway - thanks, Dan - really appreciate it!

Amazon Customer
5.0 out of 5 stars The shortcut to understanding contemporary TV drama structure
Reviewed in the United Kingdom on 29 January 2019
Verified Purchase
Great book Daniel. I have bought 5 screenwriting books this month; many by very well known writers; yours is actually the best in my opinion for simply laying out the story map patterns of some of the greatest shows of modern TV. It's also packed full of helpful insights and time-savers that allow me to pour my energy into creativity rather than trying to wrestle through literature to find the structural template that these shows have in common.
Read more
Report abuse

Jimbo
5.0 out of 5 stars Everything you need
Reviewed in the United Kingdom on 4 January 2021
Verified Purchase
I knew how to structure and write screenplays but had never attempted to write something for a TV series before. This book explained everything with lots of examples.
Read more
Report abuse
See all reviews
Back to top
Get to Know Us
Make Money with Us
Let Us Help You
And don't forget:
© 1996-2022, Amazon.com, Inc. or its affiliates