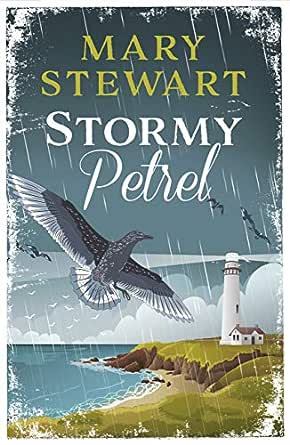 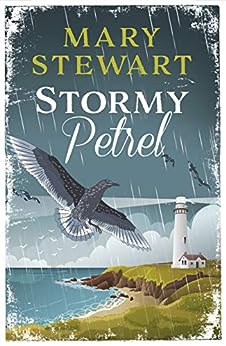 Stormy Petrel: The gripping classic that will keep you on the edge of your seat Kindle Edition

e is taking a break from her Cambridge teaching post in an isolated cottage on the island of Moila. One evening, she is shocked to discover an attractive stranger, Ewen Mackay, in her kitchen, who claims to have grown up in the cottage. She is tempted to believe him, when another man seeks shelter from the storm. John Parsons also rouses Rose's skepticism...and more tender feelings as well. And as the truth about the two men unfolds, the stormy petrels, fragile elusive birds who fly close to the waves, come to symbolize Rose's confusion and the mystery of her future.... --This text refers to an out of print or unavailable edition of this title.

The stylish, educated novels of Mary Stewart . . . arguably inspired the deluge of bestselling romantic fiction that has flooded the market in recent decades., Guardian

Mary Stewart sprinkled intelligence around like stardust . . . She built the bridge between classic literature and modern popular fiction. She did it first and she did it best -- Melanie Reid, Herald

A writer of considerable skill . . . [with an] intuitive feel for the past and its re-creation in vivid, poetic detail, Telegraph

A wonderful wordsmith . . . Stewart was among the first authors to seamlessly integrate a mystery and a romance thus allowing the two to come alive and complement each other., Scotsman

Lady Stewart's writing is illuminated by her evident affection for the Western Scottish landscape . . . a rattling good yarn, Sunday Telegraph

She set the bench mark for pace, suspense and romance - with a great dollop of escapism as the icing, Elizabeth Buchan --This text refers to the paperback edition.

Lady Stewart's writing is illuminated by her evident affection for the Western Scottish landscape . . . a rattling good yarn - Sunday TelegraphA sunset touch . . . a gentle love story . . . a happy return - The TimesA beautifully written, atmospheric story - Birmingham PostShe set the bench mark for pace, suspense and romance - with a great dollop of escapism as the icing - Elizabeth BuchanA comfortable chair and a Mary Stewart: total heaven. I'd rather read her than most other authors. - Harriet Evans --This text refers to the paperback edition.

Mary Stewart was one of the 20th century's bestselling and best-loved novelists. She was born in Sunderland, County Durham in 1916, but lived for most of her life in Scotland, a source of much inspiration for her writing. Her first novel, Madam, Will You Talk? was published in 1955 and marked the beginning of a long and acclaimed writing career. In 1971 she was awarded the International PEN Association's Frederick Niven Prize for The Crystal Cave, and in 1974 the Scottish Arts Council Award for one of her children's books, Ludo and the Star Horse. She was married to the Scottish geologist Frederick Stewart, and died in 2014. --This text refers to the paperback edition.

Mary Stewart is one of our most successful novelists. Her first novel, MADAM WILL YOU TALK, was published in 1955. It was an immediate success and marked the beginning of a long and acclaimed writing career. All her novels have been bestsellers on both sides of the Atlantic. She was made a Doctor of Literature by Durham University in 2009. --This text refers to the paperback edition.

A classic tale of love, intrigue, adventure and the natural world, set on a beautiful isolated Hebridean island, by beloved novelist Mary Stewart. --This text refers to the paperback edition.
Read more

4.2 out of 5 stars
4.2 out of 5
261 global ratings
How are ratings calculated?
To calculate the overall star rating and percentage breakdown by star, we don’t use a simple average. Instead, our system considers things like how recent a review is and if the reviewer bought the item on Amazon. It also analyses reviews to verify trustworthiness.

Gianetta
4.0 out of 5 stars a favourite
Reviewed in Australia on 17 October 2015
Verified Purchase
An all time favourite of mine. No one describes and makes settings seem as real as Mary Stewart. I want to go to the places she describes.
Read more
One person found this helpful
Helpful
Comment Report abuse
See all reviews

Elegsabiff
3.0 out of 5 stars Far from her best but still a Mary Stewart
Reviewed in the United Kingdom on 6 March 2020
Verified Purchase
I absolutely love Mary Stewart at her best and am giving this 3 stars only so that another fan, coming across it as I did, won't expect it to be one of her best. It's written with all her usual ability to engage and to share the scene and she's a lovely, lovely writer so if you don't expect too much you will enjoy. I did.
Read more
One person found this helpful
Report abuse

Jill Payne
5.0 out of 5 stars Stormy Petrel by Mary Stewart
Reviewed in the United Kingdom on 17 September 2018
Verified Purchase
I love the books written by Mary Stewart. I have read most of her books and find them very interesting. She is a very descriptive writer so you feel as if you are there with her characters. I love to read and re-read Mary Stewart books and find it hard to put one of her books down once started.
Read more
2 people found this helpful
Report abuse

northerngirl_12
1.0 out of 5 stars Nowhere near as good as Thornyhold
Reviewed in the United Kingdom on 17 March 2019
Verified Purchase
Boring - won’t be reading it again. I absolutely loved Thornyhold and have read it a million times so I was hoping for the same with this book. I know her writing is easy and gentle but this did absolutely nothing for me. Disappointing.
Read more
One person found this helpful
Report abuse

Jill
5.0 out of 5 stars An easy read
Reviewed in the United Kingdom on 27 October 2018
Verified Purchase
A wonderful Mary Stewart . You get the feeling you are there in the story. This made my holiday perfect. Whisked away to the Scottish Isles while in the Canaries
Read more
One person found this helpful
Report abuse

Dean
2.0 out of 5 stars Not my favourite of hers
Reviewed in the United Kingdom on 26 May 2019
Verified Purchase
It started off really good but then dipped half way through. It can be very slow at times, and found myself dragging on a bit.
Not her best book by a long shot.
Read more
Report abuse
See all reviews
Get FREE delivery with Amazon Prime
Prime members enjoy FREE Delivery and exclusive access to movies, TV shows, music, Kindle e-books, Twitch Prime, and more.
> Get Started
Back to top
Get to Know Us
Make Money with Us
Let Us Help You
And don't forget:
© 1996-2020, Amazon.com, Inc. or its affiliates