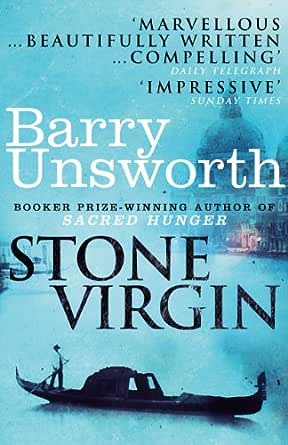 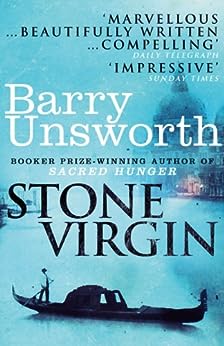 No brief synopsis could suggest the sinuous intricacy of Stone Virgin or the adroitness with which Barry Unsworth manipulates the weighty mysteries of love, death, creation, faith, evil and the lure of history.--Amanda Heller --This text refers to the paperback edition.

3.6 out of 5 stars
3.6 out of 5
21 global ratings
How are ratings calculated?
To calculate the overall star rating and percentage breakdown by star, we don’t use a simple average. Instead, our system considers things like how recent a review is and if the reviewer bought the item on Amazon. It also analyses reviews to verify trustworthiness.

Minijax
4.0 out of 5 stars Over ambitious in its scope
Reviewed in the United Kingdom on 21 December 2017
Verified Purchase
I enjoyed this book, but with reservations. I felt the author was asking us to take on too much. Or maybe I should say that he was too ambitious in taking on so much. Either way, there was so much information that it was difficult to take it all in. The names of all the people, more difficult because they were surnames, rather than first names; the Italian both names and places and little bits of dialogue; and the three different stories, set in different time periods, all contributed to the confusion. The diary of the old man, Ziani was very detailed, and not helped by the change in font in the book. I was tempted to skip some of it. Barry Unsworth gave us a clue right at the end - the power of three. Yes, it is sometimes useful to divide novels up into three parts, or three stories, but I couldn’t always remember what had happened before, when moving on to between the stories.

The plot is that Simon goes to Venice to clean up a corroded statue of the Madonna, and becomes intrigued about her history. The two back stories include the Madonna’s history - telling what happened to the sculptor, his love affair with his beautiful model, how his statue was placed in an ignominious position away from most eyes, and how she once again received acclaim and was moved to a position more suited to her beauty.

There is also the question of Simon’s newly discovered brain condition. Is he seeing things that don’t exist, or is there something supernatural going on? This is left open for the reader to decide. I found the writing a bit too detached, and couldn’t get close enough to the protagonists, certainly not enough to be moved by their respective plights. I think the book would have benefited by the removal of some of the wordiness, perhaps a little less flesh on the bones. But the bones of the story were good. I wanted to find out the answers, despite the - to me - ambiguous ending. 7 out of 10 perhaps and 3 to 4 stars.

Iris Marle
4.0 out of 5 stars Complex, but worth the effort
Reviewed in the United Kingdom on 11 April 2017
Verified Purchase
This was my first Barry Unsworth novel, and although not an easy read, it proved very satisfying. The main plot involves Simon Raikes, an English expert in the restoration of stonework, who devotes months of his life to rescuing a beautiful fifteenth century Madonna, now severely corroded by pollution. There is an element of magical realism, as Simon starts having dizzy turns while in close proximity to the statue, and imagining visions which we learn are part of its history. For example, he 'sees' the face of a beautiful drowned woman whom we learn was the original model. She was murdered by her powerful jealous lover who framed the innocent sculptor. Descendants of this evil man appear through the years and Simon falls in love with Chiara, who is a present day scion of the same family. This plot evolves rather surprisingly into a murder mystery which is very tautly told towards the end of the book.

If you know Venice well you will no doubt love the precise topographical scene setting. I've only been a couple of brief times so only a few places were familiar to me, but the atmosphere and beauty of Venice are well conveyed. There is also a lot of Italian vocabulary but mostly it is fairly obvious what it means, even if like me you are unfamiliar with the language.

My main gripe was Unsworth's presentation of women. He seems rather a misogynist, to put it mildly, and there is barely a likeable woman in the book, other than Simon's elderly Venetian landlady. The title, which has many resonances, would reinforce this impression!

I found this book quite a slow read, as it was complex and required concentration, but I felt it repaid the time I spent, and I intend to seek out more by this author.

Cathy
3.0 out of 5 stars The Stone Virgin
Reviewed in the United Kingdom on 24 January 2013
Verified Purchase
I am a fan of Barry Unsworth and have read several of his novels and I had high expectations of this one. However the book seemed incredibly slow with too many references to Italian works of art and artists. Finally the story got started became interesting and then just died. Disappointing.
Read more
One person found this helpful
Report abuse

Big W
5.0 out of 5 stars One of the best books ever written
Reviewed in the United Kingdom on 15 September 2015
Verified Purchase
One of the best books ever written. I have read my original hard copy twice, and have lost it on loan to someone. So I bought the Kindle edition and have read it again. Great!
Winston
Read more
One person found this helpful
Report abuse
See all reviews
Get FREE delivery with Amazon Prime
Prime members enjoy FREE Delivery and exclusive access to movies, TV shows, music, Kindle e-books, Twitch Prime, and more.
> Get Started
Back to top
Get to Know Us
Make Money with Us
Let Us Help You
And don't forget:
© 1996-2020, Amazon.com, Inc. or its affiliates