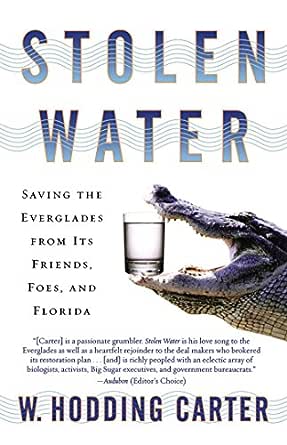 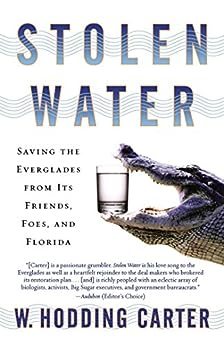 Stolen Water: Saving the Everglades from Its Friends, Foes, and Florida Kindle Edition

"[Carter] is a passionate grumbler. Stolen Water is his love song to the Everglades as well as a heartfelt rejoinder to the deal makers who brokered its restoration plan...[and] is richly peopled with an eclectic array of biologists, activists, Big Sugar executives, and government bureaucrats."
-- Audubon (Editor's Choice)

"Carter [is] a gifted teller of nature tales with a flair for the humorous and off beat....[An] engaging read."
-- Publishers Weekly

"Carter is pissed off and, at the same time, raucously funny -- the perfect combination for a subject so big and miasmal as the Everglades."
-- Hampton Sides, author of Ghost Soldiers and Americana

"Carter writes with breezy, story-telling ease, his voice veering from serious to comic as he blunders through tangles of mangroves on dead-end voyages and sizes up [all] the swampbusting characters."
-- Sun Sentinel (Ft. Lauderdale, FL) --This text refers to an alternate kindle_edition edition.

W. Hodding Carter has written for several national magazines, including Esquire, Smithsonian, Newsweek, and Outside. The author of Westward Whoa, A Viking Voyage, and An Illustrated Viking Voyage, he lives with his family in Rockport, Maine. --This text refers to an alternate kindle_edition edition.

Toni's takes
5.0 out of 5 stars Extremely interesting and educational
Reviewed in the United States on 21 June 2012
Verified Purchase
Sometimes we forget how realy stupid the people who run our state and federal governments are. This book will open your eyes to how the Everglades has been ruined in the name of making things better. I just returned from Miami and from the air you can see how they have "fenced in" the Everglades. Also, the water in Florida has a distinct smell even when showering. I hope "they" start taking some steps to clean things up. Great Book.
Read more
Report abuse
See all reviews
Back to top
Get to Know Us
Make Money with Us
Let Us Help You
And don't forget:
© 1996-2021, Amazon.com, Inc. or its affiliates