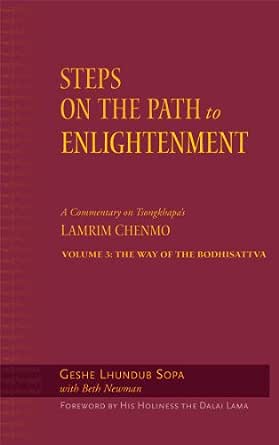 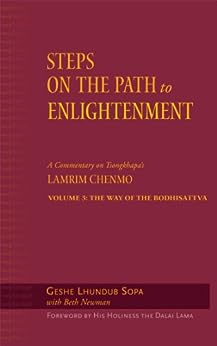 Steps on the Path to Enlightenment: A Commentary on Tsongkhapa's Lamrim Chenmo, Volume 3: The Way of the Bodhisattva Kindle Edition

"Geshe Sopa is one of the great living lamas we have today."--Lama Surya Das, author of Awakening the Buddha Within

"Those of us fortunate to have studied directly with Geshe Sopa well know what an inexhaustible fount of Buddhist learning and wisdom he is. With the publication of Volume II of his comprehensive commentary on Tsong Khapa's classic Lamrim Chemmo, a much wider audience will further benefit from these unending riches. This text presents the mature development of Indian and Tibetan Mahayana Buddhism--the shortcomings of cyclic existence, the three trainings of mind, the importance of renunciation and generating the thought of awakening, etc.--not just by skillfully explicating what the teachings have to say but even more importantly by illustrating how they should be practiced. As Geshela himself says, 'This is not just a theoretical understanding we are talking about, but a realization that leads to direct transformation of your daily life and the behavior of your body, speech, and mind.' In particular, this volume clarifies the complex but crucial relations between the obscuring afflictions (klesha) and the accumulation and fruition of karmic actions--explanations supported, as throughout this rich text, by copious citations from the great classics of Indian and Tibetan Buddhist literature and enlivened by traditional figures whose lives illustrate the wonderous workings of karma. This text will appeal to practitioners and teachers alike for its comprehensive and crystal-clear presentation, in a direct and down-to-earth style, of one of the great encyclopedic texts of Tibetan Buddhism."--William S. Waldron, Associate Professor, Dept. of Religion, Middlebury College

"From my first encounter with Professor Geshe Lhundub Sopa in 1962, I have been impressed with his kindness, patience, and thorough-going scholarship, qualities so strong that they obviously are based on profound realization. When he received his Geshe degree, he graduated first among the first rank, emerging as his year's national hero; he truly embodies what being a well-versed Tibetan scholar requires-the ability to think and react within many different systems. His good-humored, compassionate persistence and forbearance over the course of his long and often difficult life shine throughout the heartfelt, practical explanations in these books."--Professor Jeffrey Hopkins, author of Cultivating Compassion, and translator of The Dalai Lama's How to Practice

"My first real exposure to the great textual tradition of Tibetan Buddhism was through Geshe Sopa's lectures on the Lamrim. It is no overstatement when I say that studying Tsongkhapa through the teachings of one of the greatest living scholars of the tradition indelibly changed my life. And now 'here we are, ' as Geshela says in the opening line to this great work. Here we are indeed, more than a quarter century later, in the presence of this vibrant text, a superbly edited compilation of Geshela's lectures. Read it and you will see that his words still sparkle, and that his wit, insight and erudition come through on every page. But read these volumes slowly, savoring them. Make them last, so that they become for you what they have become for so many of Geshela's students throughout the years: a source of tremendous intellectual excitement, and untold spiritual nourishment."--Jose Ignacio Cabezon, XIVth Dalai Lama Professor of Tibetan Buddhism and Cultural Studies, University of California, Santa Barbara

"Western students will welcome Geshe Sopa's Steps on the Path to Enlightenment, and [also] Yangsi Rinpoche's Practicing the Path. They will serve their readers as indispensable companions to Tsongkhapa's elegant and elaborate Great Exposition on the Stages of the Path, without which the entry into a text of such rigorous thoroughness may seem overwhelming. Students newer to the endeavor will receive a wonderful education from reliable guides. All of us will find our attention focused upon matters of importance."--Buddhadharma: The Practitioners' Quarterly, in a joint review of Wisdom's two recent books on the La --This text refers to an alternate kindle_edition edition.

Tenzin Gyatso, the Fourteenth Dalai Lama, is the spiritual leader of the Tibetan people. Born in northeastern Tibet in 1935, he was as a toddler recognized as the incarnation of the Thirteenth Dalai Lama and brought to Tibet's capital, Lhasa. In 1950, Mao Zedong's Communist forces made their first incursions into eastern Tibet, shortly after which the young Dalai Lama assumed the political leadership of his country. In 1959, Chinese forces occupied the city, forcing His Holiness to escape to India. There he set up the Tibetan government-in-exile in Dharamsala, working to secure the welfare of the more than 100,000 Tibetan exiles and prevent the destruction of Tibetan culture. In his capacity as a spiritual and political leader, he has traveled to more than sixty-two countries on six continents and met with presidents, popes, and leading scientists to foster dialogue and create a better world. In recognition of his tireless work for the nonviolent liberation of Tibet, the Dalai Lama was awarded the Nobel Peace Prize in 1989. In 2012, he relinquished political authority in his exile government and turned it over to democratically elected representatives. He is the author of numerous books, including The Good Heart, The Meaning of Life, The World of Tibetan Buddhism, and The Compassionate Life.

David Patt received his PhD in Buddhist Studies from the University of Wisconsin-Madison and is the author of A Strange Liberation: Tibetan Lives in Chinese Hands. He recently served as executive director of the Dzogchen Foundation. --This text refers to an out of print or unavailable edition of this title.

Dom44
5.0 out of 5 stars Great book!
Reviewed in Canada on 2 June 2017
Verified Purchase
Only started reading the book but enjoying it immensely. Even though the subject matter is complex, I am finding the writing easy to understand. Definitely recommend this book to supplement any Lam Rim readings.
Read more
Report abuse

Timothy bob
5.0 out of 5 stars Great series! All intermediates must read
Reviewed in the United States on 12 January 2019
Verified Purchase
Dear interested buddhist enthusiast,
Volume three is the best so far. I am on volume four. Please read this book series, all five volumes. Thervada Buddhists especially. I am ecclectic please forgive me. As a contemplative please don't disregard intellectualism. Fare well, journey wisely and earnestly.
Read more
One person found this helpful
Report abuse

Jake
5.0 out of 5 stars Great book!!
Reviewed in the United States on 11 June 2014
Verified Purchase
A book taught us right from wrong and showed us correct path to achieve it. Very very very highly recommended!!!!!!!
Read more
3 people found this helpful
Report abuse
See all reviews
Get FREE delivery with Amazon Prime
Prime members enjoy FREE Delivery and exclusive access to movies, TV shows, music, Kindle e-books, Twitch Prime, and more.
> Get Started
Back to top
Get to Know Us
Make Money with Us
Let Us Help You
And don't forget:
© 1996-2020, Amazon.com, Inc. or its affiliates