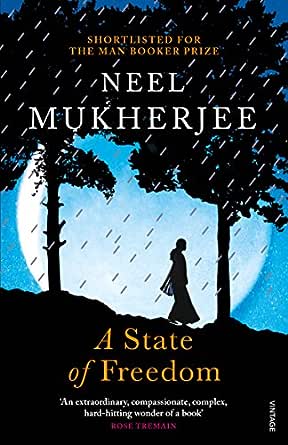 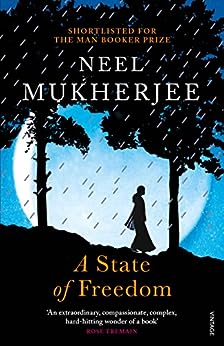 A State of Freedom Kindle Edition

"An extraordinary, compassionate, complex, hard-hitting wonder of a book. It is in a class of its own." (Rose Tremain)

"Neel Mukherjee's breathtaking A State of Freedom is that rarest, most wonderful of things: a book both literarily dextrous, full of unforgettable scenes, images, language, and characters, as well as a furious, unsparing, clear-eyed study of how a society's gross inequities of money and power demean and deform the human condition. The most astonishing and brilliant novel I have read in a long, long time." (Hanya Yanagihara)

"Fans of Neel Mukherjee expect that his books will be exceptional and once again he has produced just that. A State of Freedom is formally audacious, vividly observed, and deeply imagined. Unsentimental yet full of heart, grimly real yet mysteriously dreamlike, with characters who continue to live their complicated lives long after you've turned the last page. Just a beautiful, beautiful piece of work." (Karen Joy Fowler)

"A State of Freedom is an extraordinary achievement. Subtle and multi-layered, it's a study of the brutality of social divisions, written with tremendous tenderness; a work that insists on the dignity of figures obliged to lead undignified lives. A powerful, troubling novel. The moment I finished it, I began it again." (Sarah Waters)

"A State of Freedom is a novel like no other -- its prose is so rich, unequivocally precise and graceful that it allows Mukherjee to illustrate the most horrific of experiences with stunning compassion. A State of Freedom is more than a novel―it is an immersive experience. He writes like a painter, his language is his palette, one reminiscent of the late Howard Hodgkin's. Mukherjee brings to life the variation of India’s cities and towns in a dense multi-layered world where modern life, by accident or intention, tears at traditions that are centuries old. Throughout we are reminded of how little power many have over their lives and of emotional and financial economies so fragile that something as small as a single egg can carry great weight." (A.M. Homes)

"This is a great hymn to poor, scabby humanity―a devastating portrait of poverty and the inhumanity of the rich to the poor. A masterpiece!" (Edmund White)

"an extraordinary account of the tenacious will to survive… He seeds his tales with images of unexpected beauty… Freedom here is relative, complicated, fissured and often won at another’s expense" (Siobhain Murphy The Times)

"Neel Mukherjee shows himself to be one of those contemporary authors who invites readers to make connections between seemingly disparate story strands… Combined with Mukherjee’s rich realisation of the novel’s individual elements, this indeterminacy makes A State of Freedom a powerful, memorable treatment of a theme too often reduced to uninvolving didacticism" (Adam Lively Sunday Times)

"The beauty of Mukherjee’s prose sucks the reader into an alternative world, where misery, deprivation and the struggle to exist another day are normal" (John Harding Daily Mail)

"Mukherjee… homes in on the restless, the disinherited, the socially trapped… Mercilessly observant, he does not spare the reader but leavens scenes of savagery, squalor and despair with moments of rainbow vividness, all the more striking for the muddy, cacophonous backdrop from which they are brought forth… In a significant and porous work, Mukherjee gives congruence and visibility to these fractured, hidden lives" (Catherine Taylor New Statesman)

A novel of multiple narratives, set in contemporary India, the new book from Man Booker Prize-shortlisted author Neel Mukherjee explores the urge to escape the life we are given for something better.
See all Product description
click to open popover

gammyjill
4.0 out of 5 stars Excellent stories about today's India...
3 January 2018 - Published on Amazon.com
Verified Purchase
Indian-born author Neel Mukherjee's newest novel, "A State of Freedom", is actually five stories of various lengths, all set in today's India. Several of the stories clearly impact on each other, and I have the feeling that if I knew more about what Mukherjee is writing about, the stories - their plot and characters - would be even more aligned.

I haven't read Neel Mukherjee's previous two novels, but I was intrigued by the description of "A State of Freedom". I've never been to India but have had an abiding interest in the country, its history, culture, and society. Mukherjee's stories all seem to center around food. Either the preparing and eating of food or the politics behind those who have either not enough or too much. The stories are set in Kolkata, Mumbai, and small villages in the hinterlands, and the characters travel between them as their positions in society change. And as society changes, the gap between wealthy and poor gets a bit smaller as the idea of both education and revolution gain importance to the poor.

I enjoyed the five stories but I skimmed the third one because of the cruelty and violence. Neither was gratuitous but I wasn't comfortable reading it. Mukherjee is a great writer and I'm looking forward to reading his backlist!
Read more
14 people found this helpful

WINTHROP SMITH
5.0 out of 5 stars An artfully constructed, important book.
13 February 2018 - Published on Amazon.com
Verified Purchase
For writers, one means of telling a story is to allow individual voices, as opposed to a single narrator, tell their sides. Too often the movement isn't seamless. The book progresses in jolts. Here, a master writes viewpoints which open things up, adding textures and colors. It's a book, as well, to eat, to taste. It's a reality check for Americans fixated on the Dow: imagine yourself here in India.
Read more
3 people found this helpful

Trisha
5.0 out of 5 stars For this short book it is a tough read.
20 August 2019 - Published on Amazon.com
Verified Purchase
It was difficult figuring out what the focus of the book was trying to get across to the reader. Human misery, drive and being is finally evident.
Read more

Amazon Customer
5.0 out of 5 stars Excellent character development
21 February 2018 - Published on Amazon.com
Verified Purchase
Excellent character development. I found the book very hard to put down. There are several seemingly separate stories which connect - and the connection at times is a tad stretched. The author clearly loves India and he captures the movement and complexity of the country.
Read more
One person found this helpful
Go to Amazon.com to see all 23 reviews 3.8 out of 5 stars
Get FREE delivery with Amazon Prime
Prime members enjoy FREE Delivery and exclusive access to movies, TV shows, music, Kindle e-books, Twitch Prime, and more.
> Get Started
Back to top
Get to Know Us
Make Money with Us
Let Us Help You
And don't forget:
© 1996-2020, Amazon.com, Inc. or its affiliates