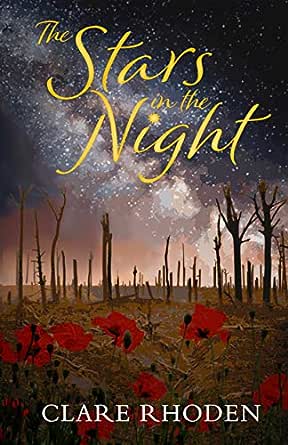 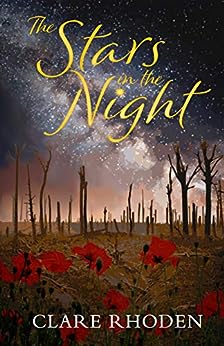 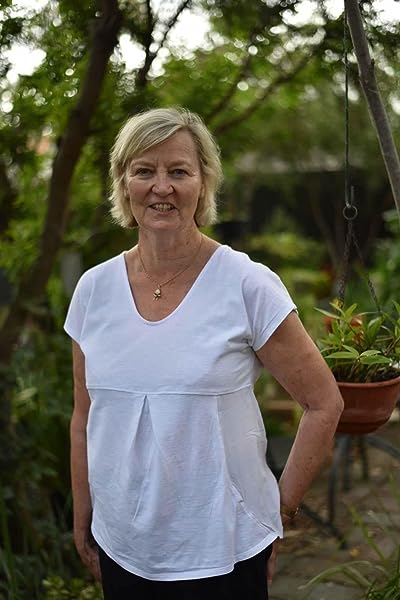 The Stars in the Night Kindle Edition

Clare Rhoden completed her PhD in Australian WWI literature at the University of Melbourne in 2011, and a Masters of Creative Writing in 2008, in which she investigated the history of her grandparents who emigrated for Europe to Port Adelaide in January 1914. The Stars in the Night is the result of her research. Clare also writes sci-fi and fantasy. She lives in Melbourne, Australia with her husband Bill, their super-intelligent poodle-cross Aeryn, a huge and charming parliament of visiting magpies, and a very demanding/addictive garden space. --This text refers to the paperback edition.

Mark ODwyer
5.0 out of 5 stars A must-read novel about the War to End All Wars and the scars it left
Reviewed in Australia on 18 April 2020
Verified Purchase
1970 in suburban Melbourne: ‘That was how it happened, thought Harry, feeling the memories rise; they were never far away .. Trusting you to remember, trusting you to do something about it. As if you could fix things, mend the dead, put the world back the way it was.’

And so we go back into Harry’s memories, into the seared experiences that gave him writhing nightmares for decades, back to the day in 1917 when Harry cannot find his foster brother Eddie. Harry searches. He crawls out of the Passchendaele mud in no-man’s land searching for him. He looks into dugouts and stumbles down communication trenches and he asks at Casualty Clearing Stations. Fifty years later his granddaughter comes upon an old notebook in the attic and asks, "Who is Eddie?”

This is a story of love. Nora waits for Harry, but he harbours fears whether she can accept him after what he has been through. Eddie hopes for a life with Claudelle. It is a story too of love between men, the love of of brothers-in-arms, Harry and Eddie, Wallis, Hartigan, Alex. From Gallipoli to Flanders the war thunders over all of them like the endless numbing artillery barrages. But it does not end for them when the guns fall silent.

We only recently have begun to speak openly of PTSD ('shell shock' in Harry's day) and understand that it messes people up for a long time. Harry survives wounds and sickness and comes home But in dreams he returns to no-mans’ land, still trying to rescue comrades. The women have their losses too, made harder by Harry’s inability to speak of things he simply does not want to bring to mind. Harry’s mother Ellen, for instance ,cannot connect with him any more.

‘The mines and the shelling is like the end of the world. The worst we have seen, and we have seen some bad ones. Harry and me are fine but it makes you cry. There are so many dead you cant help but walk on them’. Eddies notebook.

Clare Rhoden takes us into this vast arena of events, from the debate in Australia about the rightness of the war, into terrible battles, and on through into the waves of pyschological effects upon those who survived and their families. These 220 pages hold material for a 1000 page book. But the author has brought these large and complicated things down to the personal level by revealing things in the way that we all ordinarily talk to each other: through a household argument, the queries of a nosy neighbour, the grumbles of soldiers about the food and the cold, the guarded talk about Gallipoli by a sergeant to a fresh officer as they weigh each other up, and through diaries and from letters home. This makes 'Stars in the Night' deeply personal and emotional. I got so caught up in it that I paused reading several times so as to absorb it. I cannot praise this novel highly enough both for its story and it’s technical execution.

Although it is about the experiences of Australian soldiers, this novel could really be about the horror of any war, not just the one that millions prayed would be ‘The War To End All Wars.’ The character Harry Fletcher, like thousands of veterans, could not bring himself to attend Anzac Day ceremonies but stayed quietly at home; yet for anyone interested in the scars left by the Great War and thus the origin of the ‘Anzac legend’, the facts of it, and sometimes the mythology of it, this is a must-read.

Note about ‘Anzac’ to readers unfamiliar with it: The first units of Australians shipped out in 1915 were merged with the first New Zealanders into the Australia New Zealand Army Corps (ANZAC). Their losses in Gallipoli and later in France shocked both young countries. Australia, population four million in 1914, sent 417,000 men to the conflict, every one of them a volunteer. 62,000 died. Both Australia and New Zealand forces suffered casualty rates of over 55% – killed, wounded, gassed, captured, marked as ‘missing’. The term ‘ANZAC’ endures.

B. Marshall
5.0 out of 5 stars Engaging, enjoyable, emotional, and recommended war / family drama.
Reviewed in Australia on 2 May 2020
Verified Purchase
War stories, especially those about WWI, generally focus either on the horrors of the trenches, or the trials of the women left behind. There’s plenty of oral histories and first-person accounts of both, so writers and authors are spoiled for choice of insights.

To manage both in the one novel is a worthy, if potentially clumsy, premise. The historical writer must undertake years of research, yet not weigh down their prose with 'authentic' detail. Avoiding overly familiar or clichéd situations and characters is a tough gig – so much has been written of this era, especially for British and Australasian readers. Avoiding sentimentality and cloying focus on ‘sacrifice’, ‘hardship’, ‘mateship’ and other ‘ANZAC values’ is often difficult. To write across an entire era – in this case from WWI to the 1970’s – and with multiple time-jumps, is fraught and risky.

Rhoden not only succeeds in all of this, by writing with focus, care and insight, she creates a richly emotional novel woven from the deeper truths of war and love.

In part a straightforward war drama, in part family drama, I was hooked by Rhoden’s clean, effective and unpretentious prose, captured by her characters and their journeys, and genuinely affected emotionally. I’m not prone to gushes of what normal people call ‘feelings’ – I have a stony, black heart – but I confess there were several points where I…well, let’s just say hay-fever is something I experience from time to time, and several bouts coincided with reading Stars in the Night.

Rhoden also captured the trenches as well or better than any I’ve read, and I’m even prepared to compare her favourably to Pat Barker’s stunning literary masterpiece, The Regeneration Trilogy, on that score.

Stars in the Night also features one extra aspect I rate highly – it’s written neither for women or men but both. Well done, Ms Rhoden – I dips my lid, and thanks you.
Read more
Helpful
Comment Report abuse
See all reviews

Malve von Hassell
4.0 out of 5 stars Beautifully written, moving account of two men’s lives against the backdrop of the Great War
Reviewed in the United States on 26 June 2020
Verified Purchase
Harry and Eddie, his foster brother, were close and had always looked out for each other. In World War I, they both enlist in the Australian army. They survive the utter shambles of a military campaign at Anzac Cove in Gallipoli, where over 250,000 lives were lost on both sides, only to be sent to the theater of war in France. Only one of them comes home. The story is told from different perspectives and time frames, drawing on letters, diaries, as well as the experiences of a granddaughter trying to puzzle out what had happened to her beloved grandfather in the war. Initially I found the switching back and forth between narrators and time frames confusing, but ultimately found that it worked for telling this complex story. The horrors of war, survivor guilt, and PTSD are depicted in a compelling manner and juxtaposed with elements of hope in the bonds of friendship, family, and love. Details of life in South Australia provide additional color to this well written and compelling tale.
Read more
Report abuse
See all reviews
Get FREE delivery with Amazon Prime
Prime members enjoy FREE Delivery and exclusive access to movies, TV shows, music, Kindle e-books, Twitch Prime, and more.
> Get Started
Back to top
Get to Know Us
Make Money with Us
Let Us Help You
And don't forget:
© 1996-2020, Amazon.com, Inc. or its affiliates