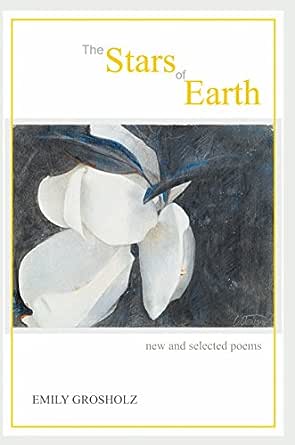 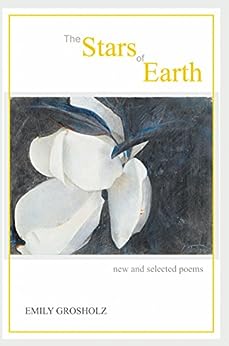 The Stars of Earth: New and Selected Poems Kindle Edition

Emily Grosholz is a poet of radiant intelligence, patient lyricism, and meticulous craft. She has a gifted naturalist’s regard for the living world and wherever she looks that world, for its part, offers her its poetry. With a philosopher’s wit and a mathematician’s eye for beauty, she can link geometry and physics to the apricot color of a robin’s breast. She also writes with great empathy for her subjects. Hers are some of the best poems about parenthood and friendship that we have. The Stars of Earth collects four decades of her elegant and excellent work. We are lucky to have it.
— Mark Jarman, author of The Heronry

Compressed on the page then wafting ever outward on wings of imagination, fine poetry and fine theorems are first cousins. Or, more rarely, in poems like Emily Grosholz’s, twins: “Timid and fluid rainbows/ Over the nacreous surfaces/ Of shells, on peacock feathers/ And soap-bubbles, appear/ Whenever incident light/ Reflects off nether and upper/ Laminae of films, one wave train/ Tagging after another/ Like a younger sister.” Read this book.
— Marjorie Senechal, author of Shaping Space

I admire Emily Grosholz because of the sounds her poems make. She is always experimenting, even when the results seem effortless. She understands diction, syntactical proportion, when to write plain, when to extend the measure. The cunning irregularities are what most compel: the reader is never allowed to relax. Each poem, even those without a dedication, appears to be addressed to a singular reader and has a specific occasion. The general readers among us are admitted courteously to the civilizing company. The heart, not as a hackneyed valentine but as a living muscle, is always present as pulse and passion. The overwhelming sense these poems give is of affirmation.
— Michael Schmidt, author of New and Collected Poems

The Stars of Earth is that rarest of books: a record of living with mind, heart, and all five senses wide awake. Emily Grosholz chronicles everything from love to loss, childhood to marriage to parenthood. She brings us fields of corn “speaking in tongues,” woods that “decant the autumn moon,” soccer-playing kids who double as cheetahs and gazelles on the veldt. She explores two continents and the minds of scientists, artists, friends, long-lost family. And as befits a poet-philosopher whose pursuits include the philosophy of mathematics, she achieves potent mixes of the daily and the deep: Nietzschean thought served up in a deli; a toddler’s first steps along “the frail parabolas of love.”
— Melissa Balmain, author of Walking in on People

Emily Grosholz was born in the suburbs of Philadelphia, and attended the University of Chicago and Yale University. Since 1979 she has taught at the Pennsylvania State University, where she is now Edwin Erle Sparks Professor of Philosophy, African American Studies, and English. Her first book of poetry, The River Painter, appeared in 1984; her most recent book, Childhood, has been translated into Japanese, Italian and French, and has raised $2500 for UNICEF. She has lived in France, Germany, and the UK, and traveled to Japan, Russia, Costa Rica, and around the Mediterranean and the Baltic. She and her husband, Robert Edwards, raised four children in State College, Pennsylvania, on the flanks of the Tussey Ridge, countryside that they and their neighbors, with the ClearWater Conservancy, are working to protect and preserve. Her book, Great Circles: The Transits of Mathematics and Poetry, will be published in 2018 by Springer. THE STARS OF EARTH: NEW AND SELECTED POEMS (Word Galaxy Press, 2017) is her eighth book of poetry. --This text refers to the hardcover edition.

Jacqueline King
5.0 out of 5 stars Puddles and Galaxies Galore
Reviewed in the United States on 20 November 2019
Verified Purchase
I have read and loved Emily Grosholz's poetry for most of my life. Her poems shimmer and sing. She combines a scholarly sensibility with deep, empathetic insights into her many far-flung relationships. She captures the brief, beautiful moments of family that add up to a lifetime--her son's delight in puddle-splashing and language acquisition, her daughter's effortless singing, the comforting contours of her husband's peacefully snoring body. Or, with equal finesse, she paints the shape of a complex, decades-long friendship in several spare, compassionate strokes. Grosholz's years of work as a philosopher of mathematics and science inform her appreciation and rendering of the natural world, present in almost every poem. As her poetry delves into mathematical or cosmological depths, it challenges the boundaries of a layperson's understanding and yet somehow remains accessible, conveying the essence rather than the details of abstract concepts. She brings wit and fluidity of tone to arcane or awe-inspiring subjects: "Doesn't it keep you up at night, this outward / Rush of galaxies fleeing themselves and us / Into the infinite arms of the multiverse?" she asks a cosmologist. (The answer: No, more concerned with failure to back up quantum mechanics.) The Stars of Earth brings together Grosholz's poems, old and new, into a wonderful collection, worth coming back to again and again.
Read more
Report abuse

Sarah G. Khedouri
5.0 out of 5 stars A Continual Pleasure
Reviewed in the United States on 15 November 2019
Verified Purchase
Whether it’s a poem about following the Dordogne River on a bicycle or feeling the stirring of her first child inside her, Emily Grosholz’s poems never fail to move me. They speak both to familiar everyday emotions and to deeper yearnings for understanding a life well-lived. Verses encapsulating a single moment may evoke the rich smells and colors of markets or woodlands from Europe to Philadelphia, then sweep the reader into a meditation on love, friendship or motherhood. I love to dip into this book, and I always come away warmed by what I’ve read.
Read more
One person found this helpful
Report abuse
See all reviews
Get FREE delivery with Amazon Prime
Prime members enjoy FREE Delivery and exclusive access to movies, TV shows, music, Kindle e-books, Twitch Prime, and more.
> Get Started
Back to top
Get to Know Us
Make Money with Us
Let Us Help You
And don't forget:
© 1996-2020, Amazon.com, Inc. or its affiliates