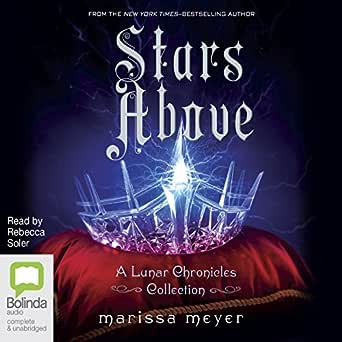 Stars Above: A Lunar Chronicles Collection

E. A. Solinas
TOP 10 REVIEWER
4.0 out of 5 stars Tales of Earth and Luna (some spoilers)
5 February 2016
Format: Kindle Edition
The Lunar Chronicles are a series with lots of complexity and history -- whether the characters are from Earth or Luna, they have a lot going on in their lives. So it only seems natural that Marissa Meyer expanded her science-fiction fairy-tale series with "Stars Above," a collection of her short stories that fill in all the gaps of the characters' pasts -- and though readers of her series will know where each story goes, every one is a gripping little tale that fleshes out the wider story.

Each of the stories focuses on a character -- some major, some supporting -- in the Lunar Chronicles universe, but several years before the events of the main series. They're in roughly chronological order, beginning with "The Keeper," and Michelle's struggle to care for and hide the Lunar princess in the basement of her farmhouse. Then there is "Glitches," where a small cyborg child is brought to live with her new stepfamily, only to be stranded with a cruel, bitter stepmother and bratty stepsister.

And then there are stories for other characters -- Z, a boy torn from his family and forever altered into an elite, wolfish soldier for the Lunar Queen; Carswell, a wealthy young boy whose schemes and con games are interrupted by compassion; Cress, a young "shell" whose ingenuity causes her to be exiled into space; Winter's regret over the use of her gift prompts her to vow not to use it again, with terrible results; and Kai brings his beloved android to a simple mechanic's shop, with life-changing results.

There is also "The Little Android," a bittersweet tale based on "The Little Mermaid," where a robot falls in love with a human. And there is a new novella called "Something Old, Something New," a tale taking place after the end of the series. Cinder and her friends reunite on Scarlet's farm for a very romantic occasion, and the cyborg has the chance to finally come full circle to where her journey began.

It goes without saying that "Stars Above" is a collection that should only be read after one has finished the rest of the Lunar Chronicles, because it effectively gives away half the twists that take place in the series -- including the ending. While the novels are a complete story unto themselves, these short stories allow Meyer to fill in the cracks between her stories, exploring the characters at pivotal, life-changing points in their lives. For some, it's simply finding a new place in life. For others, it's being physically transformed into something new -- a cyborg or a wolf-man.

One or two of the stories are a bit lightweight ("The Mechanic" is simply Kai and Cinder's first meeting from HIS point of view), but most of them have a wrenching quality at their heart. Most of these tales -- except for Carswell's, and the series' coda -- are stories of loss, pain, death, alienation and the cruelty of Queen Levana, in one way or another -- and Meyer's sleek, detailed writing creates some scenes of true horror (Winter being forced to carve up her own face) or spellbinding beauty ("But she was already vast and bright and endless").

And it does help flesh out the characters even more, especially when they focus on a character who is either very internalized (Ze'ev) or doesn't appear much in the flesh (Michelle, Scar's grandmother). Cinder in particular is explored as a clumsy, amnesiac child who is offered little but scorn, slowly growing from her initial depressed blankness into a clever child who finds a niche where she belongs -- and her brief appearances throughout the stories allow us to see her grow in strength and confidence.

This collection also has a few sample chapters from Meyer's forthcoming book "Heartless," which is based on Lewis Carroll's Wonderland books. It follows Catherine, the daughter of a bombastic Marchioness, who bakes a set of lemon tarts shortly before a royal ball.

Best read after the rest of the series, "Stars Above: A Lunar Chronicles Collection" expands the characters' backstories, adding new richness and depth -- and providing a solid, satisfying coda to the series. Clever, bittersweet and beautifully written.


Read more
3 people found this helpful
Helpful
Comment Report abuse
See all 1 customer reviews
Write a customer review
Get FREE delivery with Amazon Prime
Prime members enjoy FREE Delivery and exclusive access to movies, TV shows, music, Kindle e-books, Twitch Prime, and more.
> Get Started
Back to top
Get to Know Us
Make Money with Us
Let Us Help You
And don't forget:
© 1996-2020, Amazon.com, Inc. or its affiliates