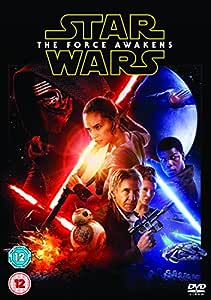 Dylan Browne
4.0 out of 5 stars A Decent Revisit To Kick-Start Star Wars For A New Generation
5 December 2017
Format: Blu-ray
J.J. Abrams proves that he can pull off a competent revival of something as big as Star Wars With Episode 7.

Star Wars Episode 7 is by no means perfect, for one the story structure is most definitely based on A New Hope, is that a bad thing though?

Shot on 35mm film, Episode 7 looks great on Bluray and has had a very faithful transfer with all of the glorious film gran left pretty much intact.

The familiar structure lends itself easily to nostalgia and works for the most part, if you are a fan of Star Wars you will most likely enjoy the film.
Personally I think that Episode 7 did it's job in terms if reinvigorating the franchise and the follow ups will carve their own path.

joel wing
2.0 out of 5 stars No respect for the audience by simply remaking Star Wars A New Hope
3 August 2019 - Published on Amazon.com
Verified Purchase
When I saw this film in the theater I really liked it. It seemed like a good reboot to the Star Wars franchise. Unfortunately upon further viewing I have come to enjoy it less and less.

The basic problem is that it is just the first Star War movie rehashed. Instead of the Empire the First Order is now the bad guy. Instead of the young and inexperienced Luke Skywalker there’s Rey played by Daisy Ridley. Instead of Darth Vader there is Kylo Ren in some horrible casting played by Adam Driver Vader’s grandson. Instead of the desert planet of Tatooine there’s the desert planet of Jakku. Instead of the movie starting with Princess Leia being captured by the bad guys but not before she puts some important information for the rebels inside a little robot that escapes, it’s pilot Poe Dameron played by Oscar Isaac that’s caught and puts data into his bot BB-8 that escapes. And of course the bot is found by the hero aka Skywalker who is Rey in this film, and the information leads to an old and wise Jedi Knight Obi Wan in the original and Skywalker in this version. Finally, what is a Star Wars flick without a Death Star, this time called Starkiller Base. That means you can guess how this ends. It’s like the writers and director had no respect for the audience at all, and didn’t want to spend the time coming up with an original story.

The only really good new twist to the film was the arrival of Han Solo played by Harrison Ford and Chewbacca played by Peter Mayhew because they added some levity to the story. Otherwise just watch Star Wars A New Hope. It’s a far better movie.

NimitsTexan
2.0 out of 5 stars More "Inclusive," Less Interesting Version of "A New Hope"
16 June 2018 - Published on Amazon.com
Verified Purchase
Extremely derivative of the original Star Wars movie (an act for act, if not a scene for scene, remake) with even more special effects and bigger plot holes. It is almost as if those making the movie decided that be simply making the main character female and minimizing the presence of white, male actors for the good guys, they could avoid wasting time on trivial things like plot and story telling.
Read more
52 people found this helpful

Susan E. Gassler
5.0 out of 5 stars Best of the New Trilogy By A Legends Fan
4 April 2019 - Published on Amazon.com
Verified Purchase
This is the best overall film of the New Trilogy thusfar. The Last Jedi is hyper controversial and philosophical [and I actually love it because It explores a tough subject matter, disillusionment among Jedi and Sith and rebirth of faith in the Force]. The Force Awakens captures a glint of the glory, awe, and wonder of A New Hope and Empire Strikes Back.

The Force Awakens is superior to the Prequels/Anakin Skywalker Arch because it invests in the characters ans builds on tjeir realtionahips realistically, similar to A New Hope: common objective, common enemy, team work anx etc oppose to the Prequels more complex political alliances, and emphasis on Zoroastrian and Dualist ideologies. The Force Awakens is pure fun, with enough lore and wonder to keep it from being campy or a total knock off.

In particular I applaud J.J. Abrams for his handling of Kylo Ren as a villain. He isn’t a Vader clone or Darth Maul cult creating character, he is the antithisis, unsurd of himself and conflicted, his insecurity and tryingvto overshadow it with Dark Side prowess makes him actuslly more relatable than the dogmaticism of Darth Vader. Kylo Ren is a Sith for a new generatiok, that no doubt may carry the same conflict inside.

Rey who has been labeled a Mary Sue, is acruslly refreshing. Men have had plenty of Jedi and Force affilates to choose from: Luke Skywalker, Anakin Skywalker, Obi-Wan Kenobi, Yoda, and maby more; girls and women have only ad Aayla Secura and Ahsoka Tano for female Jedi and they are aliens not humans like Rey. [Legends fans have had Bastila Shan and Mara Jade Skywalker for major human female Jedi].

Finn and Poe both are welcome heroes, one a former stormtrooper and the other a resistance pilot. Their dialogue during their escape from The First Order at the beginning of the Force Awakens always gives me a good chuckle.

I want to seal this review by stating I am a Legends/EU die hard who knows Dash Rendar, Exar-Kun, Ulic-Quodroma, Mara Jade, Revan, Darth Plagueis, Prince Xinor, the Jed’Daii (proto-Jedi tribes), Ashla and Bogan (Light and Dark Side), Force Grip is a grey power (light or dark depending on who you are using it on), and so much more. I have been following the Legends, called Expanded Universe when I was young, and I enjot the Force Awakens.
Read more
19 people found this helpful

Chuckles
5.0 out of 5 stars I waited for a good price.
7 October 2017 - Published on Amazon.com
Verified Purchase
This movie continues a world changing series of films that literally helped usher in updated 'space adventure' movies.
Really well written and paced. Seems to fix in the timeline accurately and has all the elements you seek from a Star Wars movie. Wonderful vistas, intense and exciting when it should be and fun for anyone over 10 years old.
Like all used items, I wait for a while to see the price averages and when I see a good deal I jump on it. Once you have it, and if you're a sci-fi fan, it'll be on your shelf forever and will be viewed over and over with something new that you missed each time. Buy w confidence.
Read more
19 people found this helpful

Rthienes
5.0 out of 5 stars Geek heaven
11 October 2017 - Published on Amazon.com
Verified Purchase
Star wars was a film series that defined my youth. I have owned all of them at some point or another in a variety of formats and have all but memorized them from watching them over and over.
I also have been on love with 3d since my youth. I bought a 3d tv and blu ray years ago, but the Star Wars series was not done in 3d...until The Force Awakens. No matter how many times I'd seen the movie, adding the full, Rich 3d made it come alive. The sound is rich and vibrant with the epic John Williams sound track.
The behind the scenes features are informative and entertaining for those who love to know how it's done and what all goes into the production of the film.
Even the case is a work of art. From its attractive, 3d artwork on the cover to the beautifully collectors item inserts, this set seems like it should be far more expensive than it actually is.
Whether you loved the film or are a critic, the power of the production on this product is admirable. Well done, folks. Well done.
Read more
12 people found this helpful
Go to Amazon.com to see all 9,600 reviews 4.4 out of 5 stars
Get FREE delivery with Amazon Prime
Prime members enjoy FREE Delivery and exclusive access to movies, TV shows, music, Kindle e-books, Twitch Prime, and more.
> Get Started
Back to top
Get to Know Us
Make Money with Us
Let Us Help You
And don't forget:
© 1996-2020, Amazon.com, Inc. or its affiliates