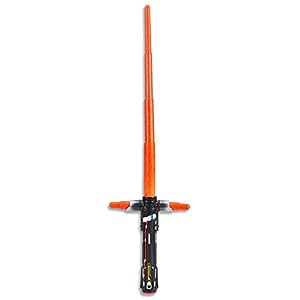 Enter the world of Star Wars and launch into action and adventure! Discover a galaxy of starships and vehicles, and get immersed in exciting stories of good versus evil against a backdrop of a universe populated by heroes, villains, droids, and space creatures with the Star Wars: The Last Jedi Bladebuilders Kylo Ren Extendable Lightsaber!

Imagine the thrill of a heated battle with this Star Wars: The Last Jedi Kylo Ren Extendable Lightsaber that extends with a flick of the wrist! Lightsaber features movie-inspired design to look like the iconic fiery Lightsaber of the dark warrior, Kylo Ren.

After a stinging defeat by the scavenger Rey, Kylo Ren refocuses his efforts on destroying the Resistance. Though his powers in the dark side have increased, Kylo still has much to prove to his shadowy mentor, Supreme Leader Snoke.
Imagine the action of a fiery Lightsaber duel as Kylo Ren with the Star Wars: The Last Jedi Bladebuilders Kylo Ren Extendable Lightsaber!

Hasbro is committed to being an ethical and responsible company and is one of the recognized toy industry leader in the areas of product safety, ethical sourcing and philanthropy.

Launch into action and adventure in the world of Star Wars! Discover the exciting stories of good versus evil in a universe of heroes, villains, and aliens. A dark warrior strong with the Force, Kylo Ren commands First Order missions with a temper as fiery as his unconventional lightsaber. You can feel like Kylo Ren with this Extendable Lightsaber that extends for a duel with a flick of the wrist. Imagine the thrill of a heated battle with this and other role-play toys from Star Wars. Each sold separately.

Irvin Bravo
5.0 out of 5 stars Definitely worth it, it’s not a lot but it’s great enough.
13 April 2018 - Published on Amazon.com
Verified Purchase
I like this light saber, for that price this really surprises me. If you are expecting a top quality replica just forget it, but if you like cool and not complex stuff this is for ya.
Read more

MommyLDT
3.0 out of 5 stars Gets stuck
11 January 2019 - Published on Amazon.com
Verified Purchase
This product is okay. My boys play with them but the sword gets stuck often. Pretty much every time they try to swing the sword part out it doesn’t work. It constantly gets stuck. I am consistently having to pry the sword part out with a butter knife. I tried putting baby oil on it to make it glide out better but that didn’t work. I just wish it worked better.
Read more
4 people found this helpful

DTW
5.0 out of 5 stars Surprised by the quality
27 January 2019 - Published on Amazon.com
Verified Purchase
It's not like you could actually use these in a stick fight, but I was pretty surprised at the quality of these. These are sturdy enough to withstand repeated impact with another (preferably light side) lightsaber, or even the skull of an obstinate sibling! The only thing I wish they would add to these is an alert when said lightsaber is being used to persuade a sibling to fall in line.
Read more
One person found this helpful

Robert E Cozad II
3.0 out of 5 stars Cheap but often gets stuck
14 July 2018 - Published on Amazon.com
Verified Purchase
I ordered this for my 3 year old after his previous light saber broke. I have not been particularly impressed by this one. I went for something economical as he is still young, so this has no light or sound like many others. The one feature is the retraction which only works some of the time hence the 3 stars. The pieces often get stuck and you have to pull on them or shake to get them loose. Decent product for the low price, but I would suggest looking at something better.
Read more
Go to Amazon.com to see all 49 reviews 3.9 out of 5 stars
Get FREE delivery with Amazon Prime
Prime members enjoy FREE Delivery and exclusive access to movies, TV shows, music, Kindle e-books, Twitch Prime, and more.
> Get Started
Back to top
Get to Know Us
Make Money with Us
Let Us Help You
And don't forget:
© 1996-2020, Amazon.com, Inc. or its affiliates