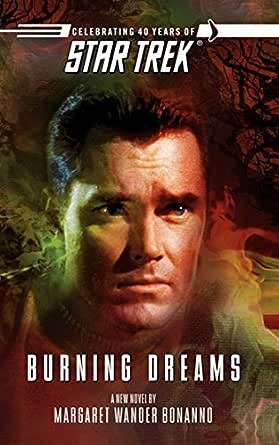 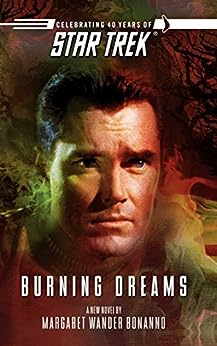 Margaret Wander Bonanno is the New York Times bestselling author of Star Trek the Lost Era: Catalyst of Sorrows, Star Trek: Dwellers in the Crucible, and Star Trek: Strangers from the Sky, as well as two science fiction trilogies, The Others and the Preternatural. --This text refers to an alternate kindle_edition edition.

Greggorio!
TOP 100 REVIEWER
4.0 out of 5 stars ITS A TREK NOVEL, JIM, BUT NOT AS WE KNOW IT!!!!!
Reviewed in Australia on 20 May 2016
Verified Purchase
DOES BURNING DREAMS tell the story of one of Starfleet's greatest heroes? In this enthrallingly original tale of love, life, death and heroism all set amongst those beautiful stars we all wonder at, this is but one of a plethora of questions that may well arise in the mind of the patient reader and dedicated fan of the world's greatest science fiction franchise. If nothing else, it does a fantastic job of humanising the man in a way that no Trek book ever has, or ever will.

It could be said the first half is slow and tedious, and yet another reader may well choose to describe it as heartbreakingly beautiful and truly surreal.

It morphs into a classic Trek adventure in the second half and having gotten this far into the story, you won't be putting the book down until you reach THE END. Chris Pike is a family man and he went through hell and back before he put one foot on board the Enterprise. The reader is almost guaranteed to require a box of tissues before you reach the end, and that is not because of the natural way of life, the universe and everything that comes along with it. The final chapter of the book is pure genius, but then again, its also pure Star Trek, so none of us should be surprised at that.

The story jumps around from view point to viewpoint, as well as from time frame to time frame, and this might take some getting used to for some, but seasoned Trekkies shouldn't find this too much of an obstacle to get over.

I wont give this book full marks. Its not perfect, its not great, its not a classic. But its a book every serious Trek fan should read. You deserve to read it, the author deserves the royalties from your purchase, and for God's sake, Chris Pike certainly deserves your time and attention.

M. Ries
5.0 out of 5 stars An outstanding Pike story
Reviewed in the United States on 24 July 2019
Verified Purchase
For me the stories of Capt Pike are every bit as compelling as those of Capt Kirk. Burning Dreams delivers the context in which we can really enjoy and appreciate the Pike character, his struggles, his loves and even his passing.
I hope you enjoy this book as much as I did.
The for reading.
Read more
4 people found this helpful
Report abuse

Henry
5.0 out of 5 stars Great read about the captain before James T. Kirk
Reviewed in the United States on 22 May 2020
Verified Purchase
Before James T. Kirk took command of The USS Enterprise, there was Christopher Pike. Originally introduced in the series "unaired" pilot "The Cage" before the studio decided to to move on with having Kirk take the lead. In this story we finally get to learn about his life before joining starfleet as a young boy through flashbacks. The early chapters may seem slow at first but it keeps you wanting to find out more.

Just be prepared to have tissues ready in later chapters.

Note: This book was published in the 2000s, so this story is non-canon now that we have Pike who was introduced in season 2 of Star Trek: Discovery, and about to star in Strange New Worlds. That being said, this book is still worth a read!
Read more
One person found this helpful
Report abuse

Martha J Samuels
5.0 out of 5 stars Perfect
Reviewed in the United States on 24 April 2019
Verified Purchase
Loved this so much. Created History for Pike that fits well what was presented in TOS. And lets us know what happened.
Read more
4 people found this helpful
Report abuse
See all reviews
Get FREE delivery with Amazon Prime
Prime members enjoy FREE Delivery and exclusive access to movies, TV shows, music, Kindle e-books, Twitch Prime, and more.
> Get Started
Back to top
Get to Know Us
Make Money with Us
Let Us Help You
And don't forget:
© 1996-2020, Amazon.com, Inc. or its affiliates