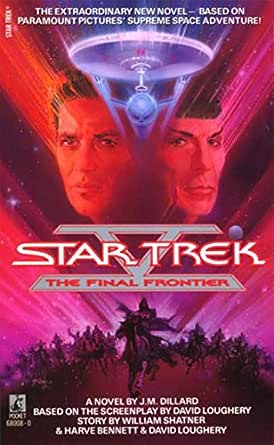 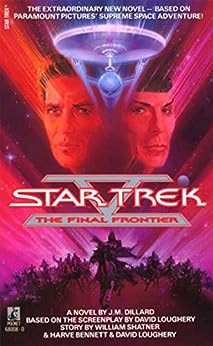 J.M. Dillard grew up coddled in the wilds of central Florida. After leaving her mother’s sheltering arms, she left Florida to reside in various locales, including Washington, DC, Vermont, and southern California. She herself now coddles a two-hundred-pound husband and two ninety-pound Labradors, all of whom are well-trained but persist in believing themselves to be lapdogs. She is the author of a plethora of Star Trek® books; as Jeanne Kalogridis (her evil alter-ego), she is the author of the acclaimed Diaries of the Family Dracul trilogy, and the historical fantasy The Burning Times. --This text refers to an out of print or unavailable edition of this title.

Jarrak
4.0 out of 5 stars Marshmelons
Reviewed in the United Kingdom on 23 October 2016
Verified Purchase
Ok then the movie is generally regarded as one of the failures of the Star Trek franchise but I don't hate it and there are some truly wonderful character moments in the story. This novelisation as you would expect gives us everything that is good about STV but adds so much more garnish to the story that you come away wondering what the studio were doing when setting the budget which limited to what they could do on screen.The background to Sybok as a child and how the events with his mother shaped him gave us so much more to work with and in turn added greatly to the Spock narrative later in the story. The extended storylines for the Klingons and the Ambassadors also contributed greatly to the enjoyment of the story. Novelisations at their best add to the movie and no doubt at all what we get from Jeanne should make even a STV hater sit up and take notice of perhaps what should have been even without the rock monsters.
A highly recommended novel in it's own right and an excellent example of a novelisation.
Read more
Report abuse

pgb38
5.0 out of 5 stars the quality of the item
Reviewed in the United Kingdom on 18 February 2019
Verified Purchase
item was as described
Read more
Report abuse

Robert Karma
5.0 out of 5 stars The Final Frontier as it was meant to be
Reviewed in the United States on 23 June 2016
Verified Purchase
Star Trek V: The Final Frontier has been a favorite Shatner vanity project for fans to heap criticism upon ever since its release in 1989. I saw the film in the theater and I admit, I was pretty underwhelmed. I've watched it again 3 or 4 times since then and there are some fine moments and great lines but overall, it just didn't feel like it was a completed or well-thought out story. I have read about the myriad of issues Shatner and his team faced in filming the movie and getting the VFX done. I recently saw a comment by a fan about how much better the book was than the movie. I took the chance and ordered the book to see if this was true. It was a wonderful experience revisiting this story as J M Dillard's narrative included so much of what was left out of the film. We find out about Sybok's childhood and call to be a messiah, why the Enterprise-A is so run down, how our heroes are feeling and what they are thinking, what transpired on Nimbus III, how Sybok reached each character and why Kirk was so adamant in refusing his offer to share his pain, how they safely crossed the galactic barrier, what Scotty was thinking when he hit his head, the background and politics of Klaa and his fellow Klingons, and so on. I would love to see Star Trek V the movie as written in this novelization because it just makes so much more sense and brings a depth that was missing from the film. I regret not reading this book back in 1989 but better late than never. Now I can rewatch STV and understand what was actually meant to be happening in the narrative.
Read more
5 people found this helpful
Report abuse

Jon M. Wilson
4.0 out of 5 stars Trying not to copy others, but they're right
Reviewed in the United States on 3 June 2003
Verified Purchase
Yeah, so what they said. The movie was a bomb, and the book tells the story the way it should have been.
Trek books are a tricky thing. Novelizations are a tricky thing. This particular Trek novelization does everything it should, and more. The only problem is that an artist is only as her subject matter, and Find God in the Center of the Galaxy still remains a hokey premise.
But let's focus on the good things. Every major Trek player gets a focus in this novel, including Sulu, who had a big part in all of McIntyre's novelizations. I was glad to see Dillard continue his story in the same vein. We get to see his and Scotty's "secret pain", as well as several other characters in the movie who got left out.
All the characters have depth -- the three delegates, the Klingons, Sybok himself, even the funky-toothed guy drilling holes in the opening shot. Every one is three-dimensional. Example: Klaa (Klingon captain) is no longer a chip-shouldered upstart with delusions of grandeur. He's a Klingon worthy of Klingons, and his motives in pursuing Kirk are revealed as devious and calculating, rather than dumb and bumbling as they appeared in the film.
This novel ties the movie into the others. Star Trek II-V form one continuous tale, without a whole lot of break in between. Yet they still make very little reference one to another. In this novel, we see a Kirk who was re-rejected by a dear love only months before, who lost his son very recently, and who is still coping with Spock's death and resurrection.
I have nothing but praise for the work of J.M. Dillard thus far. And this is no exception. If you, like me, consider Star Trek V the red-headed stepchild of the Star Trek series (no offense to all you red-headed stepchildren), then please read this novelization. Give it a shot. You'll like it. Or I'll buy you a Twinkie. (not really though)
Read more
7 people found this helpful
Report abuse

Chris Haynes
4.0 out of 5 stars Very good book
Reviewed in the United States on 12 August 2020
Verified Purchase
While the movie is not very good, I really liked the book. It went a lot deeper into the characters and their motivations and made the story a lot better.
Read more
Report abuse
See all reviews
Back to top
Get to Know Us
Make Money with Us
Let Us Help You
And don't forget:
© 1996-2021, Amazon.com, Inc. or its affiliates