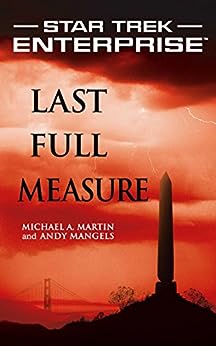 Michael A. Martin’s solo short fiction has appeared in The Magazine of Fantasy & Science Fiction. He has also coauthored (with Andy Mangels) several Star Trek comics for Marvel and Wildstorm and numerous Star Trek novels and eBooks, including the USA Today bestseller Titan: Book One: Taking Wing; Titan: Book Two: The Red King; the Sy Fy Genre Award-winning Star Trek: Worlds of Deep Space 9 Book Two: Trill -- Unjoined; Star Trek: The Lost Era 2298―The Sundered; Star Trek: Deep Space 9 Mission: Gamma: Vol. Three: Cathedral; Star Trek: The Next Generation: Section 31―Rogue; Star Trek: Starfleet Corps of Engineers #30 and #31 ("Ishtar Rising" Books 1 and 2); stories in the Prophecy and Change, Tales of the Dominion War, and Tales from the Captain's Table anthologies; and three novels based on the Roswell television series. His most recent novels include Enterprise: The Romulan War and Star Trek Online: The Needs of the Many. His work has also been published by Atlas Editions (in their Star Trek Universe subscription card series), Star Trek Monthly, Dreamwatch, Grolier Books, Visible Ink Press, The Oregonian, and Gareth Stevens, Inc., for whom he has penned several World Almanac Library of the States nonfiction books for young readers. He lives with his wife, Jenny, and their two sons in Portland, Oregon.

Andy Mangels is the USA TODAY bestselling author and coauthor of over a dozen novels―including Star Trek and Roswell books―all cowritten with Michael A. Martin. Flying solo, he is the bestselling author of several nonfiction books, including Star Wars: The Essential Guide to Characters and Animation on DVD: The Ultimate Guide, as well as a significant number of entries for The Superhero Book: The Ultimate Encyclopedia of Comic-Book Icons and Hollywood Heroes as well as for its companion volume, The Supervillain Book. Andy is a national award-winning activist in the Gay community, and has raised thousands of dollars for charities over the years. He lives in Portland, Oregon, with his long-term partner, Don Hood, their dog, Bela, and their chosen son, Paul Smalley. Visit his website at AndyMangels.com. --This text refers to an out of print or unavailable edition of this title.

4.5 out of 5 stars
4.5 out of 5
88 global ratings
How are ratings calculated?
To calculate the overall star rating and percentage breakdown by star, we don’t use a simple average. Instead, our system considers things like how recent a review is and if the reviewer bought the item on Amazon. It also analyses reviews to verify trustworthiness.

Miss Sharon P Halsey
5.0 out of 5 stars What's important to know.
Reviewed in the United Kingdom on 16 June 2021
Verified Purchase
I absolutely adore this book and the series it goes with and I have a very deep liking for Charles Trip Tucker the third the Chief Engineer on the Enterprise NX-01 and I was very happy to find that Tucker lived to old age even though his name and job changed. I always am in floods of tears at the last episode when he supposedly dies in a plasma blits also a shame that the series never went further and had more encounters to deal with and i adore the process the Enterprise crew could have grown into, I want to read all other books that go with this series, the ones I've read so I have a hard job putting down.
Read more
Report abuse

Rory Q
4.0 out of 5 stars Pretty enjoyable
Reviewed in the United Kingdom on 9 July 2010
Verified Purchase
The Enterprise books up to this point haven't been particularly breathtaking or dramatic; mostly due to the fact the stories were usually shoehorned between two episodes, so we knew nothing could affect our heroes long-term, meaning that we ended up with a legion of largely forgettable secondary characters.

Last Full Measure is also placed between two episodes, right at the start of season 3, but has a totally different feel to it. The series didn't do a particularly good job of capitalising on the interpersonal drama between Starfleet and MACO personnel on the ship, instead having a rushed conversation with Hoshi in "The Xindi" to introduce them (which was oddly placed, seeing as though they were supposed to have been on the ship 3 months by this point), and playing up Reed's feeling that the MACOs were stepping on his territory - ultimately serving to make Reed and Hayes come off as a bit schoolboyish and petty.

To the book's credit, it fleshes out that particular aspect more than the show did, and shows that it's not just Reed who is rubbed up the wrong way, but also Archer at times and particularly Mayweather, who gets an awful lot of time in the spotlight in this outing (something I'm never disappointed with considering how often he was overlooked in the series).

Aside from getting a little character development of Mayweather, we also learn Reed's real reason for not joining the Navy, and also see that he's a much more three-dimensional character than the show sometimes portrayed. At a couple of points in season 3, we see Archer come close to, or blatantly crossing an ethical line, and it's usually Reed that voices his concern or tries to act as Archer's conscience. We see the genesis of that in Last Full Measure, and also get inside Archer's head as he realises he's not the same person he was a few months previously, and he has to sacrifice some of his own morals in order to save an entire planet. There are some particularly dramatic scenes shown from the MACOs', Reed's and Archer's point of view that show these conflicting interests and emotions, and they're what stood out most for me.

The main story threads themselves are, I suppose, standard season 3 fare - follow up leads, poke around here, sabotage some Xindi hardware there. There is the potential that this book could have tried to make a huge impression in the Xindi arc, which would have seemed at odds with what we saw in the show, but Messrs Martin and Mangels very cleverly keep a somewhat important mission from becoming so big that you're left wondering why they'd never make mention of it in the series, then end up dismissing the story altogether because it's not canon. In the end, we also see the kissing and making up between Starfleet and the MACOs and also a new mutual respect found between both sides, which leads quite nicely into the interactions and co-operation we see later on in the season.

One particular thing of note is the seeds both authors have planted, which hint as to how they view the controversial finale, and should make interesting reading once I get into the Relaunch series proper.

In the negative aspect, we see very little of Phlox, T'Pol and particularly Trip and Hoshi in this outing, being that the latter two are laid up in sickbay for a majority of the story. Considering that Trip had a lot of focus during the Xindi arc, Hoshi just had a novel about her and this book is more focused on the MACOs rather than Starfleet, then it's understandable that this is the path the authors chose, and to be honest, it doesn't adversely affect the story.

All in all, it's a pretty strong novel, and easily the best of the Enterprise books up to this point. It's certainly of a higher quality than most books set during the series' timeframe, and apart from fitting into established canon quite well, expands on an area of the season which I felt was fairly underdeveloped and a missed opportunity during the series. I'm going into The Good That Men Do with high hopes that they can deliver another great story.
Read more
Report abuse

Amazon Customer ColinSM
1.0 out of 5 stars Not Impressed
Reviewed in the United Kingdom on 29 October 2020
Verified Purchase
Most disappointing book I have read about Star Trek.
A build up to nothing, I would not recomend to others.
Read more
Report abuse

Arnold Gill
3.0 out of 5 stars Decent read, but why?
Reviewed in Canada on 3 August 2015
Verified Purchase
Spoilers ahead....

This book had a lot of little story lines in it, drawn together, but at the end of it, I was left with a very empty feeling. What was the point? The author was clearly constrained by the placement of the story in the middle of Enterprises' third season. At the end of it, literally nothing of consequence could have happened - and nothing did. Sure, they killed off a couple of minor characters, dropped a lot of names, but nothing happened. There was no development of the characters, and what was started was left unfinished - especially the most interesting subplot, that of Archer authorizing and using torture to get information on the Xindi. It didn't even succeed as a self-contained story. I think the author did their best while writing shackled, but in the end it did not work.

It is very unlikely I will be reading this story again.
Read more
One person found this helpful
Report abuse