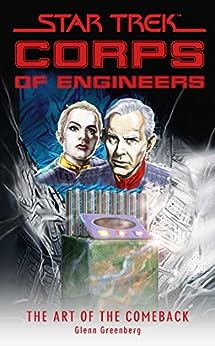 Glenn Greenberg is a comic book and fiction writer. He became a regular Marvel Comics writer at the beginning of his career and penned stories for The Spectacular Spider-Man, The Rampaging Hulk, The Silver Surfer, and Dracula. He was then hired to write the Star Trek: Untold Voyages comic book limited series. Since then, he has written several books in the Star Trek universe. --This text refers to an out of print or unavailable edition of this title.

Rory Q
4.0 out of 5 stars Entertaining if not a little predictable
Reviewed in the United Kingdom on 5 November 2012
Verified Purchase
Eagle-eyed readers may already guess that this story is a sequel to The Art of the Deal from earlier in the series, which also means some of the story threads started and left dangling will be picked up here.

In this story, we have the crew of engineers upgrading a secret listening post near the Romulan Neutral Zone, while Captain Gold is in a dark place again - not helped by the re-appearance of his old flame. Meanwhile, Rod Portlyn; the odious and amoral businessman from The Art of the Deal; is resenting his fall from grace and is already plotting his way back to the top. Luck is on his side when he finds a device that can make people simply disappear without a trace, and he starts on a mission of vengeance against the crew that led to his downfall.

The positive things about this story are that a lot of the Da Vinci crewmembers are well established now, which helps the reader to empathise with what they are feeling at various points - particularly when they start receiving news that close friends and family are dead. The story is also fairly broad in that everything doesn't happen all on one planet - indeed, quite a wide range of locations is used, which in turn calls for some familiar faces to make a welcome re-appearance.

There are a couple of minor niggles though. Firstly is Rod Portlyn himself. Star Trek itself fell into the trap of the Ferengi ending up more comical than menacing, and unfortunately that's how Portlyn ends up, despite his character shift from sneaky businessman to cold-blooded killer. In fact, the whole dynamic between him and his brother comes across a lot like a more sinister Quark/Rom dynamic.

Also, I spent the first half of the story still trying to work out if there was a predictable twist coming. I won't spoil it, but will say that I was disappointed when it eventually did rear its head. This really took away from the impact some of the earlier events in the story had made, which is a shame.

The niggles are very minor though. There is an energy and pace to this story that I didn't realise had been lacking from the last few, and it was great to feel it again. A solid entry in the series and a worthy follow-up to The Art of the Deal.

Jason Wood
5.0 out of 5 stars great seller
Reviewed in the United States on 1 March 2015
Verified Purchase
great seller
Read more
Report abuse
See all reviews
Back to top
Get to Know Us
Make Money with Us
Let Us Help You
And don't forget:
© 1996-2021, Amazon.com, Inc. or its affiliates