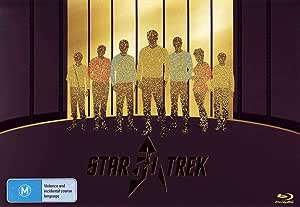 Secure transaction
Your transaction is secure
We work hard to protect your security and privacy. Our payment security system encrypts your information during transmission. We don’t share your credit card details with third-party sellers, and we don’t sell your information to others. Learn more
Details
Ships from
Amazon AU
Sold by
Amazon AU
Star Trek: 50th Anniversa... has been added to your Cart
New (3) from
$117.05 + FREE Delivery

Collection of Star Trek adventures featuring the original Enterprise crew. In 'Star Trek - The Motion Picture' (1979), the crew of the USS Enterprise, led by Captain James T. Kirk (William Shatner), are forced into action when Earth is threatened by a massive energy field. In 'Star Trek 2 - The Wrath of Khan' (1982), selectively bred supervillain Khan (Ricardo Montalban) threatens to reverse creation with his Genesis Machine. In 'Star Trek 3 - The Search for Spock' (1984), Kirk disregards Starfleet orders and steals the Enterprise to venture out on a mission to find the body of Spock (Leonard Nimoy). However, as the crew search for the fallen officer, a group of marauding Klingons take the opportunity to attack. 'Star Trek 4 - The Voyage Home' (1986) follows Kirk, Spock, McCoy (DeForest Kelley) and the crew as they travel back to the twentieth century in order to save the planet from a rogue space probe. In 'Star Trek 5 - The Final Frontier' (1989), the crew's shore leave is cut short when Spock's half-brother - Vulcan renegade Sybok (Laurence Luckinbill) - takes several important ambassadors hostage on the planet Nimbus. Finally, in 'Star Trek 6 - The Undiscovered Country' (1991), the Enterprise is sent to escort the Klingon chancellor to peace negotiations with the Federation. However, when the chancellor is assassinated, the Klingons refuse to continue negotiations unless Captain Kirk and Dr McCoy are tried for the murder in a Klingon court. Also included are all 79 episodes from series 1-3 of 'Star Trek the Original Series', which follows the crew of the Enterprise as they search out new life as part of their five year mission. In addition, all 22 episodes from the animated spin-off 'Star Trek the Animated Series' are also included.