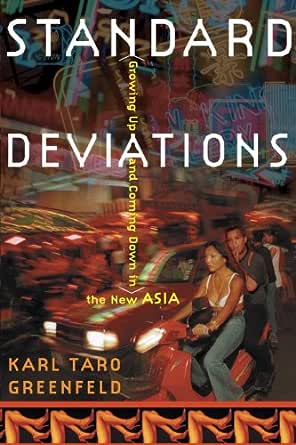 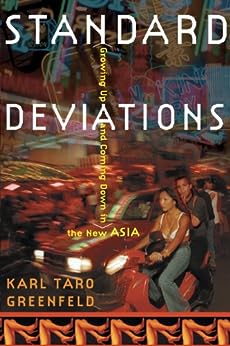 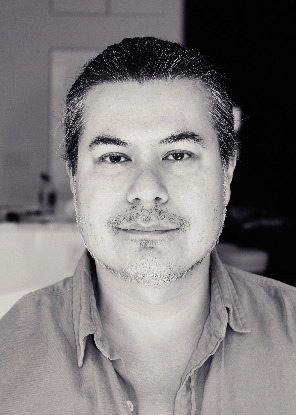 Standard Deviations: Growing Up and Coming Down in the New Asia Kindle Edition

"Indian spirituality and violence in Jakarta, Japanese bar girls and ex-models in Kathmandu, Standard Deviations has it all. Have you ever wanted to set out for alien regions on a voyage of pure hedonism, self discovery or both? Karl Taro Greenfeld has done it. I thoroughly enjoyed this book. There is a lot adventure and entertainment here and good stories along the way."
-William T. Vollmann " From Bangkok mega-slums to drug-drenched primitive resorts in the Gulf of Siam, Karl Taro Greenfeld opens one door after another into the astonishing multiverse of the New Asia. If it were simply another travel book, Standard Deviations would be a fine one, but this a life's journey, undertaken with the soul at stake. Lucid, merciless, unforgettable."
-William Gibson, author of Neuromancer

“I was twenty-three and I had set off for Asia to become a writer, intrigued by lurid tales of booms, busts, drugs, sex, violence, magic. There was a wicked sorcery in Asia, in the economic profligacy of the early nineties, in the way financiers and businessmen took a rapidly wiring and developing continent and looted billions, like a titanic parlor trick converting all that wealth into abandoned office complexes and half-completed shopping malls. . . . I wanted it all—the money, the sex, the drugs. And to this day I believe that if I am honest with myself, despite all I have learned the hard way over the past decade, I would still want it all again, the fucking and the getting loaded and the scheming to get enough money to pay for that life.”

In the late 1980s, not long out of college, Karl Taro Greenfeld found himself stranded in New York, a failed writer before his career had even begun. His Jewish-American father angrily cut off support; his Japanese mother suggested he go to Japan to teach English. He did, accepting a job with no more promise than he’d had before. But he stayed in Asia for the next several years, working his way through a series of journalistic posts, watching a culture erupt before his eyes and facing his own demons. Through a series of vividly imagistic stories that range from the rigidly journalistic to the deeply intimate, Standard Deviations recounts Greenfeld’s experiences—both professional and personal—during Asia’s wild ride at the end of the twentieth century. Whether drinking Japanese cough syrup to get high with other Western expatriates, visiting a free-sex ashram in Bombay, or watching a former high school pal self-destruct as an equity analyst in Jakarta, Greenfeld evokes the spirit of a continent in flux at an explosive “bubble” economy’s end—and a man confronting his own identity and aspirations.

Raunchy, insightful, eloquent and moving, Standard Deviations is an uncompromising work of cultural observation and self-exploration.

The later essays featured characters that were mainly caricatures, like "Naddy the Pimp", or "Dina" the hippie, or the cool Californian "Laney". Greenfield is pretty insufferable, he's not nearly as cool as he thinks he is, drug addiction doesn't really impress anyone.

Greenfield does seem like he could be a good writer. He should just recognize that adults don't care about how he was friends with the cool kids like "Laney" and "Dina", they mainly just think he's a tool for thinking that'd impress people.

I'm guessing these essays were originally used in magazines, but like I said, aside from the first one, and maybe the last one on speed in Thailand, they were all mainly unreadable. Wish I hadn't bothered buying this piece of s***
Read more
One person found this helpful
Helpful
Sending feedback...
Thank you for your feedback.
Sorry, we failed to record your vote. Please try again
Report abuse