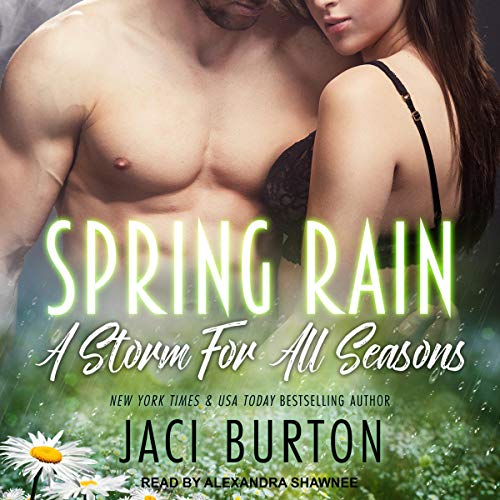 Spring Rain: A Storm for All Seasons, Book 4

Kaitlyn Storm has loved Brett McGregor since she was 17 years old, even before he pulled her into his arms and kissed her until she was breathless. But Brett pushed her away, not wanting to subject Kaitlyn to the demons inside him.

Ten years later, Brett is a widower with a dark secret he hides from everyone, especially Kaitlyn. He doesn't want her to get close, doesn't want to risk hurting her. Though he owns a prominent New Orleans art gallery, he no longer paints. Not since that black day six years ago when his wife died. And no matter how much Kaitlyn begs him, he won't paint her nude portrait, even though her lush body and sensual nature haunts his dreams at night.

But Kaitlyn won't take no for an answer. She's determined to use all her powers of magic to convince Brett to start living and loving again, even if she has to seduce him while posing nude for a painting. And in the game of seducing the man she loves, Kaitlyn is relentless.

Read more
©2005 Jaci Burton (P)2020 Tantor
Previous page
Next page
Learn more about membership
By completing your purchase, you agree to Audible’s Conditions Of Use and Privacy Notice.
Sold and delivered by Audible, an Amazon company
Share

jenartiles
5.0 out of 5 stars Brett and Kaitlyn
Reviewed in the United States on 8 November 2020
Verified Purchase
This is the final chapter of the Storm family saga. Kait has loved Brett as long as she can remember but he pulled away from her. Tragic events caused changes in him, but fear kept him away. She finally gets him to see the light and they get their HEA.
Read more
Report abuse

Kindle Customer
5.0 out of 5 stars Can love conquer the shadows?
Reviewed in the United States on 31 August 2017
Verified Purchase
Perfect blend of steamy sex and romance! The age old question- Can love conquer all? - must still be answered.
Read more
Report abuse
See all reviews
Back to top
Get to Know Us
Make Money with Us
Let Us Help You
And don't forget:
© 1996-2022, Amazon.com, Inc. or its affiliates