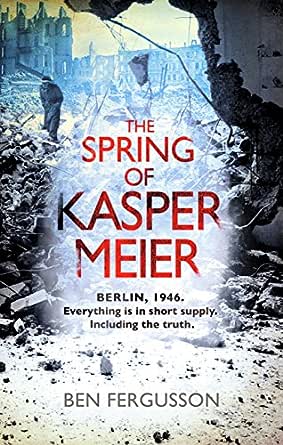 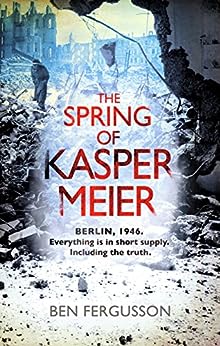 A powerful evocation of shattered lives trying to reconnect - and a heartbreaking story of the pain of compassion (Jake Arnott, bestselling author of The Long Firm)

A gripping mystery set in a surreal and terrifying post-war Berlin where nothing is quite what it seems. I loved it (William Ryan, author of The Korolev Mysteries series)

What I loved about this book were two things above all: firstly, a moment in time and place - devastated post-war Berlin - in which things were done that one knew nothing about, and were shocking. Secondly, he brought Kasper and Eva and the others' experience to pungent physical life with his sensual description of sight, sound, and above all smell. It was real on the page. A great achievement and a tremendous debut (Tim Pears, author of In The Light of Morning)

The launch of a brilliant new British talent, perfect for fans of Alone in Berlin by Hans Fallada.
See all Product description
click to open popover

David Thambiratnam
5.0 out of 5 stars Stunning!
15 July 2014 - Published on Amazon.com
Verified Purchase
I have never been so enthralled in a world I knew nothing about. Absolutely beautiful writing and I can't wait to read whatever the author writes next!
Read more
2 people found this helpful

Keris Nine
4.0 out of 5 stars Chasing demons
4 July 2014 - Published on Amazon.com
It's 1945 and someone is killing soldiers in Berlin. That might not sound terribly surprising, but the war is supposed to be over at this stage. These killings however seem to be connected to the atrocities that occurred in Berlin as Russian and allied troops arrived in the city and divided it up into French, Russian, British and American sectors, and soldiers from all those nations are being lured, ambushed and executed by an unknown killer.

What has this to do with Kasper Meier? Like most Berliners who survived the war, he keeps alive doing small favours, trading goods and information for scarce basic provisions and medical supplies on the black market. Kasper Meier knows the benefits of lying low and minding your own business, but a young woman, Eva Hirsch - a rubble girl working on one of the clearing teams of Frau Beckmann - has approached him using blackmail to obtain information on a British pilot they are looking to find. As if that's not enough leverage, Meier is also harrassed continually by Frau Beckmann's terrifying twins.

The Spring of Kasper Meier works well on a number of levels. The ruined Berlin of 1945 serves as a fine backdrop for a thriller, the military control and zones making movement and travel difficult and risky - particularly for anyone dealing in stolen and black market goods. There are however other unknown dangers, and Ben Fergusson does well to relate them to Kasper Meier's position. Considering his background and experiences, he has every reason to be wary and necessarily resourceful.

Ultimately, The Spring of Kasper Meier manages bringing the personal and the historical elements together well to tackle bigger issues of the complexities of morality and individual actions during very extreme times. In this post-war devastation it's more than just being a fight for survival or a settling of scores ('"My nephew died of pneumonia this winter. Christmas Eve. Never got to see 1946" - "He didn't miss much", said Kasper'), it's about confronting the personal demons that have been awakened and let loose in such savage times and finding a way to live with them.
Read more
3 people found this helpful

S Riaz
4.0 out of 5 stars The Spring of Kasper Meier
3 July 2014 - Published on Amazon.com
This evocative novel will catapult you in post war Berlin. It is spring, 1946, and Berlin is a city of rubble, with inhabitants on the verge of starvation and soldiers everywhere – British, American, French and, of course, Russian. Kasper Meier lives in a fifth floor apartment with his elderly father and does his best to get by. He has survived the bombings, the occupation and the animosity of his neighbours and now he spends his days trading on the black market. However, one day a young woman arrives on his doorstep. Eva Hirsch has heard that he is good at finding people and has been sent by the elusive Frau Beckmann to ask him to discover the whereabouts of a British pilot. Kasper is not keen to get involved, but he has a secret and Eva has been told to resort to blackmail...

This is a novel with a very real sense of time and place. Berlin is very much a ruined city and those still alive are half relieved and half afraid of what is to come. Rubble women work at clearing the bomb sites, while ducking out of sight if soldiers appear. The real sense of fear after the abuses of many soldiers during the occupation is apparent. Children are described almost as feral, combing the streets for food or throwing stones; exposed to such horrors that their childhood is blighted, perhaps forever. Among the best characters that haunt this book are Frau Beckmann’s twins – the sinister Hans and Lena. As well as having to discover the whereabouts of the pilot, Kasper has to deal with threats and violence. Yet, to add to the level of unease on the streets, members of the military are being killed. Afraid for himself, and for Eva, Kasper must discover what is really beneath the request he has been given.

I found this a very moving novel. Kasper is a vulnerable and yet very strong character; whose paternal feelings for Eva were realistically portrayed. The vision of post-war Berlin is one that will stay with me for a long time. This would make an ideal book for reading groups, with much to discuss. Lastly, I received a copy of this book from the publishers, via NetGalley, for review.
Read more
2 people found this helpful
Go to Amazon.com to see all 8 reviews 4.0 out of 5 stars
Get FREE delivery with Amazon Prime
Prime members enjoy FREE Delivery and exclusive access to movies, TV shows, music, Kindle e-books, Twitch Prime, and more.
> Get Started
Back to top
Get to Know Us
Make Money with Us
Let Us Help You
And don't forget:
© 1996-2020, Amazon.com, Inc. or its affiliates