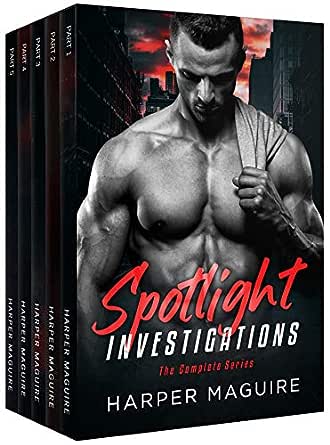 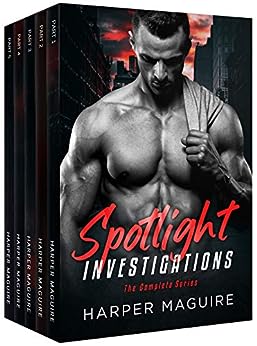 Part 1
Rachel wasn’t expecting to run into her old flame as she was waiting on tables, especially when she was the one to dump him because she thought she would go farther in life without him. But there he is, sexy as ever, sitting at her table. He’s even got a pretty impressive job; security guard to the stars. Wishing her writing career that she always dreamed of had ever taken off, Rachel concocts a plan. What if she can use some of Jayden’s insider information to write a bestselling book? She’ll only have to use him a little bit to get what she needs, what harm can there be? Except she never expected to begin to fall for him again…when she does can she still go through with her plan?

Part 2
Max is the carefree younger brother of broken hearted Reid. He tries to keep his sarcasm in check and his jokes on point. Very little could ever get in the way of his jovial mood. Except the assignment Salvatore just gave him. Max’s new long term job is to work security for a pop-up fashion boutique series, which doesn’t sound all that bad if the pop-ups weren’t being opened by the one person he can’t stand - Reid’s ex-girlfriend Hannah. As he expects the two can’t seem to get along, there’s fireworks as usual when they’re around each other as they fight. But soon those fireworks turn from fighting into passion and something that could ruin his relationship with his brother forever.

Part 3
Heartbroken after his breakup with Hannah, and confused by his brother’s new relationship with her, Reid has decided that romance isn’t in the cards. Not unless it's truly real. But does that even exist? He’s challenged by his new job from Spotlight, guarding the infamous and gorgeous Jennifer White from her wreck of an ex-boyfriend, also infamous Ian. How can Reid keep her protected from her ex when she is required to keep up appearances with Ian for publicity of their new movie? And what is he supposed to do when he believes that what he feels for her is real, but she’s too tied up with another man?

Part 4
As the only female guard at Spotlight, Ireland has her work cut out for her among the boys, but this girl can hold her own. Her newest job is to help protect child star Kelly while she’s at school as there seems to be a stalker on the loose. Until she’s safe, Ireland will be reporting to elementary school every day to watch this spunky little girl. It seems like an easy task, though reliving the memories of her childhood feels haunting, Ireland tries to stay focused. But it’s hard to stay focused when Kelly’s newly single father is just so irresistible.

Part 5
Salvatore has never recovered from the pain of his little sister’s unsolved murder when he was only a kid, and that’s why he began Spotlight to begin with. As new information comes to light for the police, her cold case is reopened, and with it all of Salvatore’s wounds. One misstep has landed him in court ordered counseling where he can’t stop fighting with his perky, perfect blonde counselor Ginny. Salvatore has a past he has to deal with and a future he needs to begin to make. If only he could stop fighting with, or kissing, his counselor, maybe he could find a way to work through his pain and see there’s more to the world.

Amazon Customer
1.0 out of 5 stars Teens
2 October 2019
Format: Kindle EditionVerified Purchase
Aimed at 18-21 year olds. If you're in that age group go for it.
, I'm sure it would appe6

island April
5.0 out of 5 stars Interesting series of stories
23 July 2019 - Published on Amazon.com
Format: Kindle EditionVerified Purchase
The emphasis is a little more on the relationships than the mystery or drama. The stories of co-workers in a security firm, build a little upon each other, but could be read as stand alone books. I enjoyed the character interactions and the way each person's point of view was shared, although ccasionally there was a little repetition. Each storyline was unique with people from all walks of life.
I don't like to give away any of the storylines, but the last story involving the security company owner and the councilor was probably my favorite. I was dreading it a little bit, knowing his little sister was killed, and the murderer was taunting him with letters every year. Then finding out the counselor's own traumatic upbringing, felt like a little too much. But, it was thoughtfully written and a great reminder as to how resilient we can be.

Janine M. Randall
1.0 out of 5 stars Confusion over book descriptions
3 July 2019 - Published on Amazon.com
Format: Kindle Edition
I haven't read these books yet, but I am going to purchase the set. However, I'm really confused about the descriptions for the books involving Max and Reid. Max is guarding the one woman he can't stand-Reid's ex-girlfriend Jennifer. Then the description for Reid says he's broken hearted over his break up with Hannah and doesn't understand his brother's relationship with her, but his new job is protecting movie star Jennifer. Who is dating who? I hope it becomes clearer when I start reading. I know this is an unusual "review", but it was a really bad book blurb.
Read more
2 people found this helpful

Joy S
1.0 out of 5 stars Stupid
2 January 2020 - Published on Amazon.com
Format: Kindle Edition
Almost stopped reading after she first decided to use him after she had already dumped him years ago. Then she started to change her mind but then she decided to use him again. Her justification was he was no longer working the case BUT he cared about the person and the person was in a coma and she was going to use him. The way they acted was like teenagers not someone pushing 30. The only nice thing I could say is there wasn't pages and pages of detailed sex and the F word., but I stopped reading so it could have turned into that.
Read more
Go to Amazon.com to see all 11 reviews 3.9 out of 5 stars
Get FREE delivery with Amazon Prime
Prime members enjoy FREE Delivery and exclusive access to movies, TV shows, music, Kindle e-books, Twitch Prime, and more.
> Get Started
Back to top
Get to Know Us
Make Money with Us
Let Us Help You
And don't forget:
© 1996-2020, Amazon.com, Inc. or its affiliates