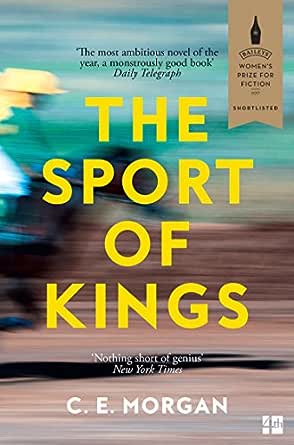 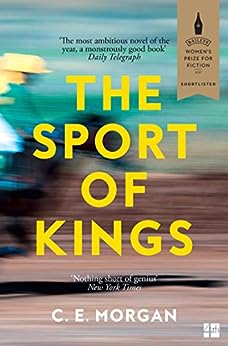 The Sport of Kings: Shortlisted for the Baileys Women’s Prize for Fiction 2017 Kindle Edition

‘CE Morgan has delivered a masterpiece. Rich, deep, and ambitious, this book is, by any standard, a Great American Novel’ Philipp Meyer, author of The Son and American Rust

‘In this century, the finest “major” novels have more often than not been written by women. Zadie Smith, Donna Tartt, Eleanor Catton, Meg Wolitzer and Elena Ferrante are among those hitting the long balls in contemporary fiction, and with The Sport of Kings, a world-encompassing colossus second novel, C. E. Morgan has joined their ranks … Morgan is a virtuoso stylist …There will not be a novel with a larger and more dazzlingly deployed vocabulary published this year … Constantly invigorating, surprising and transfixing’ TLS

‘Fich and compulsive … This epic feat of storytelling confirms Morgan as the new torchbearer of the Southern Gothic tradition … She is such an immersive storyteller, with such a vivid sense of place, such a true ear for dialogue, and so subtle a gift of characterisation … Her prose is often ravishingly beautiful, displaying an unerring instinct for metaphor and music … By the time I was 100 pages in, my English cynicism at the spectacle of another author setting out to write the Great American Novel had dissolved into wonder and delight: C.E. Morgan has come close to realising that very thing’ Financial Times

‘There were moments while reading this sprawling, ambitious novel when I thought I was reading a masterpiece … At times my compulsion to read on was like a physical force’ Spectator


‘You and I are family. Blood and treasure. Listen to me, I created this world with my own two hands, and I am going to leave it all to you’

Hellsmouth, an indomitable thoroughbred filly, runs for the glory of the Forge family, one of Kentucky’s oldest and most powerful dynasties. Henry Forge has partnered with his daughter, Henrietta, in an endeavour of raw obsession: to breed the next superhorse. But when Allmon Shaughnessy, an ambitious young black man, comes to work on their farm after a stint in prison, the violence of the Forges’ history and the exigencies of appetite are brought starkly into view. Entangled by fear, prejudice, and lust, the three tether their personal dreams of glory to the speed and grace of Hellsmouth.

A spiralling tale of wealth and poverty, racism and rage, The Sport of Kings is an unflinching portrait of lives cast in shadow by the enduring legacy of slavery. A vital new voice, C. E. Morgan has given life to a tale as mythic and fraught as the South itself – a moral epic for our time.

adel
4.0 out of 5 stars Tripple Crown
7 March 2017 - Published on Amazon.com
Verified Purchase
Be prepared to wade through centuries and generations before going off to the races. The priority here is historical perspective and blood ties. The first horse appears after a long backstory about the arrival of settlers and slaves, the history of the family farm and the first half of the protagonist’s life. Though the character’s obsession is breeding the perfect horse, the thoroughbreds act as a metaphor to support larger themes of heredity, from ancestors to legacy, both social and genetic. However, the writer wields a glorious pen, weaving ribbons of prose into descriptive rainbows. I am from these parts and can testify to the eyeopening grasp of the territory and the facts. Morgan nailed descriptions of the rolling blue grass hills blanketed by morning mist, the public school option for a child in a Cincinnati slum and the anatomy of the horses. If the book avoids the glamorous side of the big old horse farms or the seedy elements of the track or the criminal aspect stalking the edge of the tale's peripheral vision, its because the author gives the distinct impression that he has seen too much. Combining Southern Gothic with modern revisionist insight, the most dynamic chapters concern the journeys of slaves across the Ohio river and how generations later they dealt with the disappointment of the promised land turning into a poverty trap. The rich characters seem trapped by the interplay of DNA and environment as if the poison in their relationships passes down through the blood for generations with no antidote. Mixing these characters, rich/poor, black/white is a recipe for tension. Unfortunately, many lack dimension, like oars paddling the boat down stream, they never separate from their circumstances. They also seem to avoid speech. In rare conversations, words are rationed and often cryptic or just curt. Late in the novel a character turns up with a mouth and his colorful dialogue is music to the ear. One character is a cipher, until her death reveals a hidden internal life preserved in the words of her journal. Another character stays practically silent though he acts as a catalyst. When it all goes up in flames, the drama, for all its inevitability, seems hollow. The redeeming factor is the horse, the fantastic creature that embodies human hopes and aspirations for perfection. The attention the author lavishes upon descriptive passages of the thoroughbreds in the gate, in the race, in the field and the stable leaves the worship of grooms, jockey’s, fans and owners in the dust. This literary achievement is sad and haunting and unforgettable. By scientifically breeding these horses to risk life and limb for speed pushing the edge of what is physically possible, there is no escaping the inhumane fact that these races often end tragically. The Sport of Kings is about ambitions; the interplay of DNA and the environment in the breeding of ambitions, where the ambitions lead and the damage done by the lethal combination of ambition and inheritance.
Read more
12 people found this helpful

simonetta
5.0 out of 5 stars Don't miss this one!
16 October 2016 - Published on Amazon.com
Verified Purchase
I rarely choose to buy a book any more. I usually rely on the library, but after reading this twice, I decided I had to own it. It has everything I love - great writing, excellent character development, and some great horses, too. If you think of this as a "horse story" however, you'll be missing a superb read. I can say you probably won't like the main characters, but you'll appreciate them. I'll be proud to have this on my bookshelves. I started reading it a third time, and wound up loaning it to a friend. Read it once for the characters, once for the history, and once for the fascinating telling of the Forge dynasty.
Read more
10 people found this helpful

D. Fisher
5.0 out of 5 stars Magical, masterfully written, and thought provoking on many levels.
29 August 2016 - Published on Amazon.com
Verified Purchase
I awoke this morning with vivid dreams lingering of a raging fire, a tumultuous river black as midnight, and, most assuredly, a powerful race horse. Having stayed up extra late last night to finish, The Sport of Kings, which I've taken my time to digest over the last couple of months, I can say the experience of reading CE Morgan's latest masterpiece was very similar to the experience of traversing Cormac McCarthy's The Road and Neil Gaiman's American Gods. Expansive, brilliant, original and boundary pushing. Each story changed how I view the world and my expectations for new stories. I don't tend to be a loyal reader, frankly. If I'm going to take the time to read something, it has to be a magical experience in some way. The Sport of Kings certainly was that for me.

When I read Morgan's first book, All the Living, when it came out a few years ago, I could anticipate her latest book simply because Ms Morgan's powers of narrative were far larger than what we saw in that first story. Like Michael Phelps casually hanging out in a wading pool or, more to the point, a race horse pacing about in a barn, she had so much more to say. She's certainly hit her stride full out with this second novel. As with The Road and American Gods, I certainly will becoming back to re-read The Sport of Kings fairly regularly.

As with any book, I do have a few minor quibbles. For example, while I realize Allmon keeps way too much of his spirit stuffed inside, at the point of the last interchange between Allmon and Reuben, I felt that scene lacked the intensity of feeling needed to keep the story moving steadily into the final portions of the novel. I wanted that interchange to be the peak of their interactions and yet it felt too one-sided, almost all Reuben. It's pretty minor. In a neighboring passage, Ms Morgan's timing of when to describe Allmon's incarceration is simply brilliant.

I cannot wait to see what CE Morgan has up her sleeves for her next novel.
Read more
7 people found this helpful

Mystery2Me
5.0 out of 5 stars Serious Novel About Horses and Race
24 May 2016 - Published on Amazon.com
Verified Purchase
Sure to be one of my favorite new novels of the year. It's ostensibly about the white and black lives involved in producing a champion racehorse. Not flawless by any means -- but the author is audaciously talented. Yes, the prose can frequently take on a purple hue, and the plot offers generous portions of melodrama. Still, I was enthralled by insanely compelling, incantatory passages with common words put to surprisingly poetic use. This reader is ready to follow C.E. Morgan anywhere.
Read more
6 people found this helpful

Richard A. Rose
1.0 out of 5 stars BELIEVE EVERY WORD OF EVERY BAD REVIEW
4 July 2019 - Published on Amazon.com
Verified Purchase
There are plenty of bad reviews to read; they are all accurate. I really can't say enough negative things about this book. The idea that it was nominated for a Pulitzer is shocking and disturbing. It's a rambling shambles of "hot button" topics addressed with cliches and gratuitous violence. Shame on The New York Times Book Review for giving it a good review.
Read more
One person found this helpful
Go to Amazon.com to see all 173 reviews 3.4 out of 5 stars
Get FREE delivery with Amazon Prime
Prime members enjoy FREE Delivery and exclusive access to movies, TV shows, music, Kindle e-books, Twitch Prime, and more.
> Get Started
Back to top
Get to Know Us
Make Money with Us
Let Us Help You
And don't forget:
© 1996-2020, Amazon.com, Inc. or its affiliates