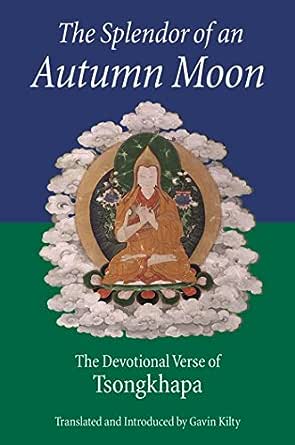 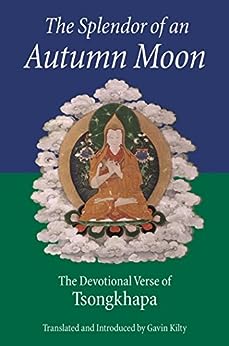 The Splendor of an Autumn Moon: The Devotional Verse of Tsongkhapa Kindle Edition

“Some of the most inspiring verses ever written.”—Geshe Thupten Jinpa, PhD, founder, Institute for Tibetan Classics

The Tibetan saint Tsongkhapa (1357-1419), the founder of the Dalai Lama's tradition of Tibetan Buddhism, was renowned for his vast learning, meditational achievements, influential writings on practice and philosophy, and reform of tantric religious practices. A deeply humble and religious man, he expressed himself in exquisite verse.

Here, presented in both the original Tibetan and in English translation, are twenty-one devotional poems by Tsongkhapa. Each verse--dedicated to the Buddha, bodhisattvas, and lamas--illuminates some aspect of the Buddhist path. Gavin Kilty's commentary places each prayer into context, and his careful, artful translations will appeal to anyone with a love of poetry.

Gavin Kilty has worked as a translator and teacher of the Tibetan language since 1970. He teaches Tibetan and English, as well as Mahayana Buddhism, at various colleges in England.
click to open popover

Steve Rogers
5.0 out of 5 stars Tsongkhapa as disciple
Reviewed in the United Kingdom on 14 June 2004
Verified Purchase
These poems present the great teacher Tsongkhapa in an unusual light, overflowing with gratitude to Buddha Shakyamuni, Manjushri, Amitayus, Amitabha, Je Rendapa and others for helping him. The praise to Manjushri in particular is a deeply felt love poem, ecstatically lingering on every detail of the Buddha's body right down to the eyelashes.
Lotsawa Gavin Kilty's translation is excellent, allowing the inspiration and feeling to shine through clearly and preserving this poetry as poetry rather than as dry translation.