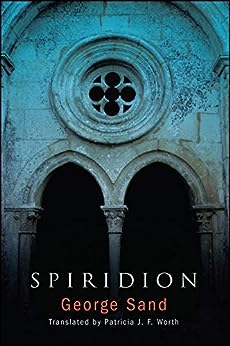 This is an excellent translation of a tale of the supernatural by a major French author. With her searing critique of Catholicism and its labyrinthine structures, Sand in Spiridion deconstructs her culture in a way similar to what Mary Shelley has done in Frankenstein. Both works are effective as horror stories, but both can also sustain serious academic inquiry, yielding still deeper rewards. Beyond academe, serious students of religion will also find that Spiridion's subject matter raises provocative theological questions. -- Lynn Hoggard, translator of Nelida by Marie d'Agoult --This text refers to the paperback edition.

Patricia J. F. Worth is a French-English translator and private tutor of English and French. She received her master of translation studies from the Australian National University, Canberra, where she focused on nineteenth-century French literature and recent New Caledonian literature. --This text refers to the paperback edition.

Steven Fletcher
5.0 out of 5 stars Welcome Back, Spiridion
Reviewed in the United States on 4 June 2015
Verified Purchase
I feel that someone needs to point out what an important publishing event this English translation of George Sand’s Spiridion (1839) constitutes. According to translator Patricia J. Worth, the only previous English copy of the novel was a very old and virtually unobtainable edition. Her rendering of Sand’s “Gothic philosophical novel,” as she describes it, into clear and flowing modern prose is thus a gift for anyone willing and able to take advantage of it. Although not an easy read, and presumably only for those deeply interested in matters of spirituality and human psychology, the work, set completely in a Catholic monastery (and thus portraying absolutely no women characters), offers great challenges and rewards for believers and non-believers alike (a needful disclaimer—I am an agnostic who nevertheless has often found inspiration in the sacred texts and great teachers of all faiths).

I came to Spiridion by way of Dostoevsky; in Joseph Frank’s definitive biography of him Frank points out that the main characters in Sand’s novel—a dying monk and the young novice who attends him--prefigure in many details the relationship between the dying elder Zosima and his disciple, the young Alyosha in The Brothers Karamazov. Dostoevsky noted the great influence of Sand’s novel upon him, saying that “there was no thinker or writer of France of her time who understood with such force that man shall not live by bread alone.” Sand’s work is a long, highly detailed--almost minute by minute--examination of all the trials of faith and puzzles of the mind encountered during the life of the dying Father Alexis: he struggled in turn with theological heresies, the experience of doubt, the promptings of the flesh, and the philosophical currents of the age. This reader was very often in awe at the perceptiveness of Sand’s depiction of this intense inner struggle, often wondering how someone who hadn’t herself spent an entire lifetime similarly engaged could evoke such psychological verisimilitude—each new realization proceeds logically and organically, both in respect to the inner life of the old monk, and in respect to the narrative itself.

At one point Father Alexis says to his novice, speaking of his past struggles with the corruption of the Church and also his own seasons of doubt brought about by his secular studies: “I had ceased to be a Catholic; reading the philosophers, I ceased to be a Christian. I kept as my whole religion a belief full of desire and hope in the Divinity, the unshakeable feeling of the just and the unjust, a great respect for all religions and all philosophies, a love for goodness and a need for truth. Perhaps I could have stayed with that and lived peacefully enough with these great instincts and with much humility, but there perhaps you have something impossible for a Catholic, there perhaps is where the story of an individual differs essentially from the story of generations. The work of the centuries modifies the nature of the human spirit: with time, it manages to transform it. Fathers are slow to cast off their errors and yet they pass on to their children much clearer notions than they had themselves, because they remain until the end of their days stifled by habit and tied to the past by spiritual needs the past created for them; while their children, being born with other needs, quickly develop other habits which, toward the waning of their life, will not prevent new glimmers stealing in but will be clearly grasped only by a third generation.” Here in this passage we see the internal battles of the monk along with his perception that each generation is unique, bearing the seeds of the past into a future that only becomes clear upon arrival. This fits with the Gothic trappings of the story, which involve a hidden manuscript of prophetic wisdom which, like the Grail itself, can only be unearthed by one who is worthy, who has been purified by suffering all the trials mortal flesh is heir to—and is thus able to appreciate and safely transmit perilous but necessary truths.

The novel is in part a critique of the Catholic Church (Sand had left it almost a decade earlier, but never stopped being a spiritual seeker), in part a gothic suspense tale, and in part the story of a soul’s passionate search for authenticity and meaning. This last component is what makes this novel a timeless classic, a work lauded by such authors as Thackery and Henry James, and what makes its new appearance among us a cause for celebration.

Years after its composition Sand wrote of Spiridion: “It is not the easiest thing in the world to give the conclusion of one’s religious beliefs.” It is not surprising to learn that she was actually living in a monk’s cell at the Royal Carthusian Monastery of Valdemossa in Majorca when she finished the novel; neither is it surprising to learn that while she was writing Spiridion, her husband Frederic Chopin was composing his heavenly Etudes in the same cell--there is music of the spheres to be discovered in them both.
Read more
10 people found this helpful
Report abuse
See all reviews
Back to top
Get to Know Us
Make Money with Us
Let Us Help You
And don't forget:
© 1996-2021, Amazon.com, Inc. or its affiliates