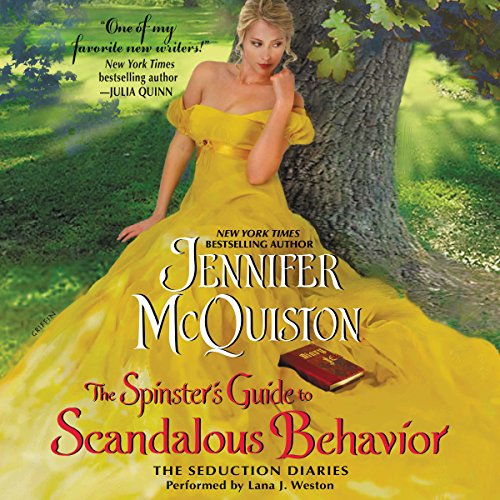 The Spinster's Guide to Scandalous Behavior: The Seduction Diaries, Book 2

4.1 out of 5 stars
4.1 out of 5
39 global ratings
How are ratings calculated?
To calculate the overall star rating and percentage breakdown by star, we don’t use a simple average. Instead, our system considers things like how recent a review is and if the reviewer bought the item on Amazon. It also analyses reviews to verify trustworthiness.

Belinda
5.0 out of 5 stars Loved it
Reviewed in the United Kingdom on 13 April 2016
Verified Purchase
Very good read. Too strong characters who fall in love. Thomas has his daemons and with Lucy's help overcomes them . Look forward to the next book.
Read more
Report abuse

S. Atkinson
5.0 out of 5 stars Five Stars
Reviewed in the United Kingdom on 5 May 2016
Verified Purchase
Another good read from this author
Read more
Report abuse

Boss
1.0 out of 5 stars Regret the time & money wasted on this book
Reviewed in the United States on 25 March 2016
Verified Purchase
After reading the effusive reviews on how wonderful this book was, I am asking myself if I live in an alternative universe. This novel was written as though it was a screenplay for a cheesy faux-historical romance/comedy on the Hallmark channel. The dialogue and characters would be more realistic, and more enjoyable, if this was set in present day America. The language, the mannerisms and the attitudes of the EVERY person depicted in the novel (up to page 107, where I finally ended the agony) is right out of 2016. There is NOTHING about this book that qualifies it as a historical romance.
The final head-banging, make-me-go-crazy dialioge between the TSL (too stupid to live) Lucy Westmore and the reformed rogue Lord Thomas Branston. The salacious conversation took place on a crowd train, 3rd class section, with a new mother & babe on one side of the couple and an older, leering man on the other. While they are squished between these passengers, who apparently can't hear, or don't care what they are saying, Lord Branston resorts to spouting lewd poetry in an effort to pique the interest of TSL Lucy. This is the line that finally caused me to chuck the book across the room : "and she had a lovely fine set of titties!" Of course, dear Lucy "gasped!" And Lord Branson continued "They are. I mean you do.", gesturing to her bosom. Ugh, ugh, ugh....no outrage from,all the other passengers packed like sardines around them, no outrage from stupid Lucy....
I could go on and on with more examples of the romp-style idiotic dialioge and plot of this book, but it would be a waste of both your time and mine.
If you still feel a burning desire to read this book, consider yourself warned.
What puzzles me is that Jennifer's first 3 books were so fun to read. Each one since then has gotten progressively worse. Read the first 3 and skip the rest.
Read more
45 people found this helpful
Report abuse

OLT
3.0 out of 5 stars Rather more ordinary (and more exasperating) than I'd expected.
Reviewed in the United States on 29 November 2015
Verified Purchase
I enjoyed the first novel in this series so much (DIARY OF AN ACCIDENTAL WALLFLOWER) that this second one has suffered by comparison. This one is about Lucy Westmore, the younger sister of Clare, heroine of the first book. Lucy, it seems, doesn't want to marry and has decided she'd rather be a spinster than an unhappy wife. When her spinster aunt E dies and leaves her cottage in Cornwall to Lucy, not to mention also all her diaries (hence the title of this book), Lucy has a rethink about her life in London.

Meanwhile, there's a certain Lord Branston who seems rather desperate to purchase Lucy's new property. Why? So Lucy's off to Cornwall (w/o parental knowledge or consent) to see what's what.

Lucy is impulsive, spirited, hoydenish, stubborn and, IMO, a big pain in the patootie, especially in her dealings with the hero Thomas, Lord Branston. When she gets an idea in her head she runs with it, with very little rational thought behind any of her decisions. I lost patience with her countless times and could not fathom why the hero falls so in love with her and has such endless patience. He obviously sees more in her than I ever did.

The hero, BTW, is far superior to the heroine. He's a kind, sensitive soul. Unfortunately, he also has some things about him I didn't quite get. He has a somewhat messy past in that he spent his early years after inheriting his title in an alcoholic haze. The reason for this drinking problem was not clear, but because of his reckless, immature life choices, he didn't pay enough attention to his younger sister, with rather tragic results. And that, of course, led to more drinking and more navel gazing and then to his self-exile in Cornwall.

When Lucy arrives in Cornwall, she finds herself in a small village that's in economic straits, full of quirky characters, many poor and superstitious, and none willing to take her to her aunt's cottage located far from town. There's a bit of a subplot about why the former fishing town is having such woes, why the neighboring town is so prosperous, why sensitive soul Thomas wants to own Lucy's inherited property. And there's the spinster issue, with Lucy reading her aunt's diary while hanging around in Cornwall.

Will Lucy gain any insights into what life as a spinster entails? Will we learn more about our hero's past woes? Will Lucy stop, for once, being such an impulsive knee-jerker and see Thomas for what he is? Can the town be brought back to economic solvency? Will both Lucy and Thomas become more reconciled to things in their past and their relationships with family members? (Hint: This is a romance novel.)

There's an interesting industry vs environment issue running through this. This and Thomas's part in it are perhaps the best thing about this book. The worst thing about the story is the heroine. I hope she finally grows up and gets a clue about proper behavior. Thomas deserves better than Lucy. But, hey, it's not for me to say. He loves her.
Read more
20 people found this helpful
Report abuse

Élodie Nicoli
4.0 out of 5 stars When pride can cost everything
Reviewed in the United States on 7 April 2019
Verified Purchase
I do not like to give up on a book, the heroine had me on edge for most of the book, but I so wanted to see how it will turn out for her.
Is it the author’s talent to create such an upsetting character m, but it worked.
I was angry at her for being too stubborn to listen nor give some thoughts before taking matter in hands.
The parallel with her aunt’s diary were so flagrant, I was kicking over the traces of her idiocy and impossibility to see past her nose.
I hoped she would see beyond the appearances, and give Thomas a chance.
But she kept rejecting him, refusing his help.
Yes, he has flaws and some secrets but his reasons were not dictated by greed, more to find an alternai solution.
After when I think of the story, it was set during a short span of time, so Lucy were not able to understand everything is a so short period, why she acted so dumbly at some point, thinking like the spoiled lady she is and not realizing her project to live alone has some defects.
Hopefully the last quarter of the book redeemed the heroine as she made her mission to right some wrongs around her and save her hero.
Read more
2 people found this helpful
Report abuse
See all reviews
Back to top
Get to Know Us
Make Money with Us
Let Us Help You
And don't forget:
© 1996-2021, Amazon.com, Inc. or its affiliates