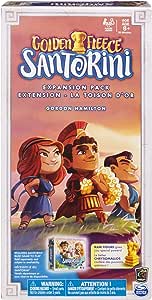 by Spin Master Games
4.7 out of 5 stars 72 ratings
Available from these sellers.

Harness The Power of the Gods

Bernardus S.
5.0 out of 5 stars Long overdue expansion that should have included in the base game from spin master.
Reviewed in Australia on 5 July 2019
Verified Purchase
Love the ocean board and added complexities to this mathy game. Expect to evolve your thinking as you play around with new gods and heroes combo.
Read more
Helpful
Comment Report abuse
See all reviews from Australia

Amazon Customer
5.0 out of 5 stars As shown
Reviewed in Canada on 2 March 2019
Verified Purchase
As shown
Read more
Helpful
Sending feedback...
Thank you for your feedback.
Sorry, we failed to record your vote. Please try again
Report abuse

Alex
5.0 out of 5 stars Excellent seller and product thank you!!
Reviewed in Canada on 22 March 2019
Verified Purchase
base game expansion
Read more
Helpful
Sending feedback...
Thank you for your feedback.
Sorry, we failed to record your vote. Please try again
Report abuse

NBC
2.0 out of 5 stars Extremely Disappointing Quality
Reviewed in the United States on 13 March 2019
Verified Purchase
I love Santorini. It is a beautiful, fun, quality game. So when I saw the Golden Fleece expansion pack, I immediately purchased it. The quality on this pack is beyond disappointing for me. Except for the workers/Golden Fleece, it’s all cardboard, and I have yet to be able to cleanly tear out one piece, because the perforations are awful. The actual design has partially torn off on each one. Considering that this pack cost only $2 less than the original game, I expected the god tokens at least to be plastic. These pieces (what’s left of them) will likely not last long, plus they’re smaller than you’d think they would be. In addition, the box is worthless, because none of the pieces seem to fit well in the wells that should be designed to hold the pieces. The instructions are not at all helpful regarding proper storage. So for now, all the pieces are randomly mixed up and flying all over the inside of the box. The outside box is actually the same good quality as the Santorini game box, which is unfortunate, because the inside of the box isn’t functional, and I was planning on recycling the whole thing. Even the ocean board is disappointing, because the colors seem faded in comparison to the ocean boards in the online videos. I’m giving this 2 stars, because I love the game, and this adds an extra level of complexity, but I would never buy this again.
Read more
6 people found this helpful
Helpful
Sending feedback...
Thank you for your feedback.
Sorry, we failed to record your vote. Please try again
Report abuse
Load more international reviews

Gregg Re
5.0 out of 5 stars Adds ocean board, lots of depth (pun intended thhhank you)
Reviewed in the United States on 29 November 2018
Verified Purchase
The expansion adds in the little ocean board that makes the game look a bit niftier. Also added are a few new Gods and Heroes -- which are effectively gods who can activate their powers only once, which is ideal if two players have unequal skill, or if you want each player to have one high-stakes opportunity to use a god power. The Golden Fleece game mode, of course, is the main addition, and it adds another key consideration -- in game with the Golden Fleece, there is only one god power, and players can only use it on any particular turn if they start that turn with a builder adjacent to the Fleece. (In normal Santorini games, players either have no god powers at all, or each player drafts 1 that takes effect all game.)

Some of the new gods are a little involved, especially Hecate, who has a miniature version of the game map (and a shield to hide it from opponents) and moves the workers on that map as if it were the game board. BUT Hecate builds on the game board as normal. At any point, if an opponent attempts an action that would be illegal because of the secret workers, their action is cancelled and they lose their whole turn. This introduced a bit of bluffing and deduction into the game, but I felt it was a little too Battleship-esque and resulted in a bit too much chaos and frustration. BUT -- some people I've played with absolutely love Heccate. One person even compared it to Cosmic Encounter, in that it totally changes the game for one player in a fun and zany way, and it's fun if you're up for some chaos. The great thing about Santorini, is there are so many god combinations that if you don't like one style, you can simply not play with it!

The Heroes, which again are one-use only, are good to give to more advanced players so that they have to budget their god power. Achilles can have his worker build both before and after moving, just one time per game. Heracles can have both his workers build any number of domes -- even zero -- at any level, again just once per game. Odysseus can force to an unoccupied corner space any number of the opponent workers that neighbor his workers. I generally don't play with Heroes, but they can work well with a big skill imbalance between players, or add some more decisionmaking as to when you can use a god power when not playing with the Golden Fleece expansion.

The game clearly indicates which gods can be used in the Golden Fleece mode, which is my preferred mode of play. If there's any real downside to this game -- which also applied to the original -- it's that planning out your moves can be tricky and brain-burning. You might want to introduce an hourglass timer to keep things moving and prevent someone from mapping it all out, but I've found in casual games people generally keep things moving quickly. The light-hearted theme and great-looking components help so much with this.

In conclusion: The best god is the Minotaur, who can push other workers out of the way. No debating this one! Poseidon is overpowered -- just too strong there I think. The rest seem great.
Read more

william peteresen
5.0 out of 5 stars Brilliant Add-On!
Reviewed in the United States on 22 October 2018
Verified Purchase
Santorini-Golden Fleece is an excellent expansion to the base game. Fleece adds more gods and heroes that increase the variety of the game by 10x fold! The replayability of Santorini with this expansion is simply incredible! However, I must admit, that it seems some gods/hero powers are clearly better then others. So balance might change from game to game. Almost as a after though, Fleece It also adds a pretty cardboard base that can be use d to surround the board and increase the visual quality of the game! Not needed, but a nice addition nonetheless!

If you're a fan of Santorini, this is a no-brainer and a must buy!
Read more
One person found this helpful
Helpful
Sending feedback...
Thank you for your feedback.
Sorry, we failed to record your vote. Please try again
Report abuse

Lisa A. Hawkins
5.0 out of 5 stars Super fun expansion pack
Reviewed in the United States on 17 November 2019
Verified Purchase
We LOVE the expansion pack! This is a great way to expand on the original game. Lots of new twists, which really extends the life of the game. If you love Santorini, you will love the expansion.
Read more
One person found this helpful
Helpful
Sending feedback...
Thank you for your feedback.
Sorry, we failed to record your vote. Please try again
Report abuse

SOULYLIGHT
5.0 out of 5 stars very excited
Reviewed in the United States on 2 November 2018
Verified Purchase
my fiancé and I love the original and play tons, once we saw golden fleece was available (was out of print) again we immediately ordered, came in two days. beautiful packaging, phenomenal artwork, love the new powers and the addition of the heroes and new play style. we haven't played yet but looking forward!
Read more
One person found this helpful
Helpful
Sending feedback...
Thank you for your feedback.
Sorry, we failed to record your vote. Please try again
Report abuse

Krista
5.0 out of 5 stars Great expansion pack
Reviewed in the United States on 12 January 2019
Verified Purchase
I love this game and the expansion pack. It comes with more workers, god cards, new parts, an ocean board that goes around the base game board and the Golden Fleece mover. I highly recommend this game to anyone. It is very much so a strategy game. It can be a 2-4 player game, but I think its best done as a 2 player game.
Read more
Helpful
Sending feedback...
Thank you for your feedback.
Sorry, we failed to record your vote. Please try again
Report abuse