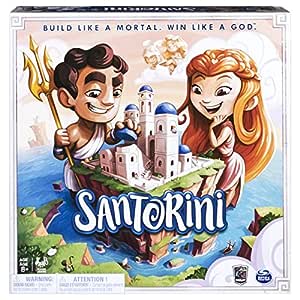 Do you have what it takes to join the pantheon of winners? Build like a mortal and win like a God in the game of Santorini! Created by mathematician and educator Gordon Hamilton, this pure strategy game requires players to sharpen their wits! Everyone can gather around Santorini and face-off in a build-to-the-finish.

What's in the box?

Dad of Two
4.0 out of 5 stars Really nicely done and a fun game
23 April 2019
Verified Purchase
Kids enjoy playing it and it’s not too complicated to learn. Really nice design and the big building pieces make it fun for the kids. Haven’t used the god cards yet, as that would complicate it too much for young kids but also means that there are variations that will keep it interesting later on.
Read more
Helpful
Comment Report abuse

Michael
5.0 out of 5 stars Fun game to play
25 January 2019
Verified Purchase
Great game and easy to play. God powers make it possible to scale up or down complexity for player experience or age.
Read more
Helpful
Comment Report abuse
There are 2 customer reviews and 3 customer ratings.
See all 2 customer reviews
Write a customer review

Super2019
5.0 out of 5 stars I'm trying to reduce my collection of 250+ games, but I cannot when I MUST add this great game
26 September 2017 - Published on Amazon.com
Vine Customer Review of Free Product( What's this? )
This is an abstract strategy game which reminded me in some ways of Gobblet; in as much as it has that abstract strategy feel and a 3D feel...sort of. In reality, we like this one a lot better.

THEME:
> Since this is an abstract strategy game, the theme could have been anything, even the Greek gods that were selected.
+ At the same time, the abilities of the gods in some cases are tied to the god's characteristics (Hermes can move fast), which adds a nice flavor to the game.

COMPONENTS:
+ The board is nice and thick.
+ The base turns the board into an island, which is what Santorini is, an island.
+ The figures are a solid plastic
+ The buildings though light, yet still a solid plastic and should not break with normal use.
> One recommendation is that level 1 and level 2 are often mixed up as players grab for the wrong pile, since the pieces look nearly identical when lying in multiple angles on the table. But if the levels were color coded that doesn't help color blind people, nor keep with the theme where all walls on a building are white-washed. Also, because everything is the same color it is easy for your eye to miss that winning spot and you miss out on winning or miss out on blocking the win. Thus the single color though frustrating could mean a lucky win because things can get missed.
> The cards are over-sized which is fine.
+ The cards have great artwork.
-- The cards are a bit on the thin side. I didn't like handling them much because they don't feel like they are up to normal standards to me. But I can overlook this as you don't have to handle the card much during each game session.

OTHER:
+ The 3D aspect is great and forces you to turn the board around to get a different perspective and hopefully find a new strategy to whatever situation you are in.
+ Each game or round, plays very fast. Our longest was 15-minutes and we played 10-games straight. Then again my son and I don't get analysis paralysis, so we aren't taking forever on our turn.

TIP: If you play with a person who gets analysis paralysis grab the sand timer out of your Pictonary game you no longer play and use that to control how long each player gets; or use a timer on your phone.

STRATEGY/LUCK:
This is all strategy, no luck.
Most of the game revolves around knowing when to or not to leverage your god's power.
And/or baiting your opponent so you block them in somewhere.
And/or making a wall by occupying spaces, so you can work on getting to Level 3, forcing the opponent to take a long way around and hopefully be too late to block.
The only luck is in not missing an opportunity to win or block a win, since the buildings are all white from level 1, 2 and 3.

The part I like best is how each god has a unique ability and requires a very different strategy to use the ability to win and/or block.

OVERALL:
Even the instructions say multiple times this is a 2-player game. Yes there are rules for 3 or 4 player, but it plays best as a 2-player.
Yes 8+ can play this.
The visuals and power variety make for a wonderful abstract strategy game.

sidenote: Coincidently out of our first 15 games, whoever went 1st won 13 times.
We are still testing this, because it doesn't feel like the 1st player has an advantage; it really is only coincidental.
Read more

FCCDAD
5.0 out of 5 stars Great for everyone, from children to serious strategic gamers.
9 January 2018 - Published on Amazon.com
Verified Purchase
I got this game for, and play it with, my 6 and 7 year old daughters. That's about the lower limit of ages to play it.

There are two levels of play: basic rules and god powers. The basic rules alone would have been a great strategy game, the god powers add lots of variety; each god basically has a particular rule exception or bonus (movement, building, victory condition) variation from the basic rules, so you end up with hundreds and hundreds of possible matchups.

The basic game is each player has two workers. Each turn you move one worker to any adjacent square (including diagonal) that is not occupied, not capped off, and not more than one level higher than her starting square; and then build in any square adjacent to the square she moved to. You can only build a level 1 block on an empty square, a level 2 block on a level 1 block, a level 3 block on a level 2 block, and you can cap off a level 3 block. To win, you must move one of your workers to a level three block on your turn (some god powers might have put you at level 3 in your build or on another player's turn; that is not a winning condition), or prevent your opponent from having any legal moves.

Mechanically, the game is elegant. The rules are simple enough for a child to understand, the board is a simple 5x5 grid, the pieces you build with are simply three decreasing sizes of blocks, and caps. Yet it can be almost chess-like in depth.

Components are very nice. There is an "island" base under the board which adds atmosphere but has no function during play. The building pieces are easily distinguished white and blue plastic and make a very attractive looking city. The players' worker figures (there are one male and one female, in blue/beige/grey for up to three players), are cute; you could paint them if you're good at that, but it's not necessary. The god power cards are large and thick cardboard. The basic rules are one page, perfectly clear; the god powers are described over two pages, and can sometimes be a little confusing.

This version does not have the ocean "mat" under the island. But like the island base itself, that is a purely cosmetic bit that has nothing whatsoever to do with the gameplay.
Read more
19 people found this helpful

D. McCoy
4.0 out of 5 stars A little "better" as a 2-Player game, but great gameplay and beautiful artwork
12 January 2018 - Published on Amazon.com
Verified Purchase
While it IS a 2-4 player game, the instructions state that it is "better" played with just 2 players. I agree. There are 6 player pieces ("builders"), but when playing 2-player, you each select a SET of 2 same-colored pieces and you get to move one or the other during your turn. When playing 3 or 4 players, each player gets just one piece. So I wish it were more of a "true" 4 player game where no game play or pieces are sacrificed. It's simple game play as far as mechanics of building and goal to win, but there is certainly some strategy that young kids can start to pick up on. I've played a few times with my 6-year old and she's starting to think ahead now and plan her next couple of moves (including blocking me!), which is great. It's smart to follow the game instructions and play your first few games WITHOUT the God or Hero cards. Then add the basic cards into game play, and then finally the advanced cards (the basic and advanced cards are described in the instructions and on the cards themselves). Great quality game, nothing really for young kids to break. I play with my 6, 8, and 10 year old kids. Card artwork is awesome and there are small details on the plastic game pieces.
Read more
13 people found this helpful
Go to Amazon.com to see all 292 reviews 4.5 out of 5 stars
Get FREE delivery with Amazon Prime
Prime members enjoy FREE Delivery and exclusive access to movies, TV shows, music, Kindle e-books, Twitch Prime, and more.
> Get Started
Back to top
Get to Know Us
Make Money with Us
Let Us Help You
And don't forget:
© 1996-2020, Amazon.com, Inc. or its affiliates