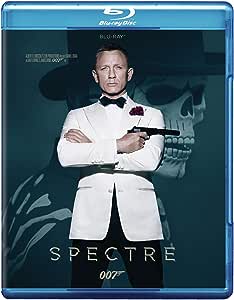 A cryptic message from the past sends James Bond (Daniel Craig) on a rogue mission to Mexico City and eventually Rome, where he meets Lucia Sciarra (Monica Bellucci), the beautiful and forbidden widow of an infamous criminal. Bond infiltrates a secret meeting and uncovers the existence of the sinister organisation known as SPECTRE.

Meanwhile back in London, Max Denbigh (Andrew Scott), the new head of the Centre for National Security, questions Bond s actions and challenges the relevance of MI6, led by M (Ralph Fiennes). Bond covertly enlists Moneypenny (Naomie Harris) and Q (Ben Whishaw) to help him seek out Madeleine Swann (Léa Seydoux), the daughter of his old nemesis Mr. White (Jesper Christensen), who may hold the clue to untangling the web of SPECTRE. As the daughter of an assassin, she understands Bond in a way most others cannot.

As Bond ventures towards the heart of SPECTRE, he learns of a chilling connection between himself and the enemy he seeks, played by Christoph Waltz.

4.7 out of 5 stars
4.7 out of 5
9,789 global ratings
How are ratings calculated?
To calculate the overall star rating and percentage breakdown by star, we don’t use a simple average. Instead, our system considers things like how recent a review is and if the reviewer bought the item on Amazon. It also analyses reviews to verify trustworthiness.

Gareth B.
5.0 out of 5 stars The best Daniel Craig Bond (so far)
Reviewed in Australia on 2 January 2021
Verified Purchase
Spectre continues from where Skyfall finishes but thankfully doesn't replicate its predecessors diabolical first half. We follow a rogue Bond chasing down one clue after another on the trail of a criminal organisation and "dead" mastermind - with all the expected action, cars and girls. Spectre is pure and simple James Bond movie - never going to win any awards - just don't expect anything else and enjoy!
Read more
Helpful
Report abuse
See all reviews

Brendan Ray Cyrus
1.0 out of 5 stars Damp Squib
Reviewed in the United Kingdom on 7 October 2018
Verified Purchase
Eliot Carver (Johnathan Pryce) was the media baron 'baddie' who acts as the main antagonist of the 1997 film 'Tomorrow Never Dies'. He was miscast and ineffectual. Not as ineffectual as Christoph Waltz. C. Waltz is totally miscast. He plays the villian Blofeld; he is awful with no menance whatsoever. Daniel Craig looks bored, wooden, miserable, humourless, and seems to be in it for the pay cheque.
Everything goes down hill after the dire theme song 10 minutes into 'Spectre'. This film is a Jaw-dislocating yawn.
Absolutely boring film with ridiculous story line e.g. fight scene on a night train when Bond and his exquisitely beautiful lover get beaten half to death, then walk back into their trian carriage and make love.
OST = non-descript soundtrack by Thomas Newman. I knew T.Newman was aboard this project because the music in Spectre is similar to what you can hear in 'American Beauty' and 'Jarhead'. Both films directed by Sam 'Spectre' Mendes.
Almost 2.5 hours long = celluloid boredom. Skyfall was brilliant; Spectre is rubbish.

PS. ''Spectacular'' 5* review by The Guardian - Did they receive a blank envelope stuffed full of $$$ ?

cora
5.0 out of 5 stars In the Tradition of the Early Bond Films
Reviewed in the United Kingdom on 28 April 2018
Verified Purchase
Finally here's a fun Bond film with Daniel Craig. It's a rather convoluted story and I'm not sure if I really wanted to see this particular Bond villain again in a new incarnation, but the other aspects of the film more than make up for all that. The opening sequence is one of the best in the series, with mindblowing stunts and locations, there are nods aplenty to pretty much every Bond film ever made and there are two amazing Bond girls in this, a stunning Italian beauty and a serious love interest reminiscent of the cellist in the The Living Daylights.

Add to that a couple of highly entertainig chases, a really good fight with a formidable henchman, and a bit of fun with Q coming to Bond's rescue in the field. I can only speak for myself, but for me it's my favourite of the Craig era - there is a bit of the humour of early film here and that's not a bad thing.

Gins
3.0 out of 5 stars Okay
Reviewed in the United Kingdom on 30 December 2019
Verified Purchase
I have Never liked Daniel Craig as James Bond as I have always considered him too rugged and not sophisticated or 'gentlemanly' enough and I hate the scripts where the little idiosyncrasies of JB are no longer written in, neither are Q's gadgets and there is a distinct lack of the quintessential Bond theme written into the musical score… all of which I consider to make a Bond film 'BOND'.
So having said that, since being bitterly disappointed with his first portrayal in Casino Royale (2006) I have watched his subsequent offerings as spy films rather than Bond films and I have to say Spectre for me lacks lustre for the afore mentioned reasons but also the baddie, really didn't come over as a villain or particularly bad at all. There were a few little gems: the car chase, the wingless plane, the sofa, needles & chess game but overall it's a no from me.
The one Craig JB I did like however was Skyfall - now that was a great Spy film with entrancing storyline, brilliant villain, emotional, pathos with JB history - his heritage/family/home/old car etc. as well as loads of fast thinking, twists and turns action.

DAVID KEMP
5.0 out of 5 stars A GREAT THRILLER
Reviewed in the United Kingdom on 8 April 2018
Verified Purchase
This has everything you could wish for in a Bond film - exotic foreign locations, a truly unpleasant villain (Christoph Waltz) and a beautiful and Intriguing leading lady (Lea Seydoux). If I have one reservation, it is that Monica Bellucci (once undoubtedly the most beautiful film star in Europe, succeeding Claudia Cardinale, the pin-up of an earlier generation) was cast just a tad too late in life, and with a miniscule part to boot. Still, this was a thriller that kept me one the edge of my seat..
Read more
3 people found this helpful
Report abuse

Austin haigh
5.0 out of 5 stars Five star Bond
Reviewed in the United Kingdom on 8 August 2016
Verified Purchase
An almost faultless James Bond movie, which is only let down by a slightly lame ending. A great script, great action (the pre-title sequence is up there with the very best), great acting and Daniel Craig is now totally irreplaceable as Bond. Skyfall had said goodbye to 2 of the franchises stalwarts in Dame Judy Dench and the Aston Martin DB5, so one of the most pleasant surprises here is that both return in cameo appearances.
Read more
5 people found this helpful
Report abuse
See all reviews
Back to top
Get to Know Us
Make Money with Us
Let Us Help You
And don't forget:
© 1996-2021, Amazon.com, Inc. or its affiliates