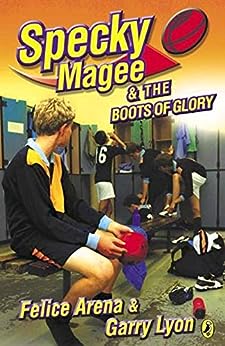 Ready to make his mark. --This text refers to an alternate kindle_edition edition.

Felice Arena writes and illustrates books for young kids, older kids, and those that are big kids at heart. His books have topped bestseller lists and garnered a number of awards. Felice lives in Melbourne, Australia.

Garry Lyon made a remarkable impression during his AFL career. He won Best and Fairest twice, gained All-Australian selection and led the Melbourne Football Club's goal-kicking. He held the post of captain from 1991 to 1997. In 1999, Garry announced his retirement, ending an outstanding career, and now appears on Channel 9's AFL coverage and The Footy Show.

Stig Wemyss is an actor, writer and the voice behind millions of children's audiobooks. Well, not millions. Thousands … alright, more like hundreds … he has a huge fan club. Bolinda audio is constantly receiving letters from kids saying things like 'Stig rocks' and 'I love Stig' and 'Stig Wemyss is the best narrator in the world'. Of course we don't show Stig all these letters, as he already thinks he's the best narrator in the universe! Stig is also the author of the exciting in-car audio entertainment series, The Tripp Diaries, so now he thinks he's the best narrator and the best author in the universe. We think he is too, but let's just keep that to ourselves. --This text refers to an alternate kindle_edition edition.

Bookappraisal
4.0 out of 5 stars Great for the boys, to encourage their reading
Reviewed in Australia on 28 June 2014
Verified Purchase
Reading this book with some of my students. First one I have read now determined to read the set. Enjoyed throughly the different genre.
Read more
Helpful
Report abuse
See all reviews
Back to top
Get to Know Us
Make Money with Us
Let Us Help You
And don't forget:
© 1996-2021, Amazon.com, Inc. or its affiliates