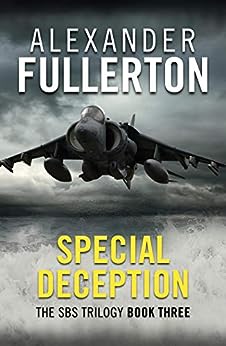 Alexander Fullerton is the author of The Nicholas Everard series and the SOE series. --This text refers to an out of print or unavailable edition of this title.

ANDREW TOWNSEND
2.0 out of 5 stars POOR EDITING
Reviewed in Australia on 18 October 2017
Verified Purchase
What is this- a quick cut and paste from printed text? This is a mess of missing words and spelling errors. Invest in a human editor and produce a proper book
Read more
Helpful
Report abuse
See all reviews

Noel
4.0 out of 5 stars Poor proof-reading
Reviewed in the United Kingdom on 5 April 2017
Verified Purchase
I have to agree with colinr's review. The books have a good story-line, good pace, good detail and good characterisation but are spoilt by the exceptionally poor proof-reading which allowed so many typographical errors; one amusing example being where the word "brothels" inadvertently replaced the word "brother" - however, I will be looking out for more from this author but PLEASE get a decent proof-reader.
Read more
One person found this helpful
Report abuse

alan pritchard
3.0 out of 5 stars An acceptable read
Reviewed in the United Kingdom on 18 May 2020
Verified Purchase
This was an OK military escapade but nothing special. A storyline which stretched the imagination somewhat coupled together with numerous typographical errors spoilt the overall enjoyment.
Read more
Report abuse

Kindle Customer
3.0 out of 5 stars A 3 star read
Reviewed in the United Kingdom on 20 September 2019
Verified Purchase
This was a five star yarn brought low by diabolical editing. Handbook is shot through with mis spellings and a poor understanding of how English is written or spoken.
Read more
Report abuse

Peter Croft
3.0 out of 5 stars Disappointing
Reviewed in the United Kingdom on 30 August 2017
Verified Purchase
I had read the previous books in the SBS Trilogy series each of which I rated highly. In contrast I found this story unconvincing and the various strands of the plot unnecessarily complicated with the final extraction lacking credit ability.
Read more
Report abuse
See all reviews
Back to top
Get to Know Us
Make Money with Us
Let Us Help You
And don't forget:
© 1996-2021, Amazon.com, Inc. or its affiliates