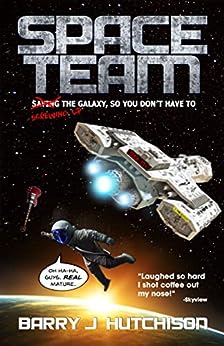 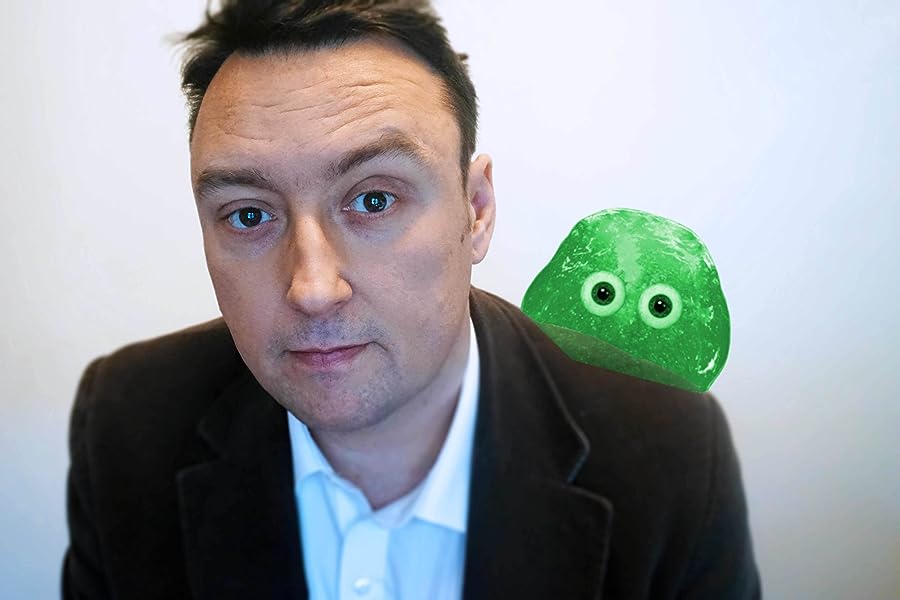 Barry J. Hutchison is a multi-award-winning author of over 100 books. He's also standing behind you right now.

Born and bred in the Highlands of Scotland, Barry began his writing career writing novels for children and teenagers, before launching his first series of novels for adults - 'Space Team' - in 2016.

Since then, he has continued to write the 'Space Team' series, alongside 'Dan Deadman, Space Detective,' and the 'Sidekicks' superhero series.

As well as books, Barry writes for comics and animation, and is the only person alive to have written both the comic-book mini-series and a broadcast episode of 'Supermansion' starring Bryan Cranston (Breaking Bad, Malcolm in the Middle) and Chris Pine (Star Trek, Wonder Woman).

Find out more about Barry and grab some free books at www.barryjhutchison.com/freebooks

4.4 out of 5 stars
4.4 out of 5
1,172 global ratings
How are ratings calculated?
To calculate the overall star rating and percentage breakdown by star, we don’t use a simple average. Instead, our system considers things like how recent a review is and if the reviewer bought the item on Amazon. It also analyses reviews to verify trustworthiness.

Trevor Willmot
4.0 out of 5 stars Old school BEM type comedic sci-fi
Reviewed in Australia on 31 March 2018
Verified Purchase
Took me back a while in time this one. This seems to me to be whatever “ non sci-fi people” think the genre is all about which of course is parsecs from the reality. This is of the “potboiler “or “pulp fiction” type of thing, but still more readable than some of that stuff! I thoroughly enjoyed it and read it in rather a shorter period of time than I should have, as a result.

Hitchhikers Guide has the edge though, just 1 step up again even if I can’t exactly define why. However I look forward to the next one, I think these characters have quite a few stories in them.
Read more
One person found this helpful
Helpful
Report abuse

If you like your sci-fi with a heavy dose of humour, then this is the book for you.

The book is set around a non-stop self-deprecating protagonist with a serious attack of charm who managed to make me chuckle and cringe both at the same time.
It’s rare for me to laugh out loud when reading, so I totally enjoyed this book enough for me to go and pickup Volume 1, ensuring that I get the next two books as well.
Good fun, good read. I thoroughly enjoyed it.
Read more
One person found this helpful
Helpful
Report abuse

MajorDad
4.0 out of 5 stars Overly stupid!
Reviewed in Australia on 28 January 2018
Verified Purchase
The plot was fine, the characterisation was fine, the story balanced and the writing was above average. It's just that I found Cal's humour irritating and juvenile which was a pity because I quite liked the book. However, if Cal continues like that in the rest of the series I'm better off, for the sake of my sanity, not to read them. Some may like schoolboy humour, I don't - sorry.
Read more
One person found this helpful
Helpful
Report abuse

Dahrose
TOP 100 REVIEWER
4.0 out of 5 stars Amusing tale
Reviewed in Australia on 25 November 2017
Verified Purchase
3.5 read - amusing hero carries the entire story. Fish out of water/mistaken identity - Cal Carver, petty criminal, steps into the shoes of a cannibal serial killer when he is kidnapped by space aliens to save the universe from a deadly plague.
I had fun with this. Well written, plotted and rounded out by some interesting support characters.
Read more
One person found this helpful
Helpful
Report abuse

Phil
5.0 out of 5 stars Simply and uniquely something different and seriously, a great read, 10 thumbs up
Reviewed in Australia on 2 March 2018
Verified Purchase
I really enjoyed this book and am certain that you will too.
Add the audiobook which is superbly read and you will instantly find yourself translated into another realm of time and space and find yourself not wanting to come back. It really is that good a tale, take a chance, you won’t be disappointed.
Read more
Helpful
Report abuse

HazelM
TOP 500 REVIEWER
5.0 out of 5 stars Hilarious Space Romp
Reviewed in Australia on 6 March 2019
Verified Purchase
At the risk of repeating myself - this is Hilarious !!
Totally brilliant adventure for anyone looking for a light-hearted romp thru space. Will def. be reading more of this author/series
Read more
Helpful
Report abuse

Elizabeth
4.0 out of 5 stars I enjoyed it
Reviewed in Australia on 5 June 2018
Verified Purchase
Light hearted space comedy.

Jarrak
5.0 out of 5 stars Space Review
Reviewed in the United Kingdom on 15 July 2017
Verified Purchase
Cal Carver a relatively harmless conman/grifter is due to spend the next couple of years at a low security prison but ends up at a state facility and is unable to charm the warden, infact quite the opposite. Cal won't be transferred until he has spent a night sharing a cell with a convicted murdered and cannibal and that actually turns out not to be the worst thing to happen to him over the next few days. So the prison is attacked by a well armed and professional group that night, yes most of humanity never see another day and Cal is dumped pretty much head first into a situation that actually favours his skills and allows him to survive and then the real adventure begins.
I came across Space Team as a recommendation after reading Pew! Pew! - Sex, Guns, Spaceships... Oh My!  Pew! Pew! - Sex, Guns, Spaceships... Oh My!  and knowing nothing about Space Team than the blurb opened it up (well on my kindle) and pretty much decided I would be purchasing the whole series after just the first chapter. Yes this novel is that funny and while humour is certainly subjective the cast of characters, their interactions and the ridiculous situations they get themselves into (and out of) are just too entertaining to describe. I can not recommend this novel too highly if you are looking for some hilarious and even silly at times well structured and written space humour yet retaining a solid scifi foundation which keeps the novel from crossing into the spoof category.
I have indeed purchased the five other novels in the series and have no doubt that I will enjoy them immensely.
Read more
5 people found this helpful
Report abuse

Brian J. Poole
5.0 out of 5 stars Spaceships and chuckles
Reviewed in the United Kingdom on 10 May 2017
Verified Purchase
I tell my friends that I'm at my happiest if a film or book has a spaceship in it. So I read a lot of sci-fi but not a lot of comedy...at last I can do both. This book works, the humour is a bit Red Dwarf but I like Red Dwarf - the pace is fast, the situations suitably off the wall and the 'team' is made up of fun contrasting individuals. Already finished book 2 and pleased there's a whole series. Recommended.
Read more
6 people found this helpful
Report abuse

Bev Humphrey
5.0 out of 5 stars Be prepared to laugh out loud - don't read in places where this will be embarrassing!
Reviewed in the United Kingdom on 28 September 2016
Verified Purchase
Well what bundle of pure joy this book is! No.....really for once I'm not being sarcastic, I really did love every page of this funny space adventure. I've always enjoyed Barry Hutchison's sense of humour (if you haven't read The 13th Horseman or The Book of Doom you need to!) but in this book he gives his sense of fun and ridiculousness full reign to laugh out loud effect. I had the Red Dwarf theme tune playing in my head all the time whilst reading which is never a bad thing, and main character Cal is certainly reminiscent of Lister, with the same slightly irritating at times, wisecracking character. So many pastiches and nods to sci fi tropes that at times I felt I was reading too fast and needed to slow down to fully appreciate the cleverness of the words. Looking forward to further adventures with this band of misfits!
Read more
12 people found this helpful
Report abuse

Kes Cross
5.0 out of 5 stars This is what happens when people think you ate your parents
Reviewed in the United Kingdom on 31 July 2017
Verified Purchase
No, he's not Terry Pratchett. No, he's not Douglas Adams. But what Barry J Hutchinson delivers is his own sassy tone of voice that works perfectly in this 'space' opera (seriously, if Mech saw me write that, he'd dial all the way around to the left...). Sharp, imaginative, and with plenty of stuff getting blown up, including entire moons, it's a rollicking romp through the stars (a 'space romp', if you will) where the pilot's only ever flown a simulator, the mechanic hates the captain, the captain shouldn't really be the captain on account of him not actually having eaten anyone, and a small blub of green silly putty repeatedly saves the day.

Fortunately, it's the first one in a series. If they all hold up as well as this one, I'll be one happy camper.
Read more
4 people found this helpful
Report abuse

Corben Duke
5.0 out of 5 stars Cal & Splurt … the Penn & Teller of Space
Reviewed in the United Kingdom on 29 May 2017
Verified Purchase
Love this book. The star of the show is undoubtedly ‘Captain’ Cal Carver. His quick fire wit leaps off the page.
This is really exceptional writing. Not only does the author build a successful plot but he also laces it with great humour. And that’s not easy to achieve. I can only think of a few British comedy creations which achieve the same level of quick fire wit with every sentence – Norman Stanley Fletcher (written and performed by Ronnie Barker) springs to mind. Cal Carver compares very favourably. I’m guessing that the author Barry J. Hutchison is Cal Carver – he must have been a nightmare as a schoolboy at the back of the classroom endlessly goading his teacher with ‘helpful’ quips.
I don’t have any criticism to make. Great writing, entertaining story, a good bunch of characters … and so funny. What’s not to like.
My 2nd favourite character is Splurt – a mute, blobby, shape-shifting alien. Cal & Splurt are a bit like Penn & Teller. I’m hoping that one of the Space Team series of books has Splurt discovering a voice, and it turns out that Splurt is every bit as cocky as Cal.

Now then, which book to read next? How can I resist a title like “Space Team: The Search for Splurt”.
Read more
8 people found this helpful
Report abuse
See all reviews
Back to top
Get to Know Us
Make Money with Us
Let Us Help You
And don't forget:
© 1996-2021, Amazon.com, Inc. or its affiliates