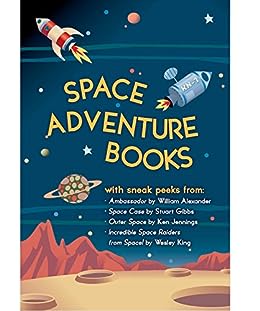 Stuart Gibbs is the New York Times bestselling author of Charlie Thorne and the Last Equation, Charlie Thorne and the Lost City, the FunJungle and Moon Base Alpha series, and the Spy School series. He has written screenplays, worked on a whole bunch of animated films, developed TV shows, been a newspaper columnist, and researched capybaras (the world’s largest rodents). Stuart lives with his family in Los Angeles. You can learn more about what he’s up to at StuartGibbs.com.

William Alexander won the National Book Award for his debut novel, Goblin Secrets, and won the Earphones Award for his narration of the audiobook. His other novels include A Festival of Ghosts, A Properly Unhaunted Place, Ghoulish Song, Nomad, and Ambassador. William studied theater and folklore at Oberlin College, English at the University of Vermont, and creative writing at the Clarion workshop. He teaches in the Vermont College of Fine Arts MFA program in Writing for Children and Young Adults. Like the protagonist of Nomad and Ambassador, William is the son of a Latino immigrant to the US. Visit him online at WillAlex.net and GoblinSecrets.com, and on Twitter via @WillieAlex.

Ken Jennings grew up in Seoul, South Korea, where he became a daily devotee of the quiz show Jeopardy! In 2004, he successfully auditioned for a spot on the show and went on an unprecedented seventy-four game victory streak worth $2.52 million. Jennings’s book Brainiac, about his Jeopardy! adventures, was a critically acclaimed New York Times bestseller, as were his follow-up books Maphead and Because I Said So! He is also the author of Planet Funny. Jennings lives in Seattle with his wife Mindy and two children.

Wesley King is the author of the Edgar Award–winning OCDaniel, which Booklist praised as “complex and satisfying” in a starred review. It was named a Bank Street Best Book of the Year and received Canada’s Silver Birch Award. Its companion, Sara and the Search for Normal, received a starred review from School Library Journal.  King’s first middle grade novel, The Incredible Space Raiders from Space!, was called “a well-drafted coming-of-age story” by Publishers Weekly. King is also the author of Kobe Bryant’s New York Times bestselling Wizenard series. He lives in Nova Scotia.

Mark Kelly is a retired astronaut and US Navy Captain. His picture book Mousetronaut, illustrated by C. F. Payne was a #1 New York Times bestseller. He flew his first of four missions in 2001 aboard Space Shuttle Endeavour, the same space shuttle that he commanded on its final flight in May 2011. In 2020 he will be running to represent Arizona in the United States Senate. --This text refers to an alternate kindle_edition edition.

M. Dowden
4.0 out of 5 stars Five Book Samples
Reviewed in the United Kingdom on 10 July 2015
Verified Purchase
I don’t often get sampler books but they can come in handy, and my local bookshop has supplied me with ones in the past so that I can decide what new titles I would like them to order for me. This book is of course for children, but probably adults will read some of the books here. This does have an active table of contents so you can find each piece without any difficulty.

When an alien arrives on Earth it is intrigued by Gabe Fuentes and makes itself known to him. Being offered a position as an ambassador Gabe jumps at the chance, but will everything be plain sailing? This excerpt shows us Gabe with his friend and siblings, and the alien looking on.

Dashiell Gibson is twelve and currently lives on the moon in Moon Base Alpha. Known as Moonies, although the parents have things to do for the children it can be boring. But when one of the adults dies Dashiell doesn’t think it was an accident like the others, but a murder. Here we read about the differences of life on the moon and how it is portrayed to the public with a nice glossy coating, and we read of a phone conversation that Dashiell hears whilst sitting on the toilet; the reason why he thinks that someone was murdered.

This is a non-fiction book that gives you facts about space, trivia and quizzes to test yourself with, and has illustrations. Here we have the introduction and the chapter about the Sun, although there is a lot more information here. From the sample this looks fun and informative and should keep children interested.

The Incredible Space Raiders from Space by Wesley King

Jonah suddenly finds himself on a spaceship, and is introduced to the Incredible Space Raiders, who are on a mission to save the Universe. Here we read of when Jonah wakes up on the spaceship ‘The Fantastic Flying Squirrel’ and is met by Willona the Awesome. Jonah finds out that he has been specially chosen for the mission of the Incredible Space Raiders, what it is, and the dangers that the members face on the spaceship.

Twins Scott and Mark are in serious trouble with their dad and for punishment have been sent to their granddad. When their granddad suggests that they do something constructive, they gather a group of other children in an effort to build a rocket. Here we see why the twins get into trouble and then we follow them as they arrive at Grandpa Joe’s house.

There is something here to please a lot of children and so let them make their choice, as not every book will appeal to everyone.
Read more
One person found this helpful
Report abuse
See all reviews
Back to top
Get to Know Us
Make Money with Us
Let Us Help You
And don't forget:
© 1996-2022, Amazon.com, Inc. or its affiliates