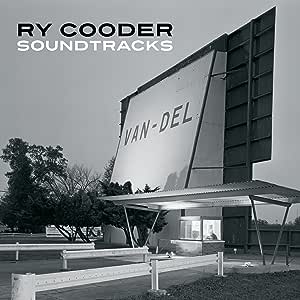 Share
Only 1 left in stock.
Add to Cart
Buy Now

Secure transaction
Your transaction is secure
We work hard to protect your security and privacy. Our payment security system encrypts your information during transmission. We don’t share your credit card details with third-party sellers, and we don’t sell your information to others. Learn more
Details
Ships from
Amazon AU
Sold by
Amazon AU
Soundtracks has been added to your Cart
New (3) from
$62.06 + FREE Delivery

The music is presented in a clamshell box that features new artwork by Tornado Design, the group behind the distinctive look found on several of Cooder s recent studio albums, as well as Rhino s 2008 anthology, The UFO Has Landed.

After Cooder worked on soundtracks for Watermelon Man and Performance (starring Mick Jagger), he began producing soundtracks on his own. He started in 1980 with The Long Riders. It was the first of many soundtracks that Cooder would record for the film s director, Walter Hill. Many of them are included in this set: Crossroads, Johnny Handsome, Trespass, and Blue City, a film Hill produced.

Cooder enjoyed a prolific two-year period between 1985-86 when he reeled off more than half of the soundtracks in this collection, including Alamo Bay, Blue City, Crossroads, and Paris, Texas, the Wim Wenders film that won the prestigious Palme d Or in 1984 at the Cannes Film Festival.

The soundtracks vary widely in terms of style, even as the group of musicians who performed on them remained remarkably consistent. In fact, some combination of drummer Jim Keltner, Memphis legend Jim Dickinson, guitarist David Lindley, and composer Van Dyke Parks can be heard on every soundtrack included in this set. In addition to those core musicians, the albums also boasts some fantastic guest performances by Cesar Rosas and David Hidalgo of Los Lobos on Alamo Bay, keyboardist Benmont Tench of the Heartbreakers on Blue City, and harmonica player Sonny Terry on Crossroads.

Darren Big Nose Walker
5.0 out of 5 stars And Ry not?
Reviewed in the United Kingdom on 12 October 2017
Verified Purchase
What can I say about Ry Cooder? A genius? Definitely. Someone that is not afraid to take music to different places, explore and allow us to enjoy the journey. There are the obvious film soundtracks such as Paris, Texas and Crossroads but there are also films where the music is more memorable than the actual movies they represent. Anyone have 'Blue City' as their favourite blockbuster of all time? No me neither. But as for the music that is something I will go back to time and time again.

With the box itself it is utilitarian, and is fit for the purpose intended. The albums are in the cardboard sleeves that copy the original LP's so expect eye strain if you try to read them, but personally I couldn't care less who the producer's assistant was or the name of the studio where it was recorded.

There is one slight drawback as the soundtrack album "Last Man Standing" is not included but that can be bought on its own (and I already had a copy of that anyway). So to anyone that appreciates the fine musical craftsmanship of Mr Ryland Cooder, or wants to discover it, then I think you would not be disappointed in this.

Mr Richard Smallbone
4.0 out of 5 stars Bear in mind these are film soundtracks
Reviewed in the United Kingdom on 18 May 2019
Verified Purchase
Well from my perspective its a great value set from Ry Cooder. Great as a background when in idle chatter with others but listen more carefully and you can tell who the composer is without a shadow of a doubt. Classic Cooder slide guitar laid back and relaxed. Personally I enjoy it and I am familiar with some of the films but its not for everybody.
Read more
One person found this helpful
Report abuse

Dave Howes
5.0 out of 5 stars Superb music
Reviewed in the United Kingdom on 29 June 2019
Verified Purchase
A must have set of cds
Read more
One person found this helpful
Report abuse

k gotheridge
5.0 out of 5 stars Five Stars
Reviewed in the United Kingdom on 10 May 2018
Verified Purchase
I have all of these on vinyl. If only Southern Comfort was available as a sound track!
Read more
One person found this helpful
Report abuse

buckie bill
5.0 out of 5 stars Another classic
Reviewed in the United Kingdom on 9 April 2019
Verified Purchase
Fantastic!
Read more
One person found this helpful
Report abuse
See all reviews
Back to top
Get to Know Us
Make Money with Us
Let Us Help You
And don't forget:
© 1996-2021, Amazon.com, Inc. or its affiliates