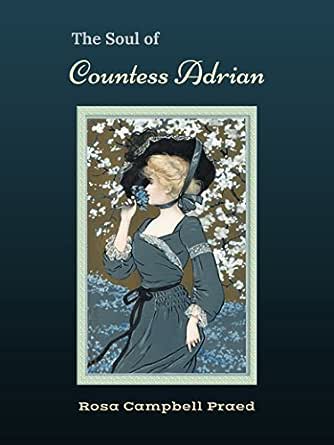 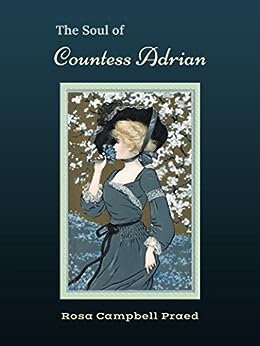 The Soul of Countess Adrian: A Romance Kindle Edition

Archyateaslug
3.0 out of 5 stars Intriguing tale of the occult in London's 1890s Bohemia
Reviewed in the United Kingdom on 24 September 2018
Verified Purchase
Set in London’s Upper Bohemia, a gathering place for ‘mummers, novelists, poets, artists, dilettanti members of parliament and sensation-hunting visitants from a more aristocratic sphere,’ this obscure, 1890s novel revolves around the possible relationship between ‘ethereal’, golden-haired, American actress Beatrice Brett and ‘rich, handsome’ artist Bernard Lendon. Despite initial misgivings Bernard is excited to finally meet someone who isn’t one of those ‘Western lecturing women who can spout forth art, hygiene, or Free Love.’ The narrative follows Bernard who continues to be captivated by Beatrice and intrigued by her uncle who works in the mysterious, emergent field of ‘magnetic dynamics.’ Bernard and Beatrice are reunited at a salon where her recital is the centre of interest, not least from the socialist mystic Maddox Challis and the infamous, sinister Countess Adrian - whose fascination with Beatrice is somehow linked to a theory that a stronger spirit may possess a weaker one. Soon Beatrice, who just wants to be left alone to study acting, is torn between two powerful personalities both attracted to her seeming fragility but for vastly different reasons; while Bernard is caught between her and Adrian.

This starts out as a stock piece of romantic fiction replete with requisite plot progressions and gender stereotypes. However, it’s the work of prolific, popular author Rosa Campbell Praed. An Australian who moved to England in the 1870s, Praed was part of a literary and artistic social group that included actress Ellen Terry and writer Conan Doyle. Like Doyle, and many others, Praed was caught up in the spiritualism movement and explorations of the ‘night-side of nature’, she later joined the equally fashionable Theosophy Society, entertaining Oscar Wilde and his wife at her Theosophical gatherings. Praed’s pursuits and social connections underpin her novel transforming it from a standard romance into an unexpected story of obsession and occult forces. As a bonus it’s also an illuminating, detailed reconstruction of a significant Victorian subculture.

Praed writes in a clear direct style, using dialogue to progress her story although she’s prone to sudden descents into the realms of melodrama. She deploys codes easily decipherable by her fellow believers: the emphasis on Beatrice’s delicate sensibilities may mark her out as perfect wife material but in Praed’s milieu it also connotes potential for supernatural abilities -at the time fragility was a marker of potential as a medium who, since the notorious Fox sisters, were associated with notions of the gentle and the feminine. Clearly Praed sought to introduce her faith to a wider audience so she represents Bernard as an outsider which allows other characters to supply detailed accounts of occult practices and beliefs from magnetism to astral projection.

Although the novel has been billed as ‘weird’ fiction I thought it was a surprisingly matter-of-fact account, which seemed to build as much on prevailing concepts of the occult as a developing scientific discourse than as an explicit counter to an increasingly ‘disenchanted’ world. There were incidental references to vampirism but these came across as the kind of addition an editor might suggest as a marketing ploy, to 'cash in' on the success of overtly gothic writers like Le Fanu. Unlike the ‘weird’ fiction of writers like Blackwood, whose atmospheric work is steeped in the eerie, I found Praed’s world emphatically mundane and surprisingly absorbing. Where Praed did seem to depart from convention was in her characterisation of Beatrice who, despite echoes of Dickens’s Dora, was surprisingly resistant to expectations of the feminine, a powerful actress success in her career is her most cherished desire. In Praed’s plot Lendon and Adrian are parallel figures, both are stronger spirits who desire control over Beatrice and Praed’s narrative is often ambivalent when it comes to judging which form of control is potentially the most pernicious. Countess Adrian, the villain of the piece, is also an intriguing character. Adrian is a notorious woman, unmarried, sexually experienced; her sophisticated exterior masks her ferocity, her Creole origins reinforce – like Bronte’s Bertha Mason – her outsider status. However, unlike Bertha Mason, there’s an ambiguous aspect to Praed’s depiction of Adrian, whose ‘bewildering charm’ is coupled with intelligence and perception, and who may be something other than she seems.