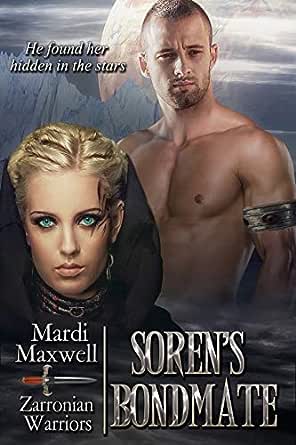 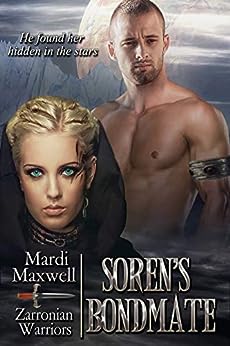 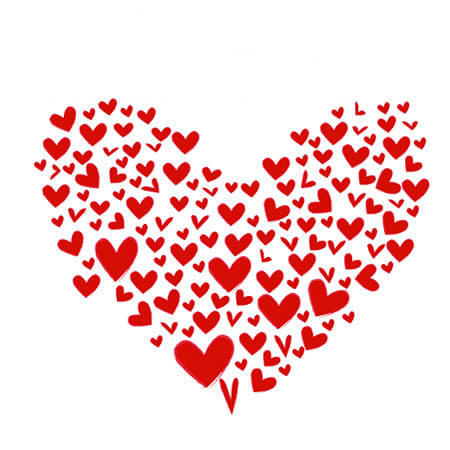 lisa
TOP 50 REVIEWER
3.0 out of 5 stars Buckets of derring-do but not enough heart
Reviewed in Australia on 1 December 2015
Verified Purchase
I gave the other books in this series five enthusiastic stars but 'Soren's Bondmate' did not engage me nearly as much. The second book 'Thorn's Bondmate' is one of my favourite books ever so it was disappointing not to find a similar evolution of the characters and their steamy relationships.

Soren is at death's door from not finding his mate when he crashes on a remote ice planet. Skye, a sorceress with multi mega powers, rescues him. She is also close to death for the same reason. So she heals him, mates him and bonks him in under five minutes. As you do. Then he gets superpowers too.

It was too fast for me and I ended up not believing in the romantic relationship. I think much of the author's attention was diverted into juggling the super powers instead of developing the sexual tension as she did so well in the previous books. The multitude of powers was too confusing for my tiny brain what with the throwing magic crystals and mind melding. But I did like the magic instant food, I mean who hasn't had that fantasy?

In previous books the main female characters were strong but vulnerable and this made them really relatable. Skye and Soren are too perfect, for example they are ready to sacrifice their lives for each other straight after their first bonk. I just couldn't buy it.

I was miffed with Skye sounding like a Stepford wife in her robotic compliance. For example when Soren says he will always lead, she responds 'when you put it that way we're equals but with different roles.' Also the book teeters between sexy and sexual harassment. Soren pats Skye's bottom to punctuate his superiority. It was a relief when he was chained and had to keep his hands to himself.

It got better as the main characters experienced difficulties that made them more relatable. To those who loved the first two books I say read this book but lower your expectations.
Read more
Helpful
Comment Report abuse

Leisha Andrews
TOP 500 REVIEWER
4.0 out of 5 stars I enjoyed this book
Reviewed in Australia on 29 December 2015
Verified Purchase
I enjoyed this series so far and am looking forward to reading the next when it's released.
Read more
Helpful
Comment Report abuse

Kindle Customer
5.0 out of 5 stars Soren's bondmate
Reviewed in the United Kingdom on 9 December 2015
Verified Purchase
Brilliant read, loved the whole series, if you enjoy romance, you will love this book, the relationship between the two main characters is complicated, but in the end they make it work.
Read more
Report abuse

T London
5.0 out of 5 stars Soren's story
Reviewed in the United States on 16 November 2015
Verified Purchase
5 stars
I strongly suggest you read the series so you will get a full understanding of why Soren is in the condition he is in at the beginning of this book. In his world he is a level 6 warrior and it would take a rare type of woman who could mate with him and save him. Without that woman he will surely die, which is the fate he has accepted.
Taking on dangerous missions in hopes that he can die before the fever kills him, he crashes into a place that is frozen and appears isolated. Skye, who is also in need of a mate to live, has been placed in that location for her own protection so when she comes across the wounded Soren, she knew she needed to use her healing powers to save him.
What neither of them could have expected was they were perfect for each other and would not only save each other’s lives, they would share their powers. Unfortunately, Skye didn’t go through the proper rules to mate with Soren which will later come back and haunt them. I wish I could go on and on about what they experience but you need to read it for yourself so you can feel the emotions that come with their journey. Grab some tissues, get a stiff drink and be prepared to sit on the edge of your seat.
As they take on the mission of battling the enemy that wants to control Skye’s planet, Soren will need to learn about the culture and how to manage his new powers that he shares with Skye. Their journey will be full of danger, risky missions, adventure, happiness, betrayal and love. I felt the story was well balanced and engaging new characters that will play an important role to the plot.
We also get to reconnect with the characters we have grown to love such as Thorn and Valan along with the other warriors. You will witness the combination of two teams of galaxy warriors having to train each other and learn to compromise powers all for the common good of the people and family.
I love this series but I loved Soren’s story the most. Mardi took a slightly different writing style with this book due to the new adventure Soren was going on. This story isn’t a duplicate of the first two, it is fresh and full of drama and suspense and I highly recommend it.
Read more
13 people found this helpful
Report abuse

Heather
2.0 out of 5 stars Not that great
Reviewed in the United States on 8 April 2016
Verified Purchase
This was the third book in the series (I think) but the first one I read so maybe that makes a difference in my 2 star rating but the first two did not sound good to me. I rally wanted to like this book because I need a good new syfy series to read but I rally did not care for it. The beginning was great and Skye is an amazing strong woman (the reason the book got any stars) but Soren started off wonderfully alpha but did not end strong. To not give away too many details of the story . . . "Stuff" happens and I expected Soren to to go on a rampage, kill kill kill, and be a total bad a*# where nothing could stand in the way of his love. What I got was a Soren that was stronger than ever but it seemed like he was spinning his wheels (for an ungodly amount of time) and not really getting anywhere. Not happy with ending.
Read more
3 people found this helpful
Report abuse
See all reviews
Get FREE delivery with Amazon Prime
Prime members enjoy FREE Delivery and exclusive access to movies, TV shows, music, Kindle e-books, Twitch Prime, and more.
> Get Started
Back to top
Get to Know Us
Make Money with Us
Let Us Help You
And don't forget:
© 1996-2020, Amazon.com, Inc. or its affiliates