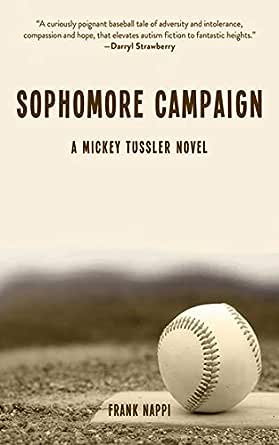 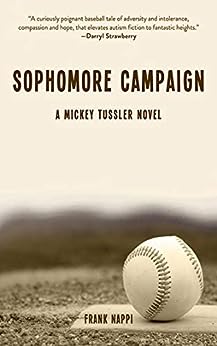 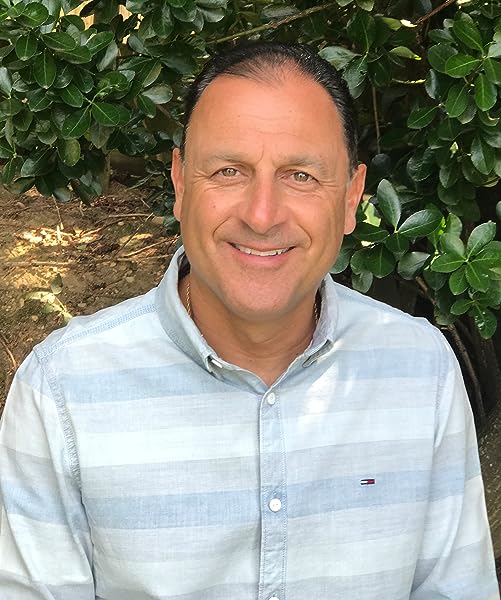 Frank Nappi has taught high school English and creative writing for over twenty years. Frank lives in Massapequa, New York, with his wife Julia and their two sons, Nicholas and Anthony. --This text refers to an alternate kindle_edition edition.

Amazon Customer
4.0 out of 5 stars Story of an autistic boy who changed the world
Reviewed in the United States on 15 October 2015
Verified Purchase
Another best-seller book by Frank Nappi, “Sophomore Campaign”, is a second part of the story of a young baseball player, Mickey Tussler who is suffering from autism. It takes place right after “The Legend of Mikey Tussler”, which was a basis for a famous movie, “A Mile in His Shoes”.

Everything changes when a new player joins the team – a young and aspiring African American – who changes the focus and immediately becomes a victim of racism and disrespect. Although Mikey due to his condition doesn't understand the anger and violence they are faced with, he decides to help him. The story continues: After a dramatic game, Mikey and his mother decide that he should never play baseball again because he had been being bullied, his manager Arthur Murphy persuades the boy not to give up on it. Because Mikey is different, he is still a target of violence and hatred.

“Sophomore Campaign” is an exceptional book about an exceptional boy and his extremely complicated relationship with the whole world and the people who don't understand him. An inspiring father figure, his manager Arthur, is taking effort to support and get to know the autistic kid's little world and develops romantic feelings towards his mother, but can one person make a difference?

The story gives an amazingly detailed picture of life in America in late 1940's, raising issues of racism, intolerance, childhood, and friendship. It would be interesting not only for baseball fans, but also become a pure inspiration for those who know what it is like to be different and unable to find their own place in this world. It is a beautiful story to read and a sad realization of knowing that being human is not enough, unless you have human heart. I am rating this book 4 out of 5 stars, a very good read.

im1rarebird
4.0 out of 5 stars Milwaukee Brewer Fans Will Enjoy This
Reviewed in the United States on 17 January 2014
Verified Purchase
This is Frank Nappi's second novel featuring Mickey Tussler. This is the continuance from the introductory novel "The Legend of Mickey Tussler: A Novel. In the first we meet Mickey, an autistic kid with a mean pitching arm. He is discovered by Arthur Murphy a baseball coach. He Plays for the Milwaukee Brewers (circa 1940's)a minor league team. He has become a fan favorite and the city has galvanized around him. The first book ended with a horrible amount of violence from a rival team that left Mickey shaken and his mom unsure whether to let him play again.

Molly, Mickey's mom is a battered wife and his dad doesn't much care for him. The coach becomes a father figure to him and as a result he also begins to develop feeling for his mother. In this novel we see that relationship develop. Trouble starts up right away as the rival teams picture is still having trouble accepting he was out pitched by a (retard) 1940's vernacular for the mentally challenged. When Coach Murphy hires a Negro for team everything explodes. Mickey doesn't understand the hatred and violence.

If you want a whitewashed version of life in America during that time period this is not the book for you. Frank Nappi gives us a cold hard look at where we came from and it is not pretty. Prejudice abounded and not just against Blacks it was aimed at anyone with a disability. We were a country of intolerances. In order to find out what happens to Mickey, Molly, Coach and the young Negro ballplayer, you will just have to buy the book. You will be engrossed in this book so deep that you will not want to put it down.

Robin Perron
5.0 out of 5 stars A great baseball lover for NONbaseball fans
Reviewed in the United States on 9 January 2014
Verified Purchase
Sophmore Campaign by Frank Nappi took me completely by surprise. I am not a baseball fan by any means but I was able to relate to the story in many ways. Being born in Wisconsin and having parents who talked about Robin Yount and Paul Molitor, I was thrilled to discover that the novel focused on the Milwaukee Brewers. This in and of itself drew me into the story despite its baseball focus. I was thrilled as I read more and realized that one of the main character Mickey Tussler was exhibiting symptoms of autism. With a background in Special Education and a lot of experience working with Autistic children and adults, I genuinely enjoy working with and learning about individuals on the Autism Spectrum. Two points of connection already had me won over, but as a read further and I saw the story take on the topic of segregation during the 1940’s and the struggle to concur it I knew that the book would be outstanding.

I enjoyed this story so much that I read it in less than a day. I couldn’t put it down. Thank you Frank Nappi for drawing me into your world. I thoroughly enjoyed it. I can’t wait to read another one.
Read more
4 people found this helpful
Report abuse

Betty Dravis
5.0 out of 5 stars Nappi Surpasses the Homerun! This one's a Grand Slam!
Reviewed in the United States on 26 April 2012
Verified Purchase
I have been a huge fan of author Frank Nappi since I read his debut novel, the award-winning  Echoes from the Infantry: A Novel  in 2005. My faith in his great potential was rewarded; since then he has written  The Legend of Mickey Tussler: A Novel  which was released as a film last September and is now a DVD. Movie title is "A Mile in His Shoes," starring Dean Cain and Luke Schroder.

And now Nappi has penned  Sophomore Campaign: A Mickey Tussler Novel , the exciting sequel which is also slated for film.

Sophomore Campaign picks up where "Mickey Tussler" left off, with Mickey, the autistic young baseball player, and Arthur Murphy, the coach who discovers him, entering another season of minor league baseball for the beloved Milwaukee Brewers.

Mickey's mother Molly finally leaves his abusive father and they move in with Murph who is very good to them, nurturing them in all ways. He becomes a surrogate father to Mickey, while Molly and Murph develop feelings for each other, but agree to keep it platonic.

After last season's violent conclusion, Molly is reluctant for Mickey to play again this year; she fears their main rival team might get violent again, damaging her son's spirit beyond repair.

With a wicked pitching arm, Mickey has become the team's most valuable asset and is idolized by baseball fans all over. When in the game, he overcomes his social awkwardness and mental fragility, and due to Murph's tender, loving care, he certainly learns all about baseball.

The trouble starts this season with the opposing pitcher holding a huge grudge against Mickey for gaining such popularity. With the approval of his unethical coach, he plans to undermine Mickey at every opportunity, even to cruelty, if need be. But the real trouble commences with Murph hiring an African American ballplayer with raw talent and great potential.

Remember, this is set in the 40s when prejudice was still pretty rampant... It's enough to say that the entire team is subjected to racial threats and violent episodes, one of which Mickey witnesses firsthand. His struggles to understand such ugliness and hatred affect his game... That's all I can say without giving spoilers.

Why does Molly Tussler finally consent for her son to play again? What happens when fans quit attending games because of their outdated prejudices, and how do the fans treat the new player Sledge? How does this effect Mickey? What happens between the club owner and Coach Murph? And how does the Klu Klux Klan become involved?

But for romantics, the main question is what finally happens between Murphy and Molly? :-)

I thoroughly enjoyed reading the answers to those questions, and I'm certain you will, also. Frank Nappi is a gifted writer who understands human nature and has a clear, concise way of presenting his stories. He makes his characters, the games and the scenery come alive before your eyes. I really care what happens to each and every one of them; even while rooting for the bad guys to get their comeuppance...

Despite representing the 40s accurately (with all its prejudice), this is a very wholesome, inspiring book. You will end up admiring this author as much as you love the spirit of Mickey Tussler, a role model for autistic children everywhere.

Since "The Legend of Mickey Tussler" was a homerun, Sophomore Campaign is a grand slam!

L. Frankel
5.0 out of 5 stars The Challenge of Diversity in Baseball in 1949
Reviewed in the United States on 16 October 2015
Verified Purchase
I didn’t read the first book in this series, The Legend of Mickey Tussler. This means that I didn’t start with the background on the characters and their relationships, but I eventually got up to speed. So I’d say that this book can stand on its own.

The optimism of the viewpoint character, team manager Arthur Murphy, occasionally falters. Yet when his players are beset by prejudice, his support is rock solid. Murphy, known as Murph, is a likable character. He is forward looking while at the same time cherishing traditional values like loyalty and integrity.

Although author Frank Nappi mainly writes serviceable straightforward prose, sometimes his style really shines. There are occasional poetic passages that impressed me. I had to jot one of them down in my book journal because it was just outstanding.

I spotted two copy editing errors in the last half of the book, but I consider that a fairly high level of accuracy. Relatively few books are 100% error free these days.

I consider Sophomore Campaign an inspiring story that confronts racism boldly through baseball. This book shows how baseball mirrors the surrounding society. It reflects an American culture that is slowly beginning to change, and the courage it took to implement such a transformation.
Read more
Report abuse
See all reviews
Get FREE delivery with Amazon Prime
Prime members enjoy FREE Delivery and exclusive access to movies, TV shows, music, Kindle e-books, Twitch Prime, and more.
> Get Started
Back to top
Get to Know Us
Make Money with Us
Let Us Help You
And don't forget:
© 1996-2020, Amazon.com, Inc. or its affiliates