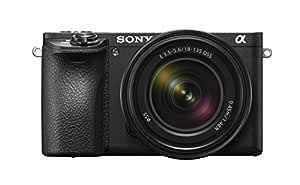 by Sony
4.5 out of 5 stars 173 ratings
Currently unavailable.
We don't know when or if this item will be back in stock.

Y. Wang
5.0 out of 5 stars You're really paying for the IBIS over the A6300.
6 January 2018 - Published on Amazon.com
Verified Purchase
I'm a professional photographer and I’ve owned every Sony mirrorless camera since the NEX 5N except for the newest A9. In my experience, this to be an excellent little camera that's good for an advanced hobbyist, backup camera for a professional, or a travel camera. If we were in January of 2017, I would definitely say this camera is NOT worth the $1,400 price over the MUCH cheaper A6300 ($900). However in 2018, the price of the A6500 has dropped to a much more manageable $1,100 putting it into a range of possibility if you're willing to pay for the higher specs. But what are you getting for the $500 over the A6300?

The answer is IBIS, and not much more, everything else is just small improvements that are nice to haves but not game changers. IBIS is a game changer. The specs between the two cameras are almost identical. Same 425 PDAF AF system, same 11fps shooting, same 24MP sensor. In fact the image quality of the two cameras are identical - the same noise at the same ISO levels. The big thing here is IBIS, in-body stabilization that compensates for camera shake and hand movement. IBIS is simply PHENOMENAL. It lets you takes photos slower than 1/30 handheld easily. Nightime shots that would normally result in smeared lights and ghosting double images are now significantly reduced. You can shoot confidently handheld almost anywhere and even shoot when not standing statue still. IBIS lets you get low light shots that are typically reserved only for full frame users. I'm always getting the side-eye from other Canon/Nikon photographers with their gear perched on tripods when doing long nighttime exposures in popular spots. They think I'm never going to get the shot, but the jokes on them because I did it hand-held with no heavy tripod!

The other improvement is a new front-end LSI. It's a fancy name for a faster processor. The LSI gives you a bigger buffer so you can shoot at 11fps continuously longer. If you're an action photographer that shoots in fast bursts then you are less likely to miss a shot. The camera is also a bit snappier with menus and you can also review shots quickly with less lag. Overall, I'm not doing 100+ images at a time so this really doesn't help me much, but that's not to say it's not useful to someone else. If you're a sports photographer or trying to capture running children who won't stay still you can happily spray and pick the few good ones afterwards.

They also moved the C1 and C2 buttons to a more reachable location on the top and the C2 is now a C3 button. These are small but welcome changes to offer more versatility in assigning them to useful options like eye-focus.

Finally, there's the touchscreen, unfortunately it's not well implemented. So far all of Sony's touch-screen additions into their cameras have been kind of an afterthought. The idea of a rear screen touch-assist focusing is great idea - you can use your thumb to change AF points instead of using clunky buttons to change zones and locations. However in practice, the touchscreen is too hard to use. First, if you shooting via the viewfinder, most likely you are shooting with your left eye. Some people shoot with their right, but I find you are not properly centered with the camera's mass (especially with a heavy lens). As a typical left-eye shooter, your nose will be touching the rear LCD and will cause unnecessary focus touches. I had so many aggravating moments with the AF changing and going everywhere before I realized it was my own nose messing things up. You can have the option of limiting the right side of the screen for touch so you can use your thumb to recompose while shooting, however the placement is still awkward and your nose will still cause miss-touches. I ended up turning the touchscreen off altogether, which in the end made the touch screen feature essentially useless.

Ultimately, the only thing you are paying for is the IBIS because image quality really hasn't changed. The A6500 isn't really much of a successor over the A6300, it should have been a replacement. Yet Sony sells this above the A6300 at an very inflated price. Really, most people buying this are professionals who own a full-frame A7ii/rii/sii camera and want a smaller more portable backup camera. Or you are an advanced professional that do not want to go up to the full frame size and expense. In the end it all comes down to the IBIS, it's the only big boost to image quality because it lets you get shots you normally wouldn't get. If you're just looking for a great pocketable mirrorless camera, get the A6300 and use the extra money for some nice lenses with OSS. That will generally make up the difference with the lack of IBIS. However if you absolutely must have the best or are going to adapt Canon or manual lenses, then in-body stabilization will make up for when there's no in-lens optical stabilization.

Edit, one last thing: Another gripe I have with this camera is that for the price, I would really like 1/8000 shutter speed. The max for this camera is 1/4000 - which with a f1.4 lens on a sunny day, will blow out all highlights easily even at 100 ISO. I discovered this while doing portraits with my 85mm f1.4 GM and everything was blown out. Owning an f1.4 lens lets you create beautiful artistic photos with amazing bokeh and subject isolation. However you can't use a f1.4 lens unless you have an ND filter to reduce light. Additionally the lack of 1/8000 shutter speed keeps this camera from being a pocket action camera with huge burst speeds. This was never a problem with any of the Sony full frame lines.

****If this review was helpful, please give me a vote! Thanks! :)
Read more

Jeff Ello - PhotonArmy .com
5.0 out of 5 stars A mirroless camera for a DSLR snob.
3 December 2016 - Published on Amazon.com
Verified Purchase
In comparing to the a6300, here are the important points:

In-body stabilization - this will add extra stabilization if you already have stabilized lenses, and it will provide stabilization for lenses that don't have it already. This is important for those of us who do photography or video with vintage lenses or high quality lenses without stabilization, like the Sigma Art series.

Big buffer - The a6300's buffer isn't small, but the camera waits to write to the card after a burst of shots. So for sports photographers, the new, larger buffer and the no-wait features are nice. You can review or continue to shoot while the camera writes to the card.

Overheating - It isn't so much that Sony "fixed" the heat problem... instead they provide a means of "living with" the heat the camera generates. As such, there are fewer scenarios in which this camera will shut down due to overheating vs the a6300.

The touchscreen is underwhelming in photo modes, it engages too slowly to be useful. In video mode it works, but not quite like you'd want. You can, technically, get it to focus on a subject and then track the subject, but making that happen is a chore. Most will find it difficult enough to use the default way. Sony needs to spend a bit more time on this.

All that said, the camera is almost identical to the a6300 in terms of quality and normal operation. There is an extra custom button, which is nice. The grip is a little deeper, which is nice. The rolling shutter is still absolutely awful in video or silent shooting modes.

With the exception that it is not full-frame, it is the first mirrorless camera that has the features needed to satisfy DSLR snobs (I know, I switched from Canon).

PS - If this review helped, or if you're just bored and enjoy clicking things - could I trouble you for a "Yes" vote below?
Read more
1,896 people found this helpful
Go to Amazon.com to see all 166 reviews 4.5 out of 5 stars
Get FREE delivery with Amazon Prime
Prime members enjoy FREE Delivery and exclusive access to movies, TV shows, music, Kindle e-books, Twitch Prime, and more.
> Get Started
Back to top
Get to Know Us
Make Money with Us
Let Us Help You
And don't forget:
© 1996-2020, Amazon.com, Inc. or its affiliates