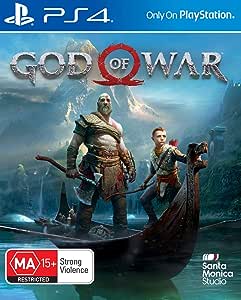 Visit the Sony Store
Platform : PlayStation 4
4.7 out of 5 stars 541 ratings
Currently unavailable.
We don't know when or if this item will be back in stock.

It is a new beginning for Kratos. Living as a man, outside the shadow of the gods, he seeks solitude in the unfamiliar lands of Norse mythology. With new purpose and his son at his side, Kratos must fight for survival as powerful forces threaten to disrupt the new life he has created... A New Beginning - His vengeance against the gods of Olympus far behind him, Kratos now lives as a man in the lands of Norse Gods and monsters. It is in this harsh, unforgiving world that he must fight to survive... and teach his son to do the same Second Chances - As mentor and protector to a son determined to earn his respect, Kratos is faced with an unexpected opportunity to master the rage that has long defined him. Questioning the dark lineage he's passed on to his son, he hopes to make amends for the shortcomings of his past Midgard and Beyond - Set within the untamed forests, mountains, and realms of Norse lore, God of War features a distinctly new setting with its own pantheon of creatures, monsters, and gods Vicious, Physical Combat - With an intimate, over-the-shoulder free camera that brings the action closer than ever, combat in God of War is up close, frenetic, and unflinching. Kratos' axe - powerful, magic and multi-faceted - is a brutal weapon as well as a versatile tool for exploration

His vengeance against the Gods of Olympus behind him, Kratos now lives in the realm of Norse deities and monsters.

It’s in this harsh, unforgiving world that he must fight to survive, and not only teach his son to do the same… but also prevent him from repeating the Ghost of Sparta’s bloodstained mistakes.

This staggering reimagining of God of War combines all the hallmarks of the iconic series – brutal combat, epic boss fights and breathtaking scale – and fuses them with a powerful and moving narrative that re-establishes Kratos’ world.

4.7 out of 5 stars
4.7 out of 5
541 global ratings
How are ratings calculated?
To calculate the overall star rating and percentage breakdown by star, we don’t use a simple average. Instead, our system considers things like how recent a review is and if the reviewer bought the item on Amazon. It also analyses reviews to verify trustworthiness.

Megan
5.0 out of 5 stars Boi!
Reviewed in Australia on 7 August 2018
Verified Purchase
So yes I'm that person who had never played a previous God of War game but was seeing and hearing about everyone playing this new one so decided I was going to buy it and see what all the fuss was about.

I...WAS...NOT...DISAPPOINTED! This game is fantastic! The graphics alone are just beautiful to look at, top it off with the story hundreds of side quests it was hours and hours (not to mention days & weeks) of entertainment. Absolutly recommend to anyone who likes action/adventure games.

Roundtoad
5.0 out of 5 stars Masterful in Every Way
Reviewed in Australia on 20 July 2019
Verified Purchase
One of the best video games on the PS4, and arguably 2018. Strays away from the previous hack-and-slash iteration of the franchise for a much slower, methodical combat system. It has a very simple story, but has great characters (especially the voice acting), great locations, and above all great game-play. Truly a masterful cinematic rendition of a video game.
Read more
Helpful
Comment Report abuse

Edwin Jacob
5.0 out of 5 stars My favourite Playstation game till date (August 2020)
Reviewed in Australia on 3 August 2020
Verified Purchase
The lore, the game play, the graphics, the re-playability, the side quests that are not boring even though its not part of the main story line. Everything about this game is amazing and I haven't come across a game that blew me away like this one did in 2 years (and counting)
Read more
Helpful
Comment Report abuse

Mr420bandit
5.0 out of 5 stars We need a rating higher than AAA for this and HZD
Reviewed in Australia on 24 July 2018
Verified Purchase
Sony pulls another one out of the bag with an amazing exclusive. Was looking forward to seeing the gameplay changes as I wasn’t a huge fan of the originals, job well done guys. I loved the evolution of the gameplay with the callbacks to the original thrown in that make this a God of War title. It was amazingly gorgeous on my Pro and 4K HDR TV. Absolutely superb. Looking forward to seeing where they take this IP in future.
Read more
Helpful
Comment Report abuse

Ashley
TOP 100 REVIEWER
3.0 out of 5 stars Looks great but couldn't get into it
Reviewed in Australia on 5 January 2020
Verified Purchase
I've never the played God of War series but thought would give this one a shot. Played the first section and it was ok but felt like the combat would be pretty repetitive. Unfortunately I couldn't get into it.
Read more
Helpful
Comment Report abuse

Chris
1.0 out of 5 stars Button mashing, and thats it.
Reviewed in Australia on 4 July 2019
Verified Purchase
I liked the scenery, there's obviously a lot of time put into the graphics, painting, rendering etc. But the gameplay itself was nothing more than button mashing: move,block,attack. Was very boring and I played it until the tattooed enemy that apparently doesn't die. I have this up for grabs if anyone wants it... Very overrated game and yet I enjoyed the PSP and previous PS games.
Read more
Helpful
Comment Report abuse

Curtis
TOP 1000 REVIEWER
5.0 out of 5 stars Believe the hype
Reviewed in Australia on 24 April 2018
Verified Purchase
One of the best games ever made, and an absolute triumph in game design/world building. Cannot recommend this game enough, do yourself a favour and pick this game up!
Read more
One person found this helpful
Helpful
Comment Report abuse

Hamish
5.0 out of 5 stars Buy It 5 Stars
Reviewed in Australia on 27 December 2018
Verified Purchase
My Game of the Year was Detroit Become Human but for nearly everyone else it was God of War so I had to give it a try. I still like Detroit but I can't fault this it's really an amazing game deserving of 5 stars and all the awards it gets!
Read more
Helpful
Comment Report abuse
See all reviews

Re
1.0 out of 5 stars Wrong Item
Reviewed in the United States on 1 March 2020
Verified Purchase
Hay Hay
Amazon who are working as the Rebin or induct or the JamClear
WRONG ITEM, this is a PlayStation Hits
Didn’t say that on the Page right Now
Do YOUR JOB RIGHT, try to get the right items in the yellow Tots. Jeez.

James Adams
1.0 out of 5 stars Not original game
Reviewed in the United States on 24 April 2020
Verified Purchase
This is not the game I ordered. This is the PlayStation hits version when I specifically paid more for the original. In addition to this, the disk was loose in the case. False advertising, change your picture.
Read more
3 people found this helpful
Report abuse

musicmaker
5.0 out of 5 stars Exactly what I wanted
Reviewed in the United States on 29 March 2019
Verified Purchase
Fast shipping, perfect condition, love the combat... what else is there to say? I love video games to much to make an accurate judgement of this game in particular lol, but I'm very much enjoying it.
Read more
2 people found this helpful
Report abuse
See all reviews
Get FREE delivery with Amazon Prime
Prime members enjoy FREE Delivery and exclusive access to movies, TV shows, music, Kindle e-books, Twitch Prime, and more.
> Get Started
Back to top
Get to Know Us
Make Money with Us
Let Us Help You
And don't forget:
© 1996-2020, Amazon.com, Inc. or its affiliates