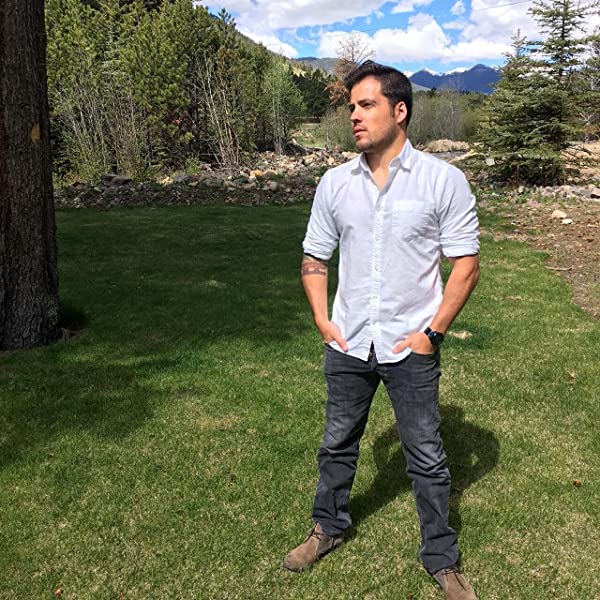 by Nicholas Sansbury Smith (Author)
4.5 out of 5 stars 331 ratings
See all formats and editions
Sorry, there was a problem loading this page. Try again.

Page 1 of 1 Start overPage 1 of 1
Previous page
Next page
Start reading Sons of War on your Kindle in under a minute.

''The Sopranos meets Mad Max ... In a fresh take on the apocalypse, Nicholas Sansbury Smith's Sons of War presents the end of America as a time of horror, transformation, and, for one enterprising crime family, opportunity. Smith's smooth prose and tough cast of characters keep the pages turning at a thriller pace. Never has the end of the world as we know it been so fun to read.''--Craig DiLouie, author of Our War

''A deftly crafted dystopian action/adventure novel that is made all the more plausible by the anticipated coming of a second Covid 19-generated Great Depression...A simply riveting read from cover to cover...Impressively original.'' --Midwest Book Review

''A Mafia family, a team of Marines, and the army of a rogue president fighting it out on the streets of Los Angeles during an apocalypse? That's a hell of a cocktail!'' --David Pedreira, author of Gunpowder Moon

''Jam-packed with compelling characters thrown into a chaotic world of kill or be killed, Sons of War seizes the genre in a death grip!'' --D. J. Molles, New York Times bestselling author

''Much like Mario Puzo's classic, The Godfather, Nicholas Sansbury Smith has created an elaborate and timely lens for us to examine family bonds. Sons of War brings us into an entirely plausible near-future dystopia to shine a light on sons thrust into circumstances of their fathers' making.'' --Thrillerfix

''Smith delivers a great story that hooks you from the first sentence and is impossible to put down. There is plenty of action, and the characters are dynamic and multidimensional. The author who works in emergency management delivers an authentic plot with no BS. Post-apocalyptic books are somewhat of an irony these days given the fact that we are in the middle of the worst pandemic since the Spanish flu. Nevertheless, Sons of War is a great pulse-pounding read that will leave you breathless until the very last page.'' --Portland Book Review (5 stars)

Nicholas Sansbury Smith is the New York Times and USA Today bestselling author of the Hell Divers series, the Orbs series, the Trackers series, the Extinction Cycle series, and the new Sons of War series. He worked for Iowa Homeland Security and Emergency Management in disaster mitigation before switching careers to focus on storytelling. When he isn't writing or daydreaming about the apocalypse, he enjoys running, biking, spending time with his family, and traveling the world. He is an Ironman triathlete and lives in Iowa with his wife, their dogs, and a house full of books.

4.5 out of 5 stars
4.5 out of 5
331 global ratings
How are ratings calculated?
To calculate the overall star rating and percentage breakdown by star, we don’t use a simple average. Instead, our system considers things like how recent a review is and if the reviewer bought the item on Amazon. It also analyses reviews to verify trustworthiness.

Bill Holder
5.0 out of 5 stars This author could make a shopping receipt worth reading
Reviewed in Australia on 30 April 2020
Verified Purchase
The whole flow of the story is just right, the action is hectic and the character development is spot on. Some authors tend to repeat alot of the descriptive work, but in this book you are so hooked that every detail is remembered and doens't need repeating - leaving more time for action and excitement.

I'm hanging out for the next volume

Corinne
5.0 out of 5 stars WOW ! Well done !
Reviewed in Australia on 23 April 2020
Verified Purchase
Sons Of War is a great start to a new series. It's compelling, brutal and scary because it could very well happen. Horrifying to think of the power crime families and gangs have. Very strong storyline and characters.
Read more
Helpful
Report abuse
See all reviews

Chris
5.0 out of 5 stars Incredible!
Reviewed in the United Kingdom on 6 September 2020
Verified Purchase
NSS has done it again! This is an absolutely gripping storyline and is a real page turner, you will not want to put this book down!
Read more
Report abuse

Wendy
5.0 out of 5 stars A Thrilling Clash of the Police, the Mafia and the Military
Reviewed in Canada on 20 March 2021
Verified Purchase
Set in a post apocalyptic period “Sons of War” the first in the series opens with mafia leader Don Antonia Moretti and his decimated family fleeing Naples for the United States after being betrayed at a funeral. In the U.S. a major economic collapse has left the population struggling to survive as domestic terrorism and protests grow, and civil war rumors abound. Using the madness to increase his fortune as he schemes to rebuild his criminal empire Don Antonia begins to buy weapons and drugs from rival cartels and gangs.

Meanwhile Marine Sergeant Ronaldo Salvatore and his platoon, the Desert Snakes are recalled with the troops to support the effort to stop the chaos from escalating. Fearing for his family he's forced to make a choice and returns to L.A. to protect his family as the violence increases.

Weaving together the mafioso, the police and the military into the lawlessness of a period that has a civil war ravaging across the U.S., intensity and suspense begin to escalate as Salvatore temporarily breaks away from his platoon to save his family; his son Dominic joins the police as the violence in the city escalates; the President is assassinated; Don Antonio kidnaps Carly Sarcone to strike down an old enemy; and uses the corruption to fuel his ambition. Fast-paced and action-packed this well-written and absorbing tale of a battle for supremacy between forces of good and evil keeps you on the edge of your seat as tension rises with battles, murder, betrayals, and treachery that has Don Antonio increasing in power while Sergeant Rinaldo, his platoon, son Dominic and the police force contend with the anarchy that plagues their city.

Among a host of compelling characters is the egotistical, dishonest and stubborn Don Antonio Moretti who wants to resurrect his criminal empire in L.A.; the courageous soldier/marksman and loving , apprehensive, and protective family man Sergeant Ronaldo Salvatore; as well as his son the smart, brave and fit Dominic Salvatore. These characters and others fuel the excitement, tension and power of the story as it rushes towards a climax that begs for a second book.

I enjoyed and highly recommend “Sons of War” as the author brings to life a darkly chilling tale of two families; one bent on power, the other to save their family and society from the rising threat of violence that is destroying any remnant of the world they once knew.

Marcos Luz
5.0 out of 5 stars Spectacular
Reviewed in Brazil on 22 January 2021
Verified Purchase
Nicholas did a great job here. He got the mafia, gangs, arms, cops, and dirty cops in the same city to fight for control. Nicholas also goes beyond that and kind of did an x-ray of every each one of those groups’ styles to get the top control of Los Angeles. Ronald, Dominic, and Dom Antonio are en route to an epic crash. Eager to read the second volume.
Read more
Report abuse

Jon Spielman
5.0 out of 5 stars Excellent
Reviewed in Germany on 31 May 2020
Verified Purchase
A wonderfully refreshing new book from this Author. Captivating, and for sure one of those books you really don't want to have to put down. Well written, and scarily, I could see some of the plot scenario's actually happening. The only bad thing I can say, is now I have to wait for the next book, in what I hope is going to prove to be a longer, and wonderful series!
Read more
Report abuse

shane
2.0 out of 5 stars Read
Reviewed in Canada on 5 November 2020
Verified Purchase
I found the characters very stereotypical and one sided to current terms. To much virtue signaling for me. Maybe cause iam dating a Spanish girl it made me not see the authors take on individuals.

My own self expectation, I expected to be more involved in the war they where surrounded by.

It's like there was tons of ideas being quickly placed into the story, jumping all over, in different time spans that missed interesting situations.

I rare miss for me with the writer.
Read more
Report abuse
See all reviews
Back to top
Get to Know Us
Make Money with Us
Let Us Help You
And don't forget:
© 1996-2021, Amazon.com, Inc. or its affiliates