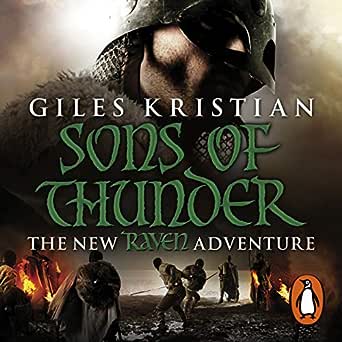 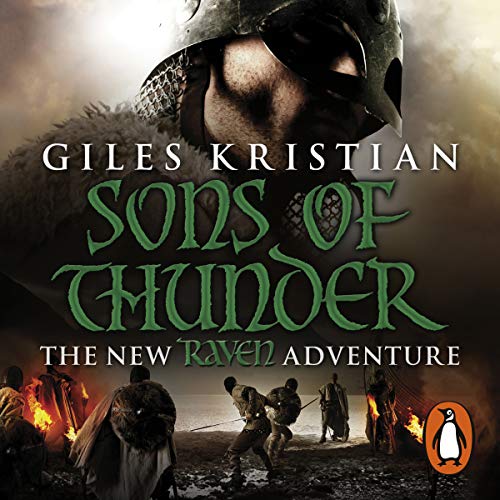 4.6 out of 5 stars
4.6 out of 5
396 global ratings
How are ratings calculated?
To calculate the overall star rating and percentage breakdown by star, we don’t use a simple average. Instead, our system considers things like how recent a review is and if the reviewer bought the item on Amazon. It also analyses reviews to verify trustworthiness.

Kevin Robson
5.0 out of 5 stars Fellowship of the Vikings
Reviewed in Australia on 27 August 2016
Verified Purchase
Raven and Sigurd's fate has became more intertwined as the Great Jarl takes his fellowship of fighting men into old France on a Viking's journey of fighting, plundering and partying. A great adventure to be read by those of a liking for gory Viking tales.
Read more
Helpful
Comment Report abuse
See all reviews

SJATurney
5.0 out of 5 stars A constant surprise
Reviewed in the United Kingdom on 3 May 2012
Verified Purchase
I so enjoyed the first Raven book that I wasted little time launching into the second. It started just as I expected, launching into a continuation of the story from Blood Eye, with just as much 'oomph'. I was hooked.

However, Sons of Thunder is a different novel. Not what I expected and certainly not just a continuation of the story, though it does do that admirably too.

The first book had been a rip-roaring constant barrage of action and battle, heroics and betrayal, sneak attacks and audacious plans. Sons of Thunder built for only a couple of chapters on the same theme before sweeping all the plans from the table with surprise actions and decisions by the principal characters.

Suddenly I found I was reading more of an epic journey than an action fest. The story slowed into a languid, highly atmospheric and often tense journey, bringing the reader into an intimate understanding of what life would be like among the brotherhood of Sword-Norse aboard their dragon ships. I will say straight away that this was a surprise direction as far as I was concerned for the story to take, though in no bad way. Indeed, it lent a new freshness and interest to the tale.

I did, however, wonder really where the tale was going to go. I found myself thinking ahead and trying to see how the story might pan out, never quite able to work it all out.

And then, again, somewhere around two thirds of the way through the book, the direction changed once more, and suddenly the pace was breakneck, every bit as exciting and action-packed as Blood Eye. Indeed, I would say that Giles packed into a third of this book as much excitement as there had been in the first novel of the series, an achievement for which I doff my cap to him.

The story leaps and turns and twists in so many unexpected ways that I find it hard to describe how much I enjoyed it, and it builds to the very end to a moment that will be a defining one in the saga for me; one of those 'Lo, there do I see my father' moments from 13th Warrior (thanks Giles). It sets up the third tale beautifully and makes it almost impossible to pause before launching into that book (which I have just done).

The characters continue to entertain and build, some departing their life in appropriate manners, other previous unknowns coming to the fore. Raven himself continues to become stronger and more sure, and my personal fave remains Floki.

The highlight of the book for me was (without spoilers) the manner in which the Norsemen reacted and adapted to what was, for them, a thoroughly alien environment. It was masterfully done.

D. L. J. Kite
4.0 out of 5 stars Sons of Thunder
Reviewed in the United Kingdom on 20 April 2018
Verified Purchase
Another great Raven tale, if possible even better than the first one. If you like your drink strong, your women big breasted and willing, your violence blood drenched, then this book is for you. In a world where men like Raven are born warriors and proud Norsemen. Take a journey with Raven one of which the like of a civilised man has never imagined, and be reborn a Viking. Fab
Read more
Report abuse

Tanner
5.0 out of 5 stars A Stonker!
Reviewed in the United Kingdom on 6 July 2011
Verified Purchase
This was a brilliant read for me as a weathered historical fiction reader. The grusomeness of the tale and the brilliantly realistic character's that are built up act to put you right into the heart of the Wolfpack, amongst the men that you will soon feel that you have always known. I cannot recommend this highly enough for anyone who has even the vaguest interest in history. Historical fiction readers will appreciate this story and the reality of the characters and the concrete facts hidden amoungst all that exciting fiction. You will, like myself, get wrapped up in the saga tale as you race along at a thunderous pace enthralled with excitement and expectation! Even better than the first - also worth buying before you read this! Only drawback I could think of is that I can't help comparing it to Bernard Cornwell's Saxon stories!!! Also worth a look! I hope this helped and my congratulations to Giles the author of this soon-to-be epic!!!! Raven: Blood Eye
Read more
Report abuse

Amanda
5.0 out of 5 stars Extremely good!
Reviewed in the United Kingdom on 18 October 2020
Verified Purchase
Unbelievably, this book is even better than Raven 1! Again, somewhat mach and coarse, but a 'proper' story which takes you on a fulfilling journey of love, life and laughter.
Read more
Report abuse

Je Salter
5.0 out of 5 stars Sons of Thunder!
Reviewed in the United Kingdom on 12 July 2011
Verified Purchase
Another excellent book from Giles Kristian in the second book of the Raven series. With great characters and one of the best 'single combat' scenes I've ever read, this is a must for anyone even remotely interested in novels about Viking era. The two long boats set sail across the English Channel and fight for their jarl whilst trying to sell the 'treasure' they obtain in England.

I found the book to be in three major parts, the opening section that went at 100mph, a middle section that slowed the pace and then the final third that accelerated again to keep you reading. Overall well worth five stars, now for the latest in the trilogy.
Read more
One person found this helpful
Report abuse
See all reviews
Get FREE delivery with Amazon Prime
Prime members enjoy FREE Delivery and exclusive access to movies, TV shows, music, Kindle e-books, Twitch Prime, and more.
> Get Started
Back to top
Get to Know Us
Make Money with Us
Let Us Help You
And don't forget:
© 1996-2020, Amazon.com, Inc. or its affiliates