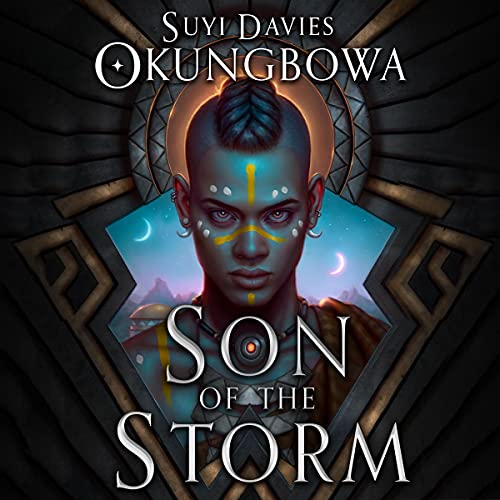 Son of the Storm: The Nameless Republic, Book 1

S. Naomi Scott
4.0 out of 5 stars A truly remarkable story that stands head and shoulders above more traditional fantasy
Reviewed in the United Kingdom on 13 June 2021
Verified Purchase
My rating: 4.5 of 5 stars

In the ancient city of Bassa, an outsider with pale skin arrives with a magic that most believe to be no more than a myth. For the young scholar Danso, the outsider represents a way to escape the limitations of the life planned out for him, while for Danso’s intended, Esheme, and her mother Nem, the magic that the outsider brings represents a path to a power greater than she ever imagined possible. But there is more at stake than any of them realise, and before long the very fabric of Bassai society begins to unravel.

This is not your typical western fantasy novel, based as it is in a West-Africa inspired setting. While there are elements of the Bassai culture and society that might seem familiar to most readers, the core of the book, and the way in which the different castes and groups interact with each other, and the stratification of the society as a whole, makes for an intensely different experience to the traditional fantasy tale most of us have grown up with. And honestly, this alone makes Son of the Storm one of the best new fantasy books I’ve read in a long time.

The setting is remarkably well established, bringing in elements of ecological collapse, colonialism, and colourism that might not necessarily make it into a more western-based work. It also has one of the most intriguing magic systems I’ve come across in a long time, with very clearly defined consequences for the magic users, as well as set rules on who can use the magic, and how. That said, the magic itself only plays a minor role in the story, with most of the narrative being centred on the characters, their interactions with each other, and the way their individual journeys are inextricably linked.

Written in a style that carries more than a hint of the author’s Nigerian heritage, the narrative starts off quite slowly, but once the action starts to heat up, the flow of the story increases, and before long you’re being pulled along at a crazy pace. You feel Danso’s awe and wonder as he begins to learn the truth of outsider Lilong’s origins and abilities, but you also feel Lilong’s fear of the potential for upheaval Danso and the rest of the Bassani represent. With Esheme and Nem, you are drawn along by their need to master the power that has dropped in their hands, though you are never left in any doubt that should they succeed, the outcome will be bad for everyone else. Even the ostensibly secondary characters, such as Zaq and Biemwensé are given their full measure of development along the way, and voices of their own which stand out in the narrative. If this is any indication of the sort of writing we can expect from Okungbowa going forward then I am genuinely excited to see more.

If you want to read something new and different, then this is one I’d strongly recommend. I’m not quite ready to give it a full five stars just yet, but it’s not far off. A decent four-and-a-half stars, and strong desire to read the next part of this truly remarkable story.
Read more
One person found this helpful
Report abuse

Dan Williams
3.0 out of 5 stars Reasonable
Reviewed in the United Kingdom on 27 June 2021
Verified Purchase
A perfectly ok reading with a few weak points.

I like finding fantasy books written for older than YA and that don't build their worlds based on medieval Europe. This ticked all those boxes, save maybe erring a little towards Y'er A's. The story of a hitherto exiled and pronounced lost race resurfacing was pleasantly tantalising.

Points off for a little too much rambling prose and somewhat weakly distinguished characters (their personalities were brute-force spelled out more than defined by their actions and the way others saw them).

Overall, sometimes I felt as if I was hearing the author's voice rather than the characters' voices.

Kathrin F.
5.0 out of 5 stars Discover an epic new fantasy world!
Reviewed in the United Kingdom on 14 May 2021
Verified Purchase
I had the pleasure of reading a digital ARC via #netgalley and throughly enjoyed immersing myself in this new world inspired by African folklore. Son of the Storm has all the right elements, spun together into a rich and compelling story: brilliant and intricate world building, a cast of complex characters, a flawed political system, the stirring of a revolution and ancient powerful magic. I enjoyed following the three main characters, and watching their paths converge.

My physical copy of the book arrived today - testament to how much I enjoyed this first installment in The Nameless Republic series. I am already waiting for the next book...

5.0 out of 5 stars Discover an epic new fantasy world!
Reviewed in the United Kingdom on 14 May 2021
I had the pleasure of reading a digital ARC via #netgalley and throughly enjoyed immersing myself in this new world inspired by African folklore. Son of the Storm has all the right elements, spun together into a rich and compelling story: brilliant and intricate world building, a cast of complex characters, a flawed political system, the stirring of a revolution and ancient powerful magic. I enjoyed following the three main characters, and watching their paths converge.

My physical copy of the book arrived today - testament to how much I enjoyed this first installment in The Nameless Republic series. I am already waiting for the next book...

NJK
3.0 out of 5 stars Sounded interesting from the blurb, but disappointing in its execution
Reviewed in the United Kingdom on 25 July 2021
Verified Purchase
The premise of this book sounded good, but once you start reading it's really hard to stay interested. The writing and storyline just aren't up to it. Good effort, but I don't think I'll be reading any more by this author.
Read more
Report abuse

This novel is about a genius but somewhat reckless young scholar in the nation of Bassa who is nevertheless subject to racism due to the fact that he is biracial and has light-brown skin compared to the darker Black skin of the majority of the Bassai populace. Danso has a sharp memory and can remember whatever he reads, which gives him a spot high in society despite his ethnicity. He is engaged to a woman named Esheme, a skilled woman from the counsel guild of mainland law. Their relationship is very terse and not quite loving, although they get along fairly enough since both have suffered discrimination with Esheme's mother being from a lower caste.

Throughout the novel, Danso will discover that obscure notions of magic written about by a previous Emperor who was known as a madman were not all false, and that there are people out there willing to commit torture and murder if that is what it takes to secure the artifacts to use this forgotten magic. It will change his life and that of his family forever, and Danso's strength and level of perseverance will be tested to its limits.

This is a must-read book for Fantasy lovers, and for lovers of Black fantasy fiction in general. Five stars, all the way.
Read more
12 people found this helpful
Report abuse
See all reviews
Back to top
Get to Know Us
Make Money with Us
Let Us Help You
And don't forget:
© 1996-2021, Amazon.com, Inc. or its affiliates